Jeff Bezos, the one making $150,000 a minute as CEO of Amazon, has announced that he plans to sink more money into his space company, Blue Origin, to the tune of $1 billion a year. Still a drop in the bucket for him, but it’s a commitment, anyway. 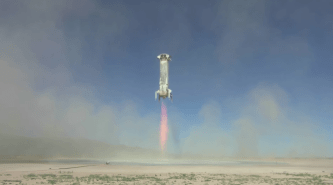 At what point is pouring money into redundant technology irresponsible?

“I will not spend one minute of my life on anything that I don’t think is contributing to civilization and society,” Bezos responded to journalist Steven Levy, when asked about his $150 billion fortune. Specifically, Levy asked if it would be better spent solving practical problems like poverty, rather than space travel. “You want risk-taking. You want people to have visions that most people won’t agree with. If you have a vision that everybody agrees with, you probably shouldn’t do it because someone else will do it first. All of the real needle-movers are driven by being right when most of the world is wrong.”

In fact, he’s of the opinion that all of humanity will need to live somewhere in space once we’ve exhausted all of the resources here. I suppose it’s a better vision than some have, of the wealthy escaping the planet and leaving the rest of us behind.

Amazon finally caved on wage increases recently, after being pounded in the news cycles for poverty wages that caused 1/3 of its workforce to depend on Medicaid and welfare to get by.

Of course, it famously then removed production-related pay bonuses and seniority-related stock benefits immediately after.

Blue Origin’s test of its emergency ejection and landing protocol

Meanwhile, if you haven’t seen the Blue Origin test of an interestingly-shaped rocket that 1) ejected — at high speed — the capsule that would contain people, in the event of an emergency and then 2) successfully landed the rocket booster afterward, go ahead.

What lies in store for humanity? Theoretical physicist Michio Kaku explains how different life will be for your descendants—and maybe your future self, if the timing works out.
▸
with
Michio Kaku
Up Next
Neuropsych

Infographic: Who and what do people fantasize about?

A new survey asks Europeans and Americans to share their imaginary lives.