In a 1608 letter to his friend Galileo Galilei, the German astronomer Johannes Kepler described his idea for space travel thusly:

“Provide ships or sails adapted to the heavenly breezes, and there will be some who will brave even that void.”

Observing one of the 75-year transits of Earth by what would come to be known as Halley’s Comet, he’d correctly intuited that the widening of that comet’s tail, or coma, was produced by sunlight pushing material out and away from the main object.

Now — no later than June 24, 2019, as of this writing — the Planetary Society will be launching what they hope will be the first controlled light sail ever to enter and maintain Earth orbit. Their crowdfunded Lightsail 2 will ride aboard a Space X Falcon Heavy rocket departing from Launch Complex 39A at NASA’s Kennedy Space Center in Florida for a year-long orbit.

“This is history in the making — LightSail 2 will fundamentally advance the technology of spaceflight,” says Bill Nye, CEO of the Planetary Society.

The pieces of Kepler’s dream have been falling into place bit by bit since that letter to Galileo. The discovery of photons in the late 1800s by James Clerk Maxwell revealed the energetic particles in light whose momentum could be transferred to other objects.

Friedrich Zander envisioned the “tremendous mirrors of very thin sheets” propelling craft through space, and then Carl Wiley foresaw a solar sail as a shiny, reflective, parachute-like material opening in the direction of sunlight.

By 1976, Carl Sagan went on TV to show off a demonstration model of a light sail craft, enthusing about the amazing technology and its potential.

Among Sagan’s students some 40 years ago was Nye, a frequent Big Think contributor. The Society was founded by Sagan, Bruce Murray and Louis Friedman in 1980. In 2005, the Society launched the world’s first light sail craft, the Cosmos 1, aboard a submarine-based ICBM. Unfortunately, it was lost when the ICBM failed before allowing Cosmos 1 a chance to fly on its own.

About the Planetary Society

The Planetary Society is the world’s largest non-profit space organization, crowdfunded by over 50,000 members from over 100 countries, and supported by hundreds of volunteers. The Society was founded as outlet for the general public’s interest in space, a level of interest not always reflected in governmental budgets. In addition to mounting projects such as the LightSail craft, the Society serves as an educational connection between the scientific community and the general public, advocates for robust governmental funding of space programs, and provides anyone an opportunity to get involved in some real space science. 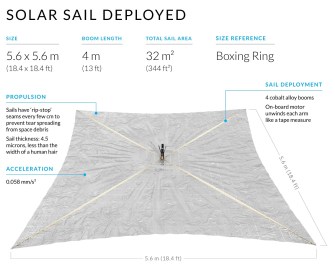 At the center of each frankly beautiful LightSail craft is a cubesat. While we tend to think of satellites as large, bus-sized objects, they can be much smaller for simpler missions. The cubesat for the upcoming LightSail 2, for example, is about the size of a loaf of bread.

The sails themselves are four shiny Mylar sheets 4.5 microns thick — that’s thinner than a human hair. They’re next pulled outward by four cobalt-alloy booms that extend like tape measures. The process takes about three minutes. When deployed, the triangular sails together form a square that’s just 32 square meters, about the size of a boxing ring.

The primary force to be overcome by LightSail craft is atmospheric drag, its collision with gas particles in the Earth’s upper atmosphere. Think of it as friction that causes a satellite to slow and thus drop from orbit. In order for a craft to catch enough photon “propellant” — and to be high enough to get away from the upper atmosphere, its orbit needs to be above about 700 kilometers. 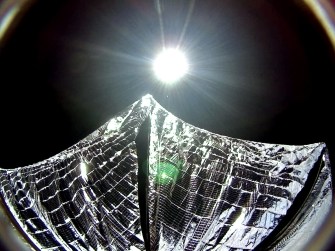 Around 2014, NASA offered the Society a free ride aboard an Atlas V rocket as part of the agency’s Educational Launch of Nanosatellites (ELaNa) program. Even though the Lightsail craft would be placed into orbit below the necessary 700-kilometer height, the Society decided to use one of their LightSails to test the mechanics of the sail deployment system.

Dubbed “LightSail 1,” the sails successfully unfurled, as this selfie taken by LightSail 1 attests.

This time, LightSail 2 will be carried within another, slightly larger satellite, Prox-1, developed by students at Georgia Tech. The Prox-1 will be placed into orbit around 720 meters up, and a week later will launch LightSail 2.

After a few days of diagnostics, LightSail 2 will open up its solar arrays, and then a day later, unfurl its sails. Over the next month, it will continually re-position its sails relative to the sun to raise its orbit — this is the main part of the mission, the actual solar sailing.

Mission complete, the craft will orbit for about a year before drag takes its toll, and LightSail 2 burns up plummeting down through the atmosphere. During this year, its position will be tracked via ground-based laser ranging, and it may be visible to the naked eye. The Society will offers an online dashboard that can tell you where and when to look up to se this most elegant spacecraft.

Albert Einstein is synonymous with genius. While we’re all aware of his outstanding contributions to science, much of his brilliance is incomprehensible to us because it pertains to such an […]