An encroaching erosion of local community has been a subtle force in the past century. Local politics has been hit the hardest. That feeling of polarized politics at every turn might just be because of the loss of local newspapers and community-focused journalists, who tend to cover public figures more neutrally than their national counterparts. A recent study, published in the Journal of Communicationin November of 2018, has found that there is a direct correlation between America’s ongoing polarization and the increasing lack of local media.

As there becomes fewer or occluded opportunities to learn about your local politicians — aside from the regularly scheduled hit-piece delivered to your door by the opposition — citizens are increasingly relying on their tribal party lines when voting for local representatives. Cable news and sprawling internet partisan news sources are transferring their national views and biases on voters, who, in turn, apply that to their localities. 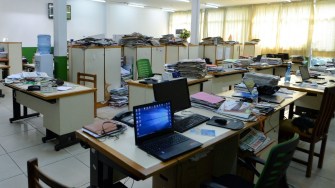 The researchers found that party affiliation is a “cheap source of information available to voters.” When these cues are seen during low-information down-ballot races, voters are more likely just to vote for the party affiliation rather than on the merits of the candidate. It’s been found that adding party labels to the ballot has made down-ballot local outcomes align with national contests.

The problem here is simple. There is no feasible way for a national news channel or internet publication to keep up with what’s going on in your local jurisdiction. Between chasing lowbrow celebrity tweets and showcasing the latest scandal circus, they barely have enough time for any real issues as it is. To this point the authors state:

National outlets do not have the space, time, nor interest to cover 535 legislative offices, much less 50 state governments and thousands of municipal governments…

Now add in the fact that local newspapers are decreasing and the root of the problem becomes evident. Local news tends to focus on actual tangible facts of reality. Like when is the street you live on going to be torn up or what does the new tax proposal entail for a rehab of the public library. Additionally, the representatives who are going to work on getting this done are pitching their ideals and practical solutions.

For the most part, this system is far divorced from the farce circus show most channels peddle as news.

Local news provides subnational officeholders a venue to cultivate their “personal vote,” touting service and accomplishments to the local constituency and serving as a bulwark against a rising national tide of mass partisanship.

The researchers found that in local newspapers, the coverage of members of Congress was considerably more positive when compared to national coverage. The majority of stories were neutral, while 25 percent were positive and only 5 percent negative.

The internet has exacerbated the problem

Although in theory it’s easier now than ever to startup a publication online, the opposite has occurred. While there is a low-cost entry for local newspaper markets, researchers found that the new traffic is too low to actively sustain a healthy level of reporting:

Would-be online venues for local news are losing out to national news, and the internet has not produced more local news outlets as predicted.

Most reports show that local news accounts are barely a minor fraction of most online traffic.

Nothing has been able to replace local newspapers — neither online mediums nor television. For example, in regard to local television channels replacing the news, researchers state the following:

Local television news also cannot and does not sufficiently fill the gaps left by local newspapers. Time constraints imposed by the need for ads, sports, weather, disasters, and traffic leave only a minute or two for coverage of subnational politics.

Without these centers of localized information, voters are held to the sway and shifting opinion of an abstract national voice. It is the local community that needs to inform the national, not the other way around.

The key to Finland’s success is to view education not as a privilege, but a right.