They’re called MERMAIDs. They’re drifting seismometers that listen to movements of Earth’s crust pulsing through the waters of previously unmonitored reaches of the oceans, the two-thirds of the Earth that’s inaccessible to stationary seismic detectors.

Scientists can glean a tremendous amount of information from seismic data about the inside of the planet. If they have that data, that is. The first results of their journeys were published this month in Scientific Reports (paywall). They offer an unprecedented peek at what’s going on beneath the Galapagos. 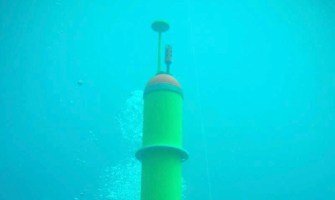 The MERMAID project is the brainchild of Princeton geoscientist Frederik Simons. “Imagine a radiologist forced to work with a CAT scanner that is missing two-thirds of its necessary sensors,” he tells Phys.org. He and colleague Guust Nolet have been developing their system for 15 years.

Each “MERMAID” is a floating seismometer/hydrophone set free to drift where it will, and together they form a seismographic network. “MERMAID” stands for “Mobile Earthquake Recording in Marine Areas by Independent Divers.”

They generally float at a depth of 1,500 meters. But when they pick up audio that may signify the start of an earthquake, they rise to the surface, taking no longer than 95 minutes to get there, poke their heads out of the water to acquire their location via GPS, and transmit the data they’ve collected.

The nine MERMAIDs have just completed their first two-year tour of duty. 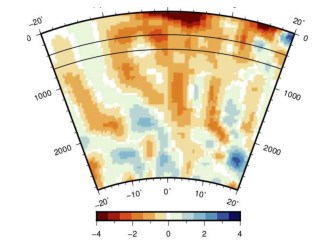 This shows the speed of seismic waves moving through the Earth from the surface at the top of the cross-section down to about 2,890 km deep at its bottom edge. Darker colors signify slower wave movement. Image source: Princeton University

What the MERMAIDs found

The MERMAIDs drifted through an area ranging from about 20° north to 20° south centered on the Galápagos Islands. Their data revealed the volcanoes on the islands are fed hot rock via a narrow conduit that extends downward to about 1,200 miles (1,900 km). Such a deep ocean “mantle plume,” a phrase coined by geophysicist W. Jason Morgan, who hypothesized their existence in 1971, has never been imaged in detail prior to the deployment of the MERMAIDs.

The high temperatures they recorded is of special interest. Ever since observations have contradicted Lord Kelvin’s 19th-century proposal that the Earth should be cooling quickly, scientists have wondered why the Earth has somehow managed to remain at a fairly constant temperature instead. The new research suggests an answer.

“These results of the Galápagos experiment point to an alternative explanation: the lower mantle may well resist convection, and instead only bring heat to the surface in the form of mantle plumes such as the ones creating Galápagos and Hawaii.”

Next up is a new fleet of some 50 MERMAIDs to be released in the South Pacific with the aim of learning more about the plume region beneath Tahiti. That project will be led by Chen Yongshun of Southern University of Science and Technology, who enthuses, “Stay tuned! There are many more discoveries to come.”

At the Great Lakes Shipwreck Historical Society in Michigan, retrieving sunken vessels is the order of the day. Here’s how they do it.
Technology & Innovation

What are dormant volcanoes good for? Copper mining

Instead of digging for metals, we could extract them from salty, subterranean water.
Surprising Science

To date, only one research vessel has ever encountered a milky sea.
Hard Science

Scientists track down a puzzling early burst of oxygen on Earth.
Up Next
The Present

Who would’ve thought that never seeing blue sky would bum you out?