Imagine a city that manages to combine nature and technology harmoniously, a self-sustaining metropolis where green space is punctuated by modern buildings and the bustle of city life.

Such a city is currently in works, as Milan-based architecture firm Stefano Boeri Architetti has just announced plans for a smart “forest city” near Cancun, Mexico that will be able to provide all of its food and energy. 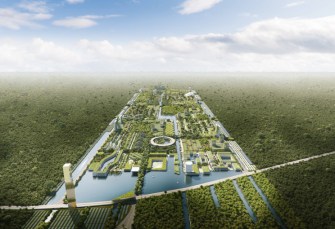 An aerial view of the proposed city. Notice the surrounding green space and extensive canal system.

According to the firm’s press release, the city will cover 557 hectares, 400 of which will be green spaces containing 7,500,000 plants. Designed for 130,000 people to live and work there, it will feature a wide variety of housing types to accommodate the needs of its residents.

The economy of the city will be circular, with all of its food, water, and energy needs being self-generated. The designs also include a grand research center so that the city can host university departments, conferences, and curious scholars of all ages.

The city even has plans to improve the way we interact with our data. The architects told Dezeen that “Big data management is used to improve the governance of the city, hence, the life of its citizens. Sensors are distributed within the building fabric: they collect and share relevant information, which is then centrally analyzed and turned into suggestions in support of everyday life. For example, by mapping on an app the expected outdoor comfort experience within certain areas of the city.”

This data will be handled with “full respect of the privacy of the citizens.”

If all goes according to plan, the city will be built on an area currently used as a sand quarry for hotels that is tentatively scheduled to become a shopping center. 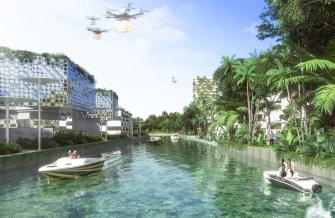 Can it really be self-sustaining?

The city is designed to fully sustain itself through an ingenious system of energy production and water desalination. A ring of solar panels will surround the city, generating enough power for all of the inhabitants. Water will be pulled from the Caribbean and desalinized using a solar tower. This water would be used to irrigate crops through a system of navigable canals.

Transportation will be handled by an entirely electric public “Mobility in Chain” transit system. Cars will all be left outside of the city.

What carbon emissions there are will be captured by the endless plants. The firm notes, with evident pride, that “thanks to the new public parks and private gardens, thanks to the green roofs and to the green facades, the areas actually occupied will be given back by nature through a perfect balance between the amount of green areas and building footprint. The Smart Forest City will absorb 116.000 tons of carbon dioxide with 5.800 tons of CO2 stocked per year.”

While it currently only exists on paper, the visionaries who have dreamed this plan into existence hope the city can be an example for the world and a testing place for ideas on sustainable urbanism. It will join the ranks of several other smart cities that have been proposed as ways to improve our existence, make the world more sustainable, and move beyond the limitations of our current urban planning paradigms.

“My dad asked me if I had been to tutoring and I lied… Then he showed me the tablet.”
Strange Maps

It’s on a 100,000-year timescale, though, so the next few centuries might not be so comfortable.
The Present

The larger truth on the streets is that no one uses just one drug anymore.
Up Next
Life

Consciousness in the cloud?

Brain uploads and what matters for future human flourishing.