As America chooses its next President, a new study suggests that even the most powerful and best-run empires have collapsed under leaders who broke social contracts.

The anthropology study took a deep dive into 30 pre-modern societies and found that even those that had “good” governments were not immune to catastrophic demise. In fact, societies where the government provided goods and services and prevented drastic inequalities of wealth and power, tended to fall apart even more dramatically than those who had despots. One commonality in the destruction of such societies – the failings of leaders who gravely weakened them by tearing apart societal ideals and morals.

Many pre-modern societies were similar to ours, even exhibiting what we can expect in contemporary democratic countries, explained Gary Feinman, the MacArthur curator of anthropology at Chicago’s Field Museum, who was also a co-author of the study.

“The states that had good governance, although they may have been able to sustain themselves slightly longer than autocratic-run ones, tended to collapse more thoroughly, more severely,” said Feinman in a press release.

The study’s lead author, Richard Blanton, a professor emeritus of anthropology at Purdue University, thinks that the degradation of such societies could have been anticipated and even prevented, but singular leaders managed to shake them up to the point where there was no turning back.

“We refer to an inexplicable failure of the principal leadership to uphold values and norms that had long guided the actions of previous leaders, followed by a subsequent loss of citizen confidence in the leadership and government and collapse,” pointed out Blanton.

A particular focus of the study were four societies that lasted for hundreds and in some cases thousands of years: the Roman Empire, the Ming Dynasty of China, India’s Mughal Empire, and the Venetian Republic. All of these had relatively even breakdown between the haves and the have nots, although they did not hold popular elections.

As there were no exact equivalencies to modern democracies in ancient times, the anthropologists used other points of comparison like the main features of good governments, which meet the needs of their people.

“They didn’t have elections, but they had other checks and balances on the concentration of personal power and wealth by a few individuals,” Feinman elaborated. “They all had means to enhance social well-being, provision goods and services beyond just a narrow few, and ways for commoners to express their voices.”

Such governments provided necessary “communication and bureaucracies to collect taxes, sustain services, and distribute public goods.” In this way, the economy was both helping the people and funding their leadership.

These societies lasted longer than those ran by autocrats or small power groups, but their collapses had worse effects on their citizens who came to rely on the government support for their lives. If a dictator-led country fell apart, the economic transformation was likely less pronounced as these leaders monopolized all resources and did not rely as heavily on taxation. It also stands to reason that people in such nations could have already been living worse due to the unethical behavior of those in power. 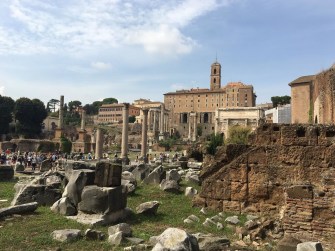 The ruins of the Roman Forum, which served as representational government.Credit: Linda Nicholas / Field Museum

What were the qualities of a leader who could shake up and ultimately destroy a previously well-governed country?

“In a good governance society, a moral leader is one who upholds the core principles and ethos and creeds and values of the overall society,” related Feinman. “Most societies have some kind of social contract, whether that’s written out or not, and if you have a leader who breaks those principles, then people lose trust, diminish their willingness to pay taxes, move away, or take other steps that undercut the fiscal health of the polity.”

The obvious connection to the present is that any society can fail, no matter how powerful or virtuous, as it’s a “fragile human construct,” stated Professor Blanton. Living off of past glory is no guarantee of future success, if you choose leaders who are willing to disrupt the society for their own benefits and immoral pursuits.

Check out the study “Moral Collapse and State Failure: A View From the Past” in Frontiers in Political Science.

No bread, no circuses: The Olympics and climate change

Perhaps downhill and cross-country skiers don’t face the fate of potters, typesetters and saddlers, but their situation is certainly unclear.