There are some rankings no nation wants to lead.

Yemen has just been named most fragile nation in the Fund For Peace’s 2019 Fragile States Index. The least fragile state is Finland. 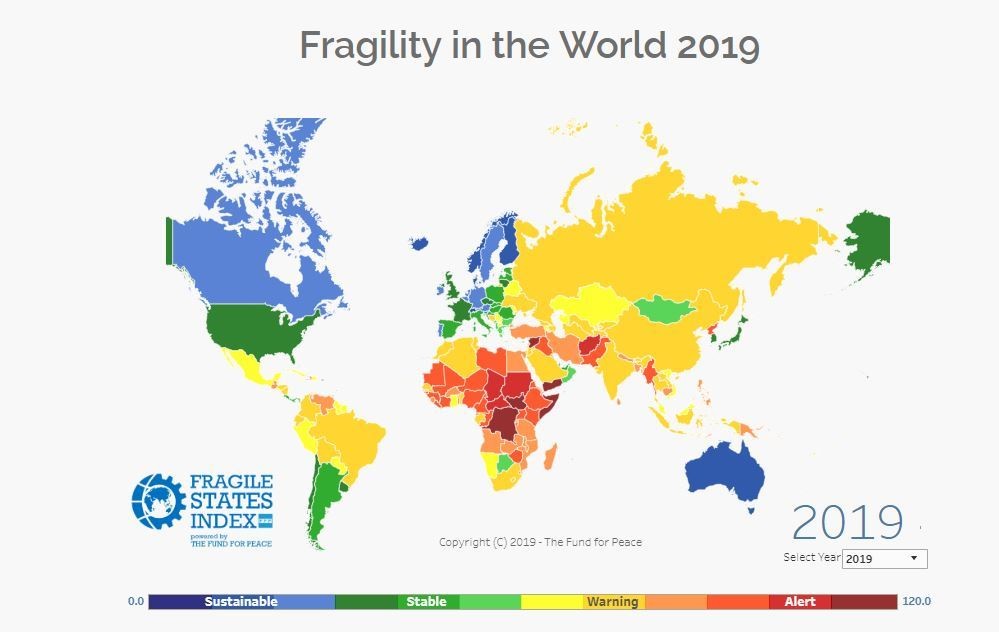 Between these two countries lies the whole spectrum of national stability. The good news is that conditions for most of the world’s people are slowly improving, says JJ Messner, Executive Director of the Fund for Peace. “For all the negative press, there is significant progress occuring in the background,” he says.

The five most fragile countries, which comprise the index’s Very High Alert category, are Yemen, Somalia, South Sudan, Syria and the Democratic Republic of Congo. In the High Alert category are the Central African Republic, Chad, Sudan and Afghanistan. Venezuela and Brazil tied for the title of the Most Worsened Country. Politics have riven both nations. Venezuela’s election last year compounded long-standing economic and social woes. Brazil’s score has declined in each of the past six years as economic troubles, corruption and declining public services have taken their toll. 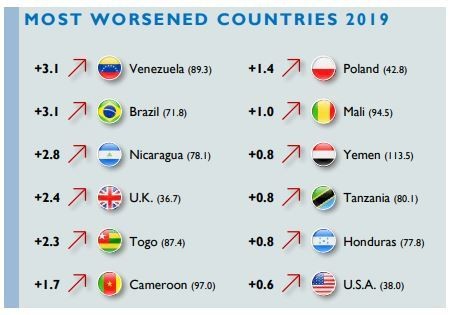 Other nations whose rankings fell steeply in the 2019 list were Nicaragua, the United Kingdom, Togo, Cameroon, Poland, Mali, Yemen, Tanzania, Honduras and the United States. Libya, Syria, Mali, Yemen, Venezuela, and Mozambique were the fastest declining countries of the past decade.

Any UK citizens alarmed at seeing their nation ranked as the fourth most-worsened will find that three of the 12 indicators used to compile the index were largely behind the low score: the behaviour of ruling elites, social divisions and state legitimacy.

The authors point to the influence of Brexit as a factor. But they say that long-term worsening of the UK’s score predates the country’s referendum on membership of the European Union. Even before 2016, the authors say the UK had the seventh worst trend for the same three indicators, and suggest the country’s problems are deep-rooted and unlikely to be solved by leaving the EU.

The US made it into the Most Worsened category thanks to poor scores in the same categories as the UK plus a sliding score on human rights and respect for the law, in part reflecting political divisions, legal controversies and the issue of immigration.

The report’s authors also detect the stirrings of a second Arab Spring in Algeria, Morocco and Tunisia. They say economic, social and political factors that harmed these countries’ index rankings before popular uprisings in North Africa are rising in significance.

Hope for the future

But the global picture isn’t entirely bleak. Cuba and Georgia tied as the most-improved countries in the index over the past decade. Mauritius became the first African nation to achieve status as Very Stable, while Singapore was the first Asian nation to enter the Sustainable category, joining the likes of New Zealand, Sweden and Luxembourg.

Progress in Africa was reflected by Botswana and the Seychelles joining the Stable category.

Messner says: “Certainly, there is still much conflict, poverty, and inequality in the world. But the data suggests that the majority of countries are incrementally making improvements, providing a more hopeful future for their people.”

Tags
global issuesmapmiddle eastpoliticsprotestsunited stateswar
In this article
global issuesmapmiddle eastpoliticsprotestsunited stateswar
Related
Putin’s war: “The single biggest geopolitical mistake since 1989”
“This is much deeper than just ‘let’s figure out how we can get both sides to get along.’”
▸
15 min
—
with
Ian Bremmer
How resisting conformity can lead to real world progress
Thinking as a group and going along with the loudest voices can feel easy and even natural. But to make real positive change in our world, it’s important to hear all voices and question the perceived majority.
▸
5 min
—
with
Todd Rose
10% of people are dominating social media. What if the other 90% spoke up?
Social media isn’t the majority – it’s the vocal fringe.
▸
with
Todd Rose
The Big Think Interview
Why the world needs cults
Scientology, QAnon, and Heaven’s Gate: why do we seek healing from cults?
▸
with
Jamie Wheal
The Past
Rise of the war machines: What drove the evolution of military technologies?
Historians know how military technologies evolved, but the reasons why remain poorly understood.
Up Next
Hard Science
Why the universe’s ancient galaxies were extra bright
New research based on observational data from the Spitzer telescope provides clues as to how the universe first emerged from its dark age.