Distrust of the media is a growing phenomenon in the U.S., with many Americans feeling that mainstream news media presents biased views and an alarming number saying they’re reluctant to believe what is being reported. 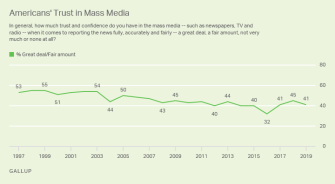 It’s easy to make the argument that media consolidation is to blame for this trend.

When ownership of news sources is concentrated into the hands of just a handful of corporations, the kind of reporting that audiences get to see is limited and all the more likely to be slanted by corporate interests.

Combined with the contraction of traditional local print news in the face of infotainment TV and clickbait-influenced web publishing, journalists are becoming increasingly homogeneous in their views and more susceptible to groupthink.

Up until the 1980s, the federal government worked to prevent media consolidation in partnership with the FCC. But under Reagan, many of the existing regulations were shelved, giving corporations greater leeway in acquiring local news outlets.

Traditional news outlets have been suffering for years with the rise of cable networks and the advent of web publishing. With free content constantly available online, many outlets have given up the ghost and shut down print and broadcast. Newsroom employment has declined dramatically over the past decade, and this has only been exacerbated by the COVID-19 pandemic. 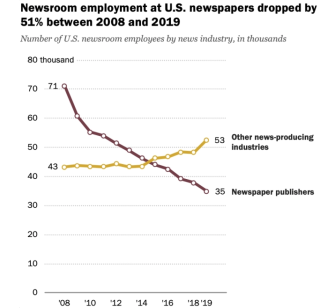 ​The outlets that are left standing are now under corporate ownership and are reliant on social media platforms for distribution. Trading hard-hitting news for click baiting has a direct impact on both the format of the news and the kind of information that is disseminated.

One effect of the contraction of the news industry is that journalists are networking with fewer peers and sources. In one recently published study, “Sharing Knowledge and ‘Microbubbles’: Epistemic Communities and Insularity in US Political Journalism,” researchers from the University of Illinois explore the extent to which groupthink bias is increasingly being built into the content we consume.

The study even goes so far as to measure news media homogeneity using data from journalists’ interactions on social media. Analyzing 680,021 tweets posted by 2,292 accounts belonging to credentialed journalists, the researchers concluded that “beltway insularity,” as they call the phenomenon, can easily be grouped into nine distinct clusters. 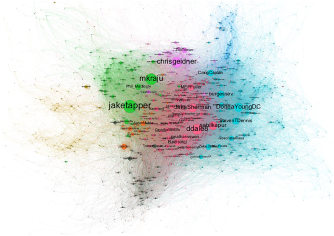 The findings of the study suggest that Washington journalists operate in insular microbubbles that are vulnerable to consensus seeking. If the reporters on the Hill are feeding America copycat news information, we are all at risk of succumbing to groupthink.

Critics have two main concerns with this consensus-reinforcing phenomenon: a less diverse output of storylines and takes on those storylines, and the ease with which unsubstantiated or shoddily substantiated reporting can get picked up by mainstream news outlets.

There’s never been a time in American history when the sources of information were so doubted. Even after Watergate, trust in the media stood at 74 percent. At last count, Gallup found that just 20 percent of American have confidence in print and broadcast journalism, two more percentage points than TV news received in the same poll.

There is a growing concern that news media is biased, that reporters don’t just report but curate and editorialize, and that the money behind the news has an impact on what is reported and how. This suspicion is fodder for conspiracy theorists who vilify the mainstream media and offer alternative facts to what is available. Playing on people’s fears, alternative outlets online are picking up steam and spreading misinformation (and deliberate disinformation).

For example, although many leading news outlets – including The Washington Post, The Independent, The New York Times and even Fox News – independently debunked the “Pizzagate” conspiracy as soon as it began to spread in 2016, media coverage of the story has steadily risen throughout the past year.

Recent examples of conspiracy theories about COVID-19 achieving widespread popularity attest to this trend. Other examples include climate change denial, the QAnon “deep state” conspiracy, and others. Where public trust in news media is lacking, fake news fills the void.

One factor in Americans’ diminishing trust in the news is that there are fewer journalists, especially local journalists, that viewers can turn to as distinct voices. Lack of local coverage and the rise of homogeneous, sensationalist journalism are perpetuating distrust and driving many Americans to look for news elsewhere – and leaving them susceptible to manipulation.

As mentioned earlier, print media has been hit hard, and broadcast journalism is also feeling the pain. With lots of newsroom layoffs and closures, having fewer journalists means exposure to fewer perspectives. This has created a situation where there is less original reporting, with more repurposing of others’ stories and less fact checking, thereby contributing to the spread of misinformation.

“We can all have our own social media account, but when local papers are depleted or in some cases simply don’t exist, people lose a communal voice,” Martin Moore, the author of the study, remarked. “They feel angry, not listened to and more likely to believe malicious rumour.”

Ironically, while the erosion of mainstream media is contributing to the rise of misinformation and alternative news, when outlets attempt to expose fake news, it often backfires, propelling its dissemination. Plenty of news consumers first encounter conspiracies and disinformation on the news, but rather than building trust, 72 percent of Americans believe that traditional outlets are the ones with the agenda.

And who can blame them? The parroting of identical headlines across consolidated newsrooms doesn’t help instill confidence. Take for example this compilation of “local news” talking heads repeating the same script:

All of these reporters are part of the Sinclair Broadcast Group. It’s hard to deny the dangers of corporate consolidation of news media when confronted with damning clips like this, and Sinclair is out for even more control. An attempted acquisition in 2017 would have put Sinclair stations in 72 percent of households with a television, but the deal was struck down by Tribune.

This is a huge amount of influence for one company, or person, to have. In an election year, this is even more pertinent.

Just as more Americans distrust mainstream news, the majority get their facts on social media. This wouldn’t be a problem per se, but the way online news is delivered to consumers perpetuates echo chambers and information bubbles.

Social media deliberately surfaces content to individuals that confirm their views and echo previously viewed or shared content. The algorithms amplify biases and screen out dissenting opinions. Before you know it, other voices are blocked from your feed, leaving you in an echo chamber. This doesn’t just apply to news, but also to targeted ads and campaigns designed for microcommunities with shared attributes.

It has never been easier to convince so many people to believe stories that aren’t necessarily true – lack of trust, consolidation of news outlets, the contraction of journalism, and the pervasiveness of web news is creating isolated information bubbles that many of us now find ourselves stuck in. People naturally want to read news that confirms their beliefs.

When infotainment is commoditized and served up for quick and easy consumption, critical thinking takes a back seat.

With quantified evidence of journalistic groupthink and information bubbles among those who consume political information, is there hope for open dialogue and a variety of perspectives?

Ultimately, yes. However, this won’t likely be coming from the news media. Choosing not to be misled and seeking out a variety of opinions and perspectives is something that each individual will likely have to do on their own, even if it means questioning one’s fundamental beliefs. This entails verifying the information you read, actively engaging with people outside of your comfortable echo chamber, and even changing your mind when confronted with hard evidence.

Finding the facts on your own can be tough, but if we can’t rely on the news to give us the news, there’s no other choice.

People naturally judge fact from fiction in offline social settings, so why is it so hard online?
Health

By exposing people to small doses of misinformation and encouraging them to develop resistance strategies, “prebunking” can fight fake news.
The Present

The media is deliberately pushing your buttons.

“This is much deeper than just ‘let’s figure out how we can get both sides to get along.’”
▸
15 min
—
with
Ian Bremmer
Up Next
The Present

What is environmental racism?

It can mean citizens drinking contaminated groundwater or being schooled in decaying buildings with asbestos problems.