As Americans’ trust in mass media is hovering near all-time lows, it’s especially important for us to sharpen our ability to tell fact from opinion in the news. (At least, that’s one opinion.)

But what’s fact is that many young Americans struggle with this basic skill of critical evaluation, according to the 2018 Programme for International Student Assessment (PISA). The results showed that just 13.5 percent of American 15-year-olds were able to tell facts from opinions in reading tasks involving sentences like:

“Drinking milk is the best way to lose weight.”

Most students couldn’t tell that this is an opinion, even though they were told that it came from the International Dairy Foods Association, a trade group with an obvious interest in promoting the health benefits of milk. A report published by the Organisation for Economic Co-operation and Development, which administers PISA, noted that highly skilled readers are able to tell fact from fiction, in part, “based on implicit cues pertaining to the content or source of the information.”

This caliber of media literacy is especially important today considering that people can get news from a wide array of online sources, the report suggested.

“Reading is no longer mainly about extracting information; it is about constructing knowledge, thinking critically and making well-founded judgements. […] In this “post-truth” climate, quantity seems to be valued more than quality when it comes to information. Assertions that “feel right” but have no basis in fact become accepted as truth.”

American adults struggle with facts and opinions, too

American adults seem to be better at telling fact from opinion, but not by as much as you might think. In 2018, Pew Research Center conducted a study of 5,035 U.S. adults who were asked to read 10 sentences and mark each as opinion or fact. Five of the sentences were fact, five were opinion. The results showed that 26 percent of Americans correctly marked all five factual statements, while 35 percent correctly marked all the opinions.

Here are a few of the statements (you can take the full quiz here):

Interestingly, the Americans who were least able to recognize opinions were more likely to be digitally unsophisticated, politically unaware and mistrustful of the media. 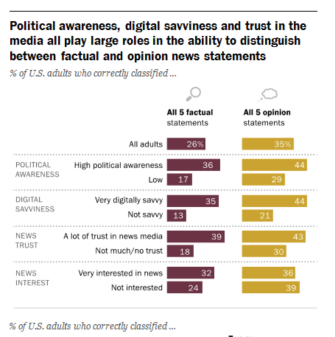 Can you tell which of these 5 statements is opinion?

The Pew quiz offers some relatively clear cut examples of facts and opinions, but it’s not always as easy to distinguish between the two. For example, check out these five excerpts from mainstream news sources, and decide whether each would better be classified as opinion or fact.

When you unintentionally step on a dog’s tail, does it know that it was an accident?
Health

A new study refutes some of the claims recently made about the value of napping.
The Future

Think of a combination of immersive virtual reality, an online role-playing game, and the internet.
Life

Cockatoos teach each other the secrets of dumpster diving

Australian parrots have worked out how to open trash bins, and the trick is spreading across Sydney.
Up Next
Hard Science

Breakthrough in creation of gamma ray lasers that use antimatter

Superpowerful lasers for next-generation technologies are closer to existence.