Scientists are closer to taming the most powerful light in the Universe. A physicist at the University of California has figured out how to make stable positronium atoms, which may lead to the creation of gamma ray lasers.

Gamma rays are the product of electromagnetic radiation that is caused by the radioactive decay of atomic nuclei. Harnessing these extremely bright (and usually very brief) lights, which have the highest photon energy, could lead to next-generation technologies. The highly penetrating gamma rays are shorter in wavelength than x-rays, and can be utilized for spacecraft propulsion, advanced medical imaging and treating cancers.

Creating a gamma ray laser requires manipulating positronium, a hydrogen-like atom that is a mixture of matter and antimatter — in particular, of electrons and their antiparticles known as positrons. The collision of a positron with an electron results in the production of gamma ray photons.

To make gamma-ray laser beams, the positronium atoms need to be in the same quantum state, called a Bose-Einstein condensate. The new study from professor Allen Mills of the UC Riverside Department of Physics and Astronomy, shows that hollow spherical bubbles filled with a positronium atom gas can be kept stable in liquid helium.

“My calculations show that a bubble in liquid helium containing a million atoms of positronium would have a number density six times that of ordinary air and would exist as a matter-antimatter Bose-Einstein condensate,” said Mills.

Mills thinks helium would work as the stabilizing container because at extremely low temperatures, the gas would turn to liquid and actually repel positronium. This results from its negative affinity fo positronium and would cause bubbles to be created, which would be the source of the necessary Bose-Einstein condensates.

Testing these ideas and actually configuring an antimatter beam to produce such bubbles in liquid helium is the next goal for the Positron laboratory at UC Riverside that Mills directs.

“Near term results of our experiments could be the observation of positronium tunneling through a graphene sheet, which is impervious to all ordinary matter atoms, including helium, as well as the formation of a positronium atom laser beam with possible quantum computing applications,” explained the physicist.

Check out the new study in Physical Review A. 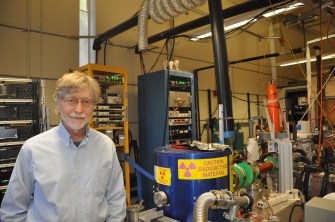 Professor Allen Mills of the UC Riverside Department of Physics and Astronomy.

An international study finds the vast majority of 15-year-olds can’t tell when they’re being manipulated.