Nearly 27 million Americans may have lost their employer-sponsored health insurance amid the COVID-19 pandemic, according to a new Kaiser Family Foundation report.

Between March 1 and May 2, unemployment in the U.S. soared to Depression-era rates, with more than 31 million Americans filing for unemployment benefits. The report estimates that 61 percent of these unemployed Americans had relied on employer-sponsored insurance.

Most of these people will have access to government-subsidized insurance.

“Among people who become uninsured after job loss, we estimate that nearly half (12.7 million) are eligible for Medicaid, and an additional 8.4 million are eligible for marketplace subsidies, as of May 2020,” the report states.

The most traumatic #jobsreport ever:

- Payrolls fell 20.5 million in Apr
> largest decline ever
> more than 2* worst than during GFC

The most traumatic #jobsreport ever:

– Payrolls fell 20.5 million in Apr
> largest decline ever
> more than 2* worst than during GFC

Unemployed Americans may also continue their employer-sponsored coverage through the Consolidated Omnibus Budget Reconciliation Act of 1985 (COBRA), which requires insurance programs to continue covering qualified unemployed Americans for up to 18 months after leaving employment. However, the report states that this “is typically quite expensive since unemployed workers generally have to pay the entire premium – employer premiums average $7,188 for a single person and $20,576 for a family of four – plus an additional 2%.”

Although coverage will be more expensive for some, the vast majority of Americans will not go completely uninsured.

“We project that very few people fall into the coverage gap immediately after job loss (as of May 2020) because wages before job loss plus unemployment benefits (including the temporary $600 per week federal supplement added by Congress) push annual income for many unemployed workers in non-expansion states above the poverty level, making them eligibility for ACA marketplace subsidies for the rest of the calendar year,” the report states. 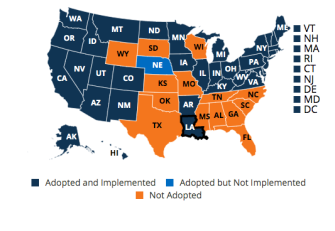 But the report estimates that the coverage gap could grow by 80 percent in January 2021. That’s when unemployment insurance benefits are set to expire in states that did not expand Medicaid coverage under the Affordable Care Act (ACA). Three of those states are Texas, Georgia, and Florida — all of which have suffered especially high job-loss rates amid the pandemic.

The Trump administration and Republican lawmakers in 20 states are currently seeking to strike down the ACA, arguing that the act’s individual mandate provision is unconstitutional. (The individual mandate requires most Americans to maintain a minimum level of health insurance). In June, the Supreme Court is expected to issue a decision on Texas v. United States, the lawsuit challenging the act’s constitutionality.

The court could decide to leave the act as is. It could invalidate just the individual mandate provision. Or it could overturn all or most of the ACA, which would leave millions of Americans without health insurance, assuming there’s no replacement program.

The Kaiser report concludes by highlighting the importance of health care during a pandemic.

“Given the health risks facing all Americans right now, access to health coverage after loss of employment provides important protection against catastrophic health costs and facilitates access to needed care,” the report states. “Unemployment Insurance filings continue to climb each week, and it is likely that people will continue to lose employment and accompanying ESI for some time, though some of them will return to work as social distancing curbs are loosened.”

There are two kinds of suffering. One is pure pain. The other makes life worth living.
▸
6 min
—
with
Paul Bloom
Up Next
Neuropsych