Western culture has a habit of idealizing rural life. The tradition of poets pining for the simple life goes back to the Ancient Greeks. Pastoral art depicts easygoing folk enjoying a bountiful harvest against a sweeping and verdant landscape, Though, the purest encapsulation of this idyllic view has to be the Green Acres theme song.

But Eddie Albert should have listened to Eva Gabor. A report from the Centers for Disease Control and Prevent (CDC) suggests New York really is where you’d rather stay — if you want a better chance at avoiding an otherwise preventable death. 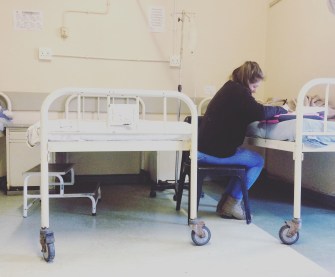 A physiotherapist treats a patient in a rural hospital in South Africa.

In a Morbidity and Mortality Weekly Report, the CDC compared excess deaths between urban and rural communities for the five leading causes of mortality in the United States. Those are, in order, heart disease, cancer, unintentional injuries, chronic lower respiratory diseases (CLRD), and stroke. The report focused on people younger than 80 years old and covered the period from 2010 to 2017.

It found percentages of excess deaths from all five causes to be “consistently higher” in rural counties than urban ones. During the reported period, the urban-rural gap increased for cancer, heart disease, and CLRD. The gap remained steady for stroke and decreased for unintentional injury. However, excess deaths from unintentional injury deaths increased across the United States by 11.2 percent, and rural communities began 2010 with an undesirable head start in that category.

“This new study shows there is a striking gap in health between rural and urban Americans,” former CDC Director Tom Frieden said in a release. “To close this gap, we are working to better understand and address the health threats that put rural Americans at increased risk of early death.”

From the personal to the societal, this urban-death gap has been costly. One-fifth of U.S. citizens, 60 million people, live in rural communities spanning vast stretches of the country. In 2014 alone, tens of thousands of them died from potentially preventable diseases, including approximately 25,000 from heart disease, 19,000 from cancer, 12,000 from unintentional injuries, 11,000 from CLRD, and 4,000 from stroke.

Why health care should start long before you reach the hospital

Looking for relief in medical deserts

For the record, excess deaths are those caused by a disease or condition that occurs more frequently than the regular rate predicted for a given area or population. Because excess deaths stand above and beyond, they are viewed as largely preventable. (For the CDC report, the benchmark was the three states with the lowest rates.)

Salubrious-minded readers will note that four of the five leading causes of mortality are chronic diseases that require ongoing medical attention. Unfortunately, roughly 77 percent of rural communities are labeled medical deserts. This means health care is limited — if it exists at all — and access to it difficult.

Rural counties have a much higher uninsured rate than their urban counterparts. Distance and limited transportation options can make accessing health care difficult or untimely. Even then, country hospitals and trauma centers often lack specialists and advanced equipment. Only 11 percent of physicians chose to practice in rural areas, and as many as 9 percent of these communities have no physicians whatsoever.

Then there are the diseases themselves. At the end of the 19th century, when the urban-rural gap was reversed, disease was a major attributing factor. Communicable maladies such as tuberculosis and diarrheal diseases plagued the densely packed metropolises, killing many. Little wonder they idealized the agrarian life.

Conversely, today’s chronic killers have less to do with environmental contamination and more to do with lifestyle and an aging population. Rural communities report higher rates of obesity and high blood pressure but lower rates of leisure-time activity. They also report cigarette smoking to be more prevalent. Finally, the countryside is demographically much older than urban centers. 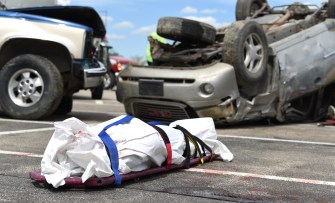 A student performer in a body bag helps teach freshman the dangers of distracted driving. Motor vehicle accidents are the leading cause of unintentional injury deaths in the U.S.

That leaves unintentional injuries. These excess deaths have traditionally been viewed as urban scourges, but they are far more pernicious for rural communities than common knowledge would suggest.

The leading cause of such deaths is motor vehicle accidents. Country motorists are three to ten times more likely to die in a vehicle than their urban peers. One reason for the disparity is simply that country motorists must drive farther and more often. Another is a higher rate of alcohol-impaired driving. And as rurality increases, seat belt use decreases.

Other major causes of unintentional injurious deaths include drug overdoses and firearms.

Metropolitan centers led the nation in poisonings when heroin and cocaine reigned. But as prescription drugs replaced street ones as the leading causes of accidental overdoses, rural communities and the elderly saw their tragic share of the epidemic rise. And as we’ve seen, when such an overdose occurs in a medical desert, access to care is often delayed and that care substandard.

Firearms deaths are also perceived as an urban blight. While it is true that homicides committed by firearms overwhelmingly happen in cities, firearm suicides occur with much more frequency. In the 90s, suicides accounted for more than half of all intentional firearm deaths in the United States, and a disproportionate number of those were in rural communities.

All told, a study published in the Annals of Emergency Medicine found that the risk of injury-related death was about 20 percent lower in U.S. cities than in agricultural counties.

“Perceptions have long existed that cities were innately more dangerous than areas outside of cities, but our study shows this is not the case” Sage R. Myers, study lead author and assistant professor of pediatrics at the Perelman School of Medicine, said in a release. “These findings may lead people who are considering leaving cities for non-urban areas due to safety concerns to re-examine their motivations for moving. And we hope the findings could also lead us to re-evaluate our rural health care system and more appropriately equip it to both prevent and treat the health threats that actually exist.” 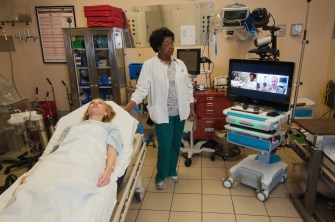 A nurse in a rural hospital discusses her patient’s diagnosis with a doctor in Atlanta, GA, over the hospital’s Electronic Medical Records System.

Do the CDC report and corroborating studies mean rural residents should migrate to the city? Have we entered the era of Rural Flight? Of course not. The whole point of the CDC report is that many, if not most, of these deaths are preventable. Not inevitable.

But to save lives, we need to initiate a comprehensive public health strategy aimed at education, intervention, and prevention in medical deserts.

One final thought: In 1971, the disparity between urban and rural life expectancy was 0.4 years (70.9 versus 70.5). By 2009, that disparity had grown to a full 2 years (78.8 versus 76.8). It’s time we ended our centuries-old obsession with an idealized rural life and start facing the rural realities that are ending American lives.

Being mortal makes life so much sweeter.

A food safety researcher explains another way to know what’s too old to eat.
Up Next
Starts With A Bang

Sure, cosmic inflation has its detractors. But it also has something no alternative possesses: predictions and tests.Perhaps the most compelling part of any remarkable story is its origin: how it all […]