As the three-year-old “movement,” QAnon, makes inroads into the American mainstream, the far-right conspiracy theory—Donald Trump is taking down the “Deep State,” which is in large part comprised of an elite, Satanic cabal of pedophiles—is having real-world impact. Besides damaging abused and traumatized children (the victims it purports to help), there are further troubling theories, such as the LGBT movement being a palate cleanser designed to prepare America to accept pedophilia.

QAnon is also gaining political momentum. To date, 75 congressional candidates have supported QAnon in some capacity; 70 are Republicans. There’s also a GOP super PAC, Disarm the Deep State, run by 8chan founder Jim Watkins. 8chan was a major gathering place for Q devotees. After being shut down, it reemerged as 8kun on a Russian hosting service.

Watkins realized he could monetize QAnon. He’s not the only one. There are over 2,000 QAnon-related tchotchkes for sale on Amazon, including books, posters, mugs, t-shirts, and minted coins. That Q catalog is tame compared to Etsy, where over 6,600 items are for sale, including a number of face masks (for the rebel who isn’t quite rebellious enough to eschew basic science) and a selection of bumper stickers that effectively warn other drivers to stay as far away as possible.

How many of these memento peddlers are really QAnon devotees? Hard to tell. Some people will monetize anything. If you want to trace Q activists turning their platforms into cash cows, you have to root them out one by one.

The Cult of QAnon – Travis View | The Open Mindwww.youtube.com

Perhaps the most Alex Jonesy of the QAnon cult is Jordan Sather, who monetizes his Twitter account with links to his supplement company, which, par for the course with this industry, makes hefty claims without the necessity of pesky clinical trials. Increase your brain function! Improve exercise performance! Detoxify! Enjoy with a hint of stevia!

If Sather’s colloidal silver reminds you too much of huckster-in-chief, David Wolfe, there’s an array of shungite (98 percent carbon) pendants that “provide powerful protection against EMFs” (electromagnetic fields). If you’re already energetically protected, check out Sather’s t-shirt shop, which features a selection of Q-themed swag. If you’d rather throw money at him for pro-Trump propaganda, there’s a Patreon link and a tip jar as well.

Kim Cohen doesn’t record meandering videos about UFOs. Instead, she uses her Instagram platform to showcase the fashion brands that sponsor her as she “jetsets” around the world. Scroll through her stories, however, and you’ll find her Q Shop, where she hawks mugs, iPhone covers, and hoodies—an ironic optic, given her views on Black Lives Matter: “It’s almost been two weeks, I believe. Yeah. And people are still f***ing doing s**t in the streets. Are you kidding me?”

Transformational life coach Bernhard Guenther writes exceptionally long social media posts and essays littered with GOP talking points on QAnon. These posts feed back to his website, where he offers private coaching sessions, webinars, and courses on occult forces. This makes sense, given QAnon “followers speculate that Q is a time-traveling shape shifter, an ethereal non-corporeal being who obtains human form only to trick witless NSA officials into divulging sensitive secrets.”

Two young Californians recently launched Child Abuse Resistance Education in the heart of anti-mask fervor, Orange County. While not specifically QAnon-related, they’re asking for donations on PayPal despite listing no actual projects on their website. The Q crossover happens in posts like this, where they accuse the Clintons, Chrissy Teigen, and Ellen DeGeneres of being pedophiles. 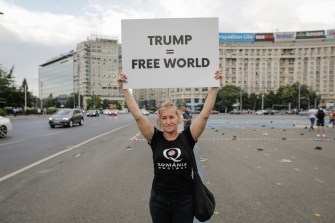 The Save Our Children Initiative was founded by a “traveling beauty slayer” and an apparel marketer. Their website falsely claims that 800,000 children go missing in the United States every year. As foster youth expert Regan Williams told me last week, the number is closer to 25,000-29,000, and 94 percent are recovered within four to six weeks.

Their site also claims 8,000 children go missing each year, on the same exact page. This group is selling t-shirts and hats, as well as accepting donations, although how those donations are used is unknown. The site claims your money will go “to a charitable organization recipient and towards outreach programs for this cause.”

As I wrote about previously, ad revenue from targeting anti-vaxxers (and ads directly purchased by anti-vaxx organizations) generate upwards of $1 billion for social media platforms. Similar motives are driving ad revenue for QAnon-related merchandise, while QAnon video producers are monetizing YouTube by running ads by Nike and Apple during their shows.

If you want to escape the negativity, head to Kazakhstan.
Up Next
Starts With A Bang

The rings are raining down onto the planet, and disappearing surprisingly fast.4.5 billion years ago, our Solar System first formed.Protoplanetary disks, which all solar systems are thought to form with, […]