Quantum computing has existed in theory since the 1980’s. It’s slowly making its way into fact, the latest of which can be seen in a paper published in Nature called, “Deterministic teleportation of a quantum gate between two logical qubits.”

To ensure that we’re all familiar with a few basic terms: in electronics, a ‘logic gate’ is something that takes in one or more than one binary inputs and produces a single binary output. To put it in reductive terms: if you produce information that goes into a chip in your computer as a ‘0,’ the logic gate is what sends it out the other side as a ‘1.’

A quantum gate means that the ‘1’ in question here can — roughly speaking — go back through the gate and become a ‘0’ once again. But that’s not quite the whole of it.

A qubit is a single unit of quantum information. To continue with our simple analogy: you don’t have to think about computers producing a string of information that is either a zero or a one. A quantum computer can do both, simultaneously. But that can only happen if you build a functional quantum gate.

That’s why the results of the study from the folks at The Yale Quantum Institute saying that they were able to create a quantum gate with a “process fidelity” of 79% is so striking. It could very well spell the beginning of the pathway towards realistic quantum computing.

The team went about doing this through using a superconducting microwave cavity to create a data qubit — that is, they used a device that operates a bit like a organ pipe or a music box but for microwave frequencies. They paired that data qubit with a transmon — that is, a superconducting qubit that isn’t as sensitive to quantum noise as it otherwise could be, which is a good thing, because noise can destroy information stored in a quantum state. The two are then connected through a process called a ‘quantum bus.’ 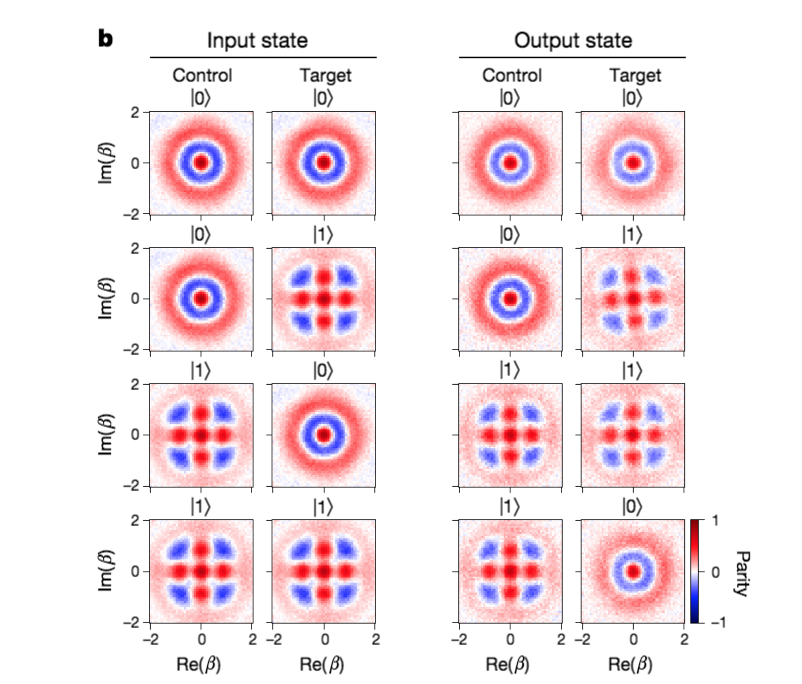 That process translates into a quantum property being able to be sent from one location to the other without any interaction between the two through something called a teleported CNOT gate, which is the ‘official’ name for a quantum gate. Single qubits made the leap from one side of the gate to the other with a high degree of accuracy.

Above: encoded qubits and ‘CNOT Truth table,’ i.e., the read-out.

The team then entangled these bits of information as a way of further proving that they were literally transporting the qubit from one place to somewhere else. They then analyzed the space between the quantum points to determine that something that doesn’t follow the classical definition of physics occurred.

They conclude by noting that “… the teleported gate … uses relatively modest elements, all of which are part of the standard toolbox for quantum computation in general. Therefore … progress to improve any of the elements will directly increase gate performance.”

In other words: they did something simple and did it well. And that the only forward here is up. And down. At the same time.

Tags
computerstechnology
In this article
computerstechnology
Related
Why geniuses hunt demons for sport
Jimena Canales shares the “demons” that shaped computer science.
▸
6 min
—
with
Jimena Canales
The Future
5 of the most amazing cracked codes in modern history
From 260-year-old ciphers to the most recent Zodiac Killer solution, these unbreakable codes just needed time.
Videos
NASA astronaut explains humanity’s trajectory to Mars
The first human that isn’t an Earthling could be in our lifetime.
▸
5 min
—
with
Robert Curbeam
The Well
Michio Kaku: 3 mind-blowing predictions about the future
What lies in store for humanity? Theoretical physicist Michio Kaku explains how different life will be for your descendants—and maybe your future self, if the timing works out.
▸
with
Michio Kaku
The Well
Time travel is possible. Can we go back?
Theoretical physicist Brian Greene explores the potential particles of time and why we could, in theory, travel forward in time but not back.
▸
with
Brian Greene
Up Next
Mind & Brain
Why Japan’s hikikomori isolate themselves from others for years
These modern-day hermits can sometimes spend decades without ever leaving their apartments.