The “father of recycling” is a man from Woodbury, New Jersey, named Donald Sanderson. In the 1970s, his local landfill was nearing capacity and costing locals thousands of dollars in fees. Sanderson had an idea, made some calls and found that some of that trash consisted of materials that could be sold instead of dumped. At his urging, Woodbury instituted the first U.S. mandatory curbside recycling program, with separate bins for glass, metal, and paper. (Plastic trash remained simply trash.) In not too long, it became clear that the project was bringing in revenue for the town. Other municipalities around the country soon followed suit.

At this scale, things worked well enough, but the explosion of plastic packaging that began in the 1980s and continues today introduced a new problem that wasn’t so simple to solve: Plastic. And there was lots of it. According to Financial Times, the world has produced some “6.3 billion tonnes of plastic waste since the 1950s.” [our emphasis]

Fortunately, China’s manufacturing and export sectors were booming, and that provided a solution. Cargo ships full of Chinese products were arriving at U.S ports and returning home empty, a perfect means of transporting recycled plastic back home for use in the manufacture of even more goods. Great timing for the growing recycling industry.

On the other hand, for consumers, separating out the various recyclables required some effort and time, as well as household space for multiple bins. To bring more citizens into the process, towns began offering “single-stream” recycling. With single-stream, one bin holds all recyclables, and the municipalities or the recyclers with whom they contract are responsible for sorting out the separate materials. Shifting that burden away made recycling less of a hassle for individuals. 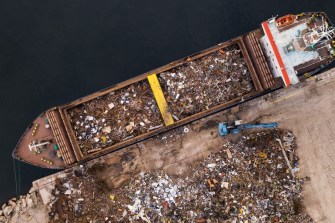 The history of recycling

While the tactic worked at getting people to recycle, the single-stream bins have become something of a disaster. People dump pretty much anything into their recycling bins: food-contaminated stuff and other non-reusable items, some of which clogs and breaks recyclers’ sorting apparatus. There are tales of toilet bowls, bowling balls, and, yes, even kitchen sinks being found in our blue bins. The bottom line is that facilities receiving single-stream recycling confront a massive, expensive, and sometimes impossible job of sorting everything out. These days, they find themselves confronted with tons and tons of irrevocably contaminated materials that can’t be readily sold.

Nonetheless, China remained willing to take this stuff off the hands of U.S recyclers and municipalities. (Still, even at the best of times, only 10 percent of our plastics were actually getting recycled.) China’s Operation Green Fence in 2013 served notice that they were getting tired of dealing with all the dirty materials, but the country’s patience ended altogether in July 2017, when the Chinese government announced Operation National Sword. 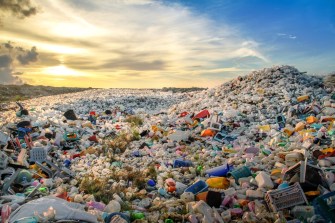 China now produces all of the recycled materials it needs domestically. Operation National Sword lays down the law on importing contaminated materials, resulting in a list of 24 types of scrap that China will no longer accept. (Chinese-produced recyclables are now seen as resources, while the same items arriving from overseas are consideredyang laji, which translates to “foreign trash.”) As Zoe Heller of the California state recycling agency CalRecycle says, China’s new policy “challenges us to admit that recycling isn’t free.”

China’s exit from the international recycling stage had the immediate result of prompting other Southeast Asian countries to come forward to take its place, but that trend is already reversing. Malaysia and Thailand have quickly became inundated, and now India has announced they’re done with taking plastics.

Particularly hard-hit are Japan — “Now all this trash is building up in Japan and there’s nothing to do with it; the incinerators are working at full capacity,” says Eric Kawabata of U.S.-based company TerraCycle — and Western countries. The G7 nations account for more that 2/3 of exported paper scrap and the majority of plastic.

Left holding the bag in the U.S. are the many local governments who’ve enjoyed an easy source of income and now face the prospect of paying for recyclables’ removal. Where plastics once sold for in the neighborhood of $300 a ton, municipalities are now facing having to pay to get rid of it. The upshot is that increased landfilling — the problem that led to recycling in the first place — is once again on the rise, and local authorities are now limiting the materials they’ll accept to those they can still sell. Voxspoke to environmental expert Kate O’Neill, of UC Berkeley, who succinctly summarizes the current situation, “Oh, the shit’s hitting the fan.” 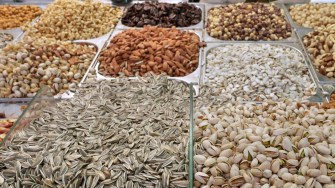 How do we fix this?

Really, this is story about our wasteful habits. If the most difficult material to deal with is plastic, then the thing that most makes recycling not work after 40 years is single-use plastic. It’s a habit we’ve decisively not broken.

While some plastic could be eliminated from packaging and replaced with, say, paper, the real solution lies in adopting more of a “zero waste” mindset. Recology’s Robert Reed says, “One of the most important lessons we’ve learnt from zero waste is that a lot of the solutions are in the past. Just ask yourself, what was it like when your grandparents were alive? They didn’t have single-use coffee cups, didn’t have water bottles. And yet they survived — thrived, in fact.”

While recycling is clearly a sensible idea in broad strokes, maybe China’s done us a favor: It’s as if we’re suddenly waking from a lovely dream in which all the waste we produce can simply be sold and reused.

It’s not a panacea. There’s simply no substitute for more seriously working to reduce our waste stream.

U.S. states vary radically in terms of electricity generation. Vermont is the cleanest, while Delaware is the dirtiest.
Neuropsych

To preserve biodiversity and ecosystems, protected areas should be connected into a gigantic World Park.
The Present

The Seychelles magpie-robin is up for sale – yes, for sale – as a digital nature collectible.
Up Next
Hard Science

The Russian-built FEDOR was launched on a mission to help ISS astronauts.