Conflict, violence, persecution and human rights violations led to a record high of 70.8 million people being displaced by the end of 2018.

The latest data from the UN Refugee Agency represents an increase of 2.3 million people on the previous year, twice as many as two decades ago – and is roughly the same as the population of Thailand.

But the actual number could be higher because the data only partially reflects the current political and economic crisis in Venezuela, from which around four million people have fled, according to the UNHCR.

Here are the key facts about the world’s displaced population from the UNHCR’s Global Trends – Forced Displacement in 2018 report. 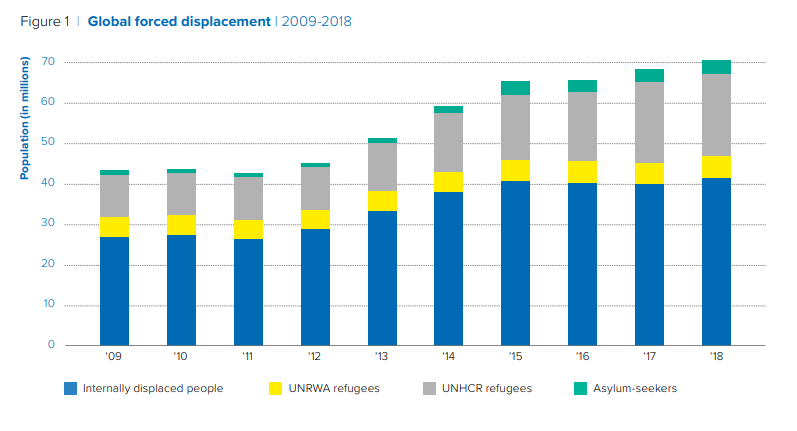 1. There were more than 13 million newly displaced people in 2018

While some displaced people did manage to return to their country of origin, there were 13.6 million newly displaced persons in 2018 – that means 37,000 persons were forced to flee their homes each day of the year due to war or persecution.

A total of 3.5 million asylum seekers – those under international protection, but not yet granted refugee status – were awaiting a decision about their applications, 1.7 million of which were new applicants.

More people sought asylum in the US than any other country, followed by Peru, Germany, France and Turkey.

2. The majority of refugees come from just five countries

More than two-thirds of all refugees originate from just five countries: Syria, Afghanistan, South Sudan, Myanmar and Somalia. In each of these countries, war and unrest account for the high numbers of displaced people. 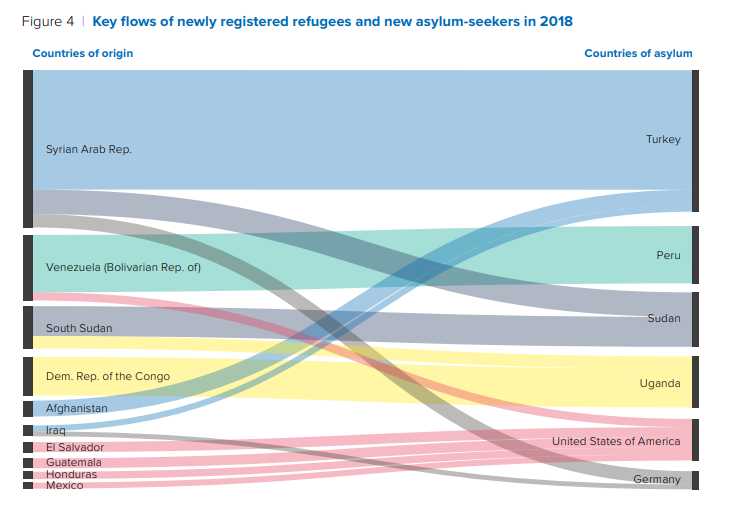 Syrians make up the largest single group of displaced people, with 13 million living in displacement, including 6,654,000 refugees, 6,184,000 internally displaced persons and 140,000 asylum seekers.

Syria has been the main country of origin of refugees for more than five years.

3. Most refugees seek refuge in the country next door

Almost four out of five refugees around the world sought refuge in a country neighbouring their homeland.

Since hostilities began in Syria in 2011, refugees have largely fled across the border into Turkey, which currently hosts the world’s largest refugee population, at 3.7 million. As well as the 3.6 million exodus from Syria, Turkey has taken in smaller numbers of refugees from Iraq, Iran and Afghanistan.

While total global refugees increased during 2018, fewer returned to their homeland than in the previous year. 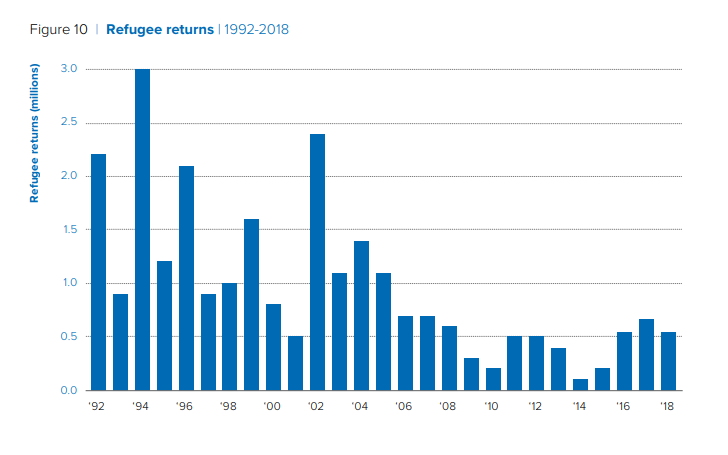 Although the situation in Syria is far from stable, more than 210,000 refugees did return home, mostly from Turkey.

5. Almost half of the world’s refugees are children

Children under the age of 18 made up about half of the global refugee population in 2018, including many that were unaccompanied or separated from their parents – and, as such, at risk from abuse and exploitation.

However, many countries do not report, or misreport, the numbers of this most vulnerable refugee group, underestimating the actual figures.

Tags
global issuesimmigrationmiddle eastrefugeessouth americawar
In this article
global issuesimmigrationmiddle eastrefugeessouth americawar
Related
The Past
Rise of the war machines: What drove the evolution of military technologies?
Historians know how military technologies evolved, but the reasons why remain poorly understood.
The Present
Why doesn’t the U.S. win wars anymore?
Paradoxically, we lose wars because the world is peaceful and the U.S. is powerful.
The Present
Controversy: was the Caribbean invaded by cannibals?
A 2020 study has revived a longstanding controversy over Christopher Columbus’ claims of marauding cannibals in the Caribbean.
The Present
Study: unintended consequences of affirmative action
A program in Brazil both helped and harmed. What can we learn from it?
The Present
Why the U.S. is trapped in “endless war”
Instead of just Afghanistan, the U.S. military ought to withdraw from the entire Middle East and much of the rest of the world.
Up Next
The Present
Bernie Sanders’ student debt plan bails out the rich
Bernie Sanders reveals an even bigger plan than Elizabeth Warren, but does it go too far?