Dressed in an all-white suit with a white tie, attorney Joe Brandon, Jr., paced back and forth in the county courthouse in Rutherford County, Tennessee, in 2010, peppering witnesses with incendiary questions. During some of the proceedings, Brandon wore brightly colored ties with checkered shirts and checkered suits. In all of his looks, he channeled the brash comedians from the 1950s and 1960s—except that Brandon’s stage was an American courtroom, and in this courtroom, Islam was on trial.

“Isn’t it true that in the Qur’an, Mohammad had a six-year-old wife that he had sex with … Is that your idea of what a religion is?”

“Sharia law includes instruction on how to beat your wife … How is Sharia law going to affect our society, our jobs and our freedoms?”

“How can something be called a religion that promotes the abuse of women?”

“Do you believe in having sex with children?”

Brandon represented four residents who were challenging the county’s issuance of a construction permit to the Islamic Center of Murfreesboro to build a mosque. The residents’ concern was that the county had treated mosques like any other house of worship, and Islam like any other religion, when in fact, in their view, Islam was not a religion at all. They believed Islam was actually a dangerous political ideology that posed security threats to the local community and to America. This, precisely, is what Brandon argued in court. 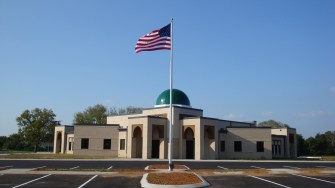 The Islamic Center of Murfreesboro in Tennessee.

The “circus,” as a county attorney called it, went on for six days. It troubled me then, and continues to trouble me today, and not just because I am an American Muslim. It troubles me because I value and seek to protect all Americans’ religious liberty. I see, perhaps more clearly than many others, that the claim used against Islam in Murfreesboro can be used against followers of any other religion, too.

In fact, historically, it has been used against other groups. In 19th-century America, nativists resented the new influx of Catholic immigrants. The anti-Catholic animosity was so strong that, on more than one occasion, it resulted in mass violence. As with anti-Muslim claims today, American nativists claimed that the Catholic Church acted as a foreign entity with monarchical tendencies, portraying the Catholic Church as incompatible with American democracy and calling into question the loyalty of Catholic citizens. Even as recently as John F. Kennedy’s run for the presidency in 1960, prominent Americans claimed that the Vatican would exert nefarious political influence if a Kennedy, a Catholic, won the White House. 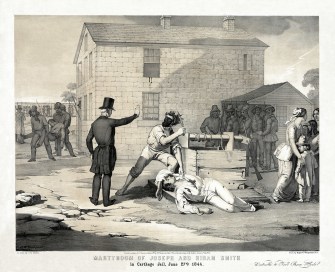 Joseph Smith, the founder of Mormonism, and his brother, Hyrum Smith, were killed by a mob in Carthage, Illinois, on June 27, 1844.

None of this is new. A few decades before Kennedy’s campaign, Henry Ford distributed the tract, “The Protocols of the Elders of Zion,” an anti-Semitic fabrication that falsely claimed to detail meetings of Jewish elders seeking to control the press and the world economies. Mormons, or members of the Church of Jesus Christ of the Latter-day Saints, have also faced immense persecution in the United States. In 1838, Missouri governor Lilburn W. Boggs issued an expulsion and extermination order directing Missourians to treat Mormons as “enemies” who “must be exterminated or driven from the State if necessary.” In 1883, Mormons faced what many have called a precursor to President Trump’s travel ban. That year, President Grover Cleveland asked Congress to find a way to “prevent the importation of Mormons into the country.” And in 1903, after the election of US Senator and Mormon apostle Reed Smoot, the U.S. Senate subjected Smoot’s faith to a four-year proceeding because it feared Smoot’s role as an apostle in the Mormon Church made him loyal to the Church over U.S. laws.

In each of these cases, the marginalized religious community has experienced what Yale historian Timothy Snyder calls “denationalization.” This, he says, means, “You take people who are your neighbors and you define them not primarily as your neighbors and fellow citizens but primarily with some larger world community, all of whose members hold the same views.” Today, Muslims are the ones denationalized, in some of our laws and in our public perception of Muslims’ rights. But while Muslims are the latest victims, the attacks on their rights impacts all Americans.

Again, history bears out this point. When hostility against a specific group results in particular laws targeting them, those laws may later impact a much broader group. For example, the denationalization of Catholics in the 19th century culminated in the formation of a political party, the Know-Nothing Party, which sought a type of political purity and advocated for laws that banned public aid to parochial schools and prohibited public school teachers from wearing religious garb. The anti-garb statutes targeted Catholic nuns, and both sets of laws sought to limit Catholic influence over American public life. While these laws are rooted in anti-Catholic animus, today they impact people of every religion. Pennsylvania uses the religious garb ban against Sikh teachers in turbans and Muslim teachers in headscarves. And the ban on aid to parochial schools is used by many states against religious schools of all types.

“I see, perhaps more clearly than many others, that the claim used against Islam in Murfreesboro can be used against followers of any other religion, too.”

In today’s context, if we cede power to the government to regulate Muslim religious practice more heavily than it regulates other religious practices, we create a precedent that will ultimately limit all Americans’ liberty. For example, if courts and legislatures are empowered to accept Brandon’s claim that Islam is not a religion and Muslims do not have religious freedom, they can accept those claims about every other religious group the majority may fear or hate. If, as some prominent individuals want them to, courts start to parse Islamic doctrine to decide which parts are acceptable or likeable and which aren’t, they open the door to courts parsing the beliefs of every other religious group, too.

This is not to say that all religious acts are protected—those that pose serious risks to life, safety, national security, and other government interests the law calls “compelling,” can be legitimately restricted. But what Brandon sought when he tried stopping the construction of a mosque, what 19th century nativists sought when they wanted to keep nuns out of public schools, and what the U.S. Senate sought when it grilled Senator Smoot, is much broader. It has nothing to do with pragmatism and the protection of compelling interests, and everything to do with a fear and hatred that is capable of subsuming all Americans’ rights.

Psychologists are finding that moral code violations can leave an enduring mark — and may require new types of therapy.
Up Next
Hard Science

Scientists from John Hopkins find a material for quantum computing.