In a story rich with metaphors, a Russian-made dancing robot named “Boris”, which was trotted out as a high-tech advancement, has been unmasked as being just a man in a suit.

While reporting on the Proyektoria technology forum in Yaroslavl, organized each year for the “future intellectual leaders of Russia”, the state-owned channel Russia-24 promoted a “most modern” android as a tech breakthrough that could talk, walk and even dance.

But what they saw did not sit well with a number of Russian journalists who raised questions, not believing it was really a robot. One thing that stood out for many was the lack of external sensors on the “robot” and the fact that it made many “unnecessary movements” during dancing.

The truth came to light when a photograph showing an actor being outfitted with the suit was published by MBKh Media. This news agency was founded by Mikhail Khodorkovsky, Putin’s renowned opponent. 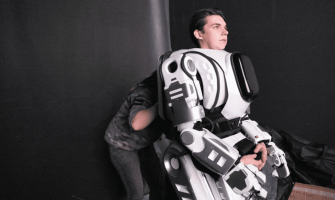 “Boris” turned out to be a 250,000 rouble (~$3740) “Alyosha the Robot” costume, featuring a microphone and a tablet-like display. On its site, Show Robots, the company behind the suit, claims its product creates the “near total illusion that before you stands a real robot”.

Whether this was truly a case of the state telling its citizens to not believe their eyes or a journalistic mistake remains to be seen, but the news report certainly portrays the dancing robot as an achievement. “Boris” is shown to say in a robotic voice “I know mathematics well but I also want to learn to draw.” After that he gets the crowd to dance to the Little Big song Skibidi.

Here’s the original news report from Russia-24 on the amazing “robot” Boris.

“This is much deeper than just ‘let’s figure out how we can get both sides to get along.’”
▸
15 min
—
with
Ian Bremmer
The Well

What lies in store for humanity? Theoretical physicist Michio Kaku explains how different life will be for your descendants—and maybe your future self, if the timing works out.
▸
with
Michio Kaku

Thinking as a group and going along with the loudest voices can feel easy and even natural. But to make real positive change in our world, it’s important to hear all voices and question the perceived majority.
▸
5 min
—
with
Todd Rose
Up Next
Think Again Podcasts

Helen Riess, M.D. – Empathy in the brain and the world

Empathy makes us human. Humans make structures that rob us of empathy when we need it most. Helen Riess is trying to reverse that trend.