Imperial China developed the world’s first standardized tests. During the country’s Tang dynasty, bureaucratic hopefuls took the jinshi exams to test their knowledge. This revolutionary education system became one of the first in the world to create a gentry class based on scholarly achievement, not heredity, leveling the social structure and creating unprecedent social mobility for the time.

Today, standardized tests continue to level the social playing field. Standardized testing provides a consistent measure for academic success, offer high-achieving students a way to prove themselves that is unbound by their social circumstances, and create an objective appraisal by which all schools can be compared.

Despite these potential benefits, many experts argue that education systems over rely on standardized testing for assessment. Such reliance can lead teachers to “teach to the test” and provide unfair advantages to communities that can afford better test prep. Standardized tests may also force students into superficial thinking — that is, simply copying answers compared with active, critical engagement of knowledge. And nonstop testing can overwhelm students with undue stress.

Which system has benefited its students more? Let’s find out. 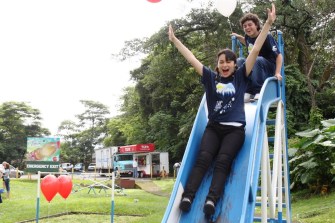 Popular belief states that Finland doesn’t use standardized tests. That’s not strictly true, so this section will be a tad longer than anticipated.

Finland’s education system has one major standardized test, the national matriculation examination. This test is taken by students at the end of their general upper secondary education and consists of four exams. Students must take a mother tongue language exam. They then select from the following subjects for their next three exams: mathematics, a foreign language, the second national language, and a general studies subject such as humanities or science.

General education students are required to complete the matriculation exam to secure their certificate, along with competition of their upper-secondary coursework. Finnish universities and universities of applied science then use the exam scores as part of their selection criteria. The universities may require other tests as part of their assessment, but this is on a school-by-school basis.

And that’s about it. Finland’s education system does not asses student learning in basic education with standardized testing. Instead, teachers receive general assessment guidelines and assess the students themselves. The Finnish system also encourages students to develop self-assessment skills and develop their own benchmarks for progress.

In lieu of the test, Finland’s goal is “to support pupils’ growth toward humanity and ethically responsible membership of society and to provide them with the knowledge and skills needed in life.”

With that said, Finland does utilize a yearly test to assess school learning outcomes. These tests focus on either mathematics or the mother tongue and literature. Additional subjects like art and multiculturalism are also added depending on the ministry’s objectives.

This may sound like standardized testing by another name, but there are some key differences. First, the tests are sample-based, not comprehensive. Second, the scores aren’t used to assess the student’s but the school, lessening the pressure on the participants. Finally, a school’s score is not tied to funding or a country-wide ranking system. They are provided to the school administrators for evaluation and development. 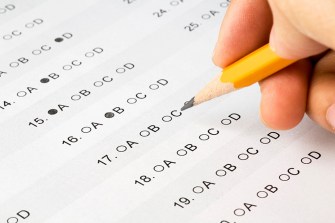 A student fills out a standardized test in the classic multiple-choice format. Image source:
Photo: Alberto G via Flickr

Standardized tests in the U.S.

​Summarizing any facet of the United States’ education system is a trying task. That’s because each state administrates its own education system through state-run departments but must follow federal mandates yet have broad autonomy as to how meet those policies and how to correct course if not up to standards.

It’s like trying to fashion a national league for a sport with 50 official rule books. And the District of Columbia. And U.S. territories.

Even discussing something like the Common Core State Standards, an academic standards initiative designed to set standards for all U.S. students in math and language comprehension, results in long-winded conversations filled with foot notes and run-on sentences. Some states have adopted the standards, some have chosen not to, while others have implemented its policies piecemeal.

And Common Core is just one example of why summarizing any aspect of the U.S. education system will, at best, result in caricature. Still, we’ll do our best.

How the U.S. handles standardized tests was one of those mandates. No Child Left Behind emphasized annual standard tests for students from the third to eighth grade and again in their junior year. Since standardized tests are, well, standard, the goal was to judge the educational achievement of public schools on a level playing field. Each state had to administer the test to receive federal funding, though funding was not tied to a set standard.

The ESSA keep the emphasis on standardized testing, but gave each state “the sole discretion to develop and adopt its own challenging State academic standards, provided they meet the relevant statutory and regulatory requirements.” The U.S. Department of Education, in turn, can provide feedback to states on their assessment system. Since the states have discretion, these tests will vary though most of them focus on mathematics and English language.

In addition to state tests, the U.S. also uses standardized tests for college admissions. These include the SAT and ACT, but some states implement their own. Texas has the Texas Higher Education Assessment test (THEA), and Florida has the Postsecondary Education Readiness Test (PERT). 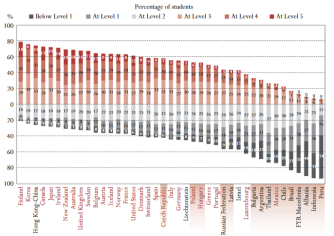 A graph showing the variation of student learning among OECD countries in the first PISA survey.

Is the Finnish education system superior?

It’s difficult to say; however, it seems clear that Finland’s system works better for Finland than the U.S.’s works for the U.S.

The results of the Program for International Student Assessment (PISA), a worldwide survey by the Organization for Economic Co-operation and Development (OECD), seem to bear this out. In 2000, the first PISA ranked Finland number one in education among participating OECD countries.

Since then, Finland has remained a top-performer in the triennial survey. Though it has slipped behind Singapore and Hong Kong, in the 2015 PISA survey, it continued to achieve better than OECD average in science, reading, and mathematics.

“When the sole purpose of education has become the exam, when the test is the be all end all of schooling, then something important has ended in our education system,” said Tristram Hunt, former U.K. Shadow Education Minister, said at a debate on standardized tests. “Rigor matters, but the tyranny of the testing hall is not providing the knowledge, skills, social mobility, or fulfillment, dare I say even the happiness, our education system deserves. And as a result, we are failing to educate, to lead, to mold, and to bring out the best in our young people.”

As for the United States, it remains a midweight contender. In the 2015 PISA survey, out of 35 OECD members, the U.S. ranked around average in science and reading and below average in math. While many facets of any country’s education system affect its success, these results show that constant standardized tests are not improving the U.S.’s academic prowess.

With that said, standardized tests may be living up to one of their promises: creating a more level playing field.

“Alternative methods of assessment are bias [i.e., compared to tests],” Daisy Christodoulou, head of assessment at Ark, countered at the same debate. “They are systematically bias against some of the most disadvantaged peoples in our society, and they also systematically reinforce common stereotypes.”

PISA’s findings suggest Finland’s reliance on teacher assessments could be harming particular groups within its student body. While the country performs well academically, its equity rating lags. In 2015, the country scored below the OECD average for equity among boys and girls, as well as for immigrant students. The United States, on the other hand, performed around the average for equity among boys and girls, and better than the average for immigrant students.

In the end, Finland and the United States are distinct countries socially, culturally, and demographically. Finland has a population of 5.5 million, while New York City alone is home to 8.6 million souls. And the entire country is roughly 30,000 square miles smaller than California. It many ways, comparing the two education systems is comparing apples to lingonberries. Add to this the fact that a fair, accurate, and unbiased assessment of something as complex as learning is no easy task.

However, Finland’s successes lead one to the conclusion that the U.S. should adopt some of that country’s pedagogical methods — namely, not leaning so hard on the standardized test. Then again, Finland may want to consider a few additional tests if it truly wants to create an equal playing field for all its citizens.

Symbolic gestures often speak to our psyche in ways no rational action could ever speak to our intellect.
Up Next
Life

Are these two laws universal throughout nature?