By most accounts, the robots are coming for human jobs. Predictions vary when exactly that reality will be upon us, but it seems clear that within the next couple of decades, machines could be performing up to 50% of all jobs currently done by humans. That sounds quite depressing (if you’re a Homo sapiens) but how badly do we really feel about it? A somewhat surprising new study reveals that most people would rather their job was taken over by robots rather than humans.

Of course, chances are you would rather not lose your job at all. But if it had to be so, losing it to a robot won’t be quite as disappointing, found a team of psychologists led by Armin Granulo from the Technical University of Munich in Germany.

Another fascinating insight of the study showed that people would rather have a human and not a robot take over the job of a colleague. Of 300 subjects asked, 62% wanted a human to take the place of a leaving staff member.

When the same people were asked if it was their job that would be gone, only 37% would have had a human to take their position. That means 63% voted for the robots.

A follow-up study of 251 participants had the scientists asking how intense were negative emotions like anger or sadness in relation to colleagues being replaced by human or robot staff. The subjects were more upset when they thought about other people losing jobs to robots than if it was their own. 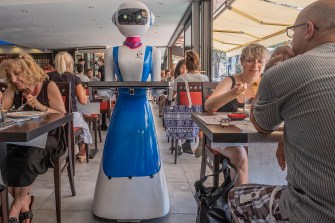 Why such a reaction? People generally find robots not that threatening to their identities. It’s worse for your self-esteem if another human takes your job because it means you are somehow less valuable. A robot, on the other hand, is not the same kind of competition, according to Granulo.

We probably have come to expect robots to be better at everything eventually. After, we are the ones creating them just for such goals.

In another interesting survey, Granulo’s team asked 296 workers in the manufacturing what they thought about the future of their work. A third expect to be replaced by tech soon, but still would rather it was robots then humans doing it.

You can check out the new paper, which besides Granulo, also included Christoph Fuchs and Stefano Puntoni, published in Nature Human Behaviour.

“If there’s a book that you want to read, but it hasn’t been written yet, then you must write it.” — Toni Morrison