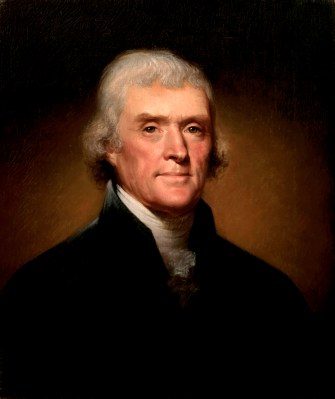 Digitally restored vector painting of President Thomas Jefferson. Thomas Jefferson was the third President of the United States of America, the principal author of the Declaration of Independence, and one of the most influential Founding Fathers.

“I never considered a difference of opinion…as a cause for withdrawing from a friend.”

Political division is nothing new. Throughout American history there have been numerous flare ups in which the political arena was more than just tense but incendiary. In a letter addressed to William Hamilton in 1800, Thomas Jefferson once lamented about how an emotional fervor had swept over the populace in regards to a certain political issue at the time. It disturbed him greatly to see how these political issues seemed to seep into every area of life and even affect people’s interpersonal relationships. At one point in the letter he states:

“I never considered a difference of opinion in politics, in religion, in philosophy, as cause for withdrawing from a friend.”

Today, we Americans find ourselves in a similar situation, with our political environment even more splintered due to a number of factors. The advent of mass digital media, siloed identity-driven political groups, and a societal lack of understanding of basic discursive fundamentals all contribute to the problem.

Civil discourse has fallen to an all time low.

The question that the American populace needs to ask itself now is: how do we fix it?

Preserving free speech is a matter of learning about discourse

In a 2017 Free Speech and Tolerance Survey by Cato, it was found that 71% of Americans believe that political correctness had silenced important discussions necessary to our society. Many have pointed to draconian university policies regarding political correctness as a contributing factor to this phenomenon.

It’s a great irony that, colleges, once true bastions of free-speech, counterculture and progressiveness, have now devolved into reactionary tribal politics.

Many years ago, one could count on the fact that universities would be the first places where you could espouse and debate any controversial idea without consequence. The decline of staple subjects that deal with the wisdom of the ancients, historical reference points, and civic discourse could be to blame for this exaggerated partisanship boiling on campuses.

Young people seeking an education are given a disservice when fed biased ideology, even if such ideology is presented with the best of intentions. Politics are but one small sliver for society and the human condition at large. Universities would do well to instead teach the principles of healthy discourse and engagement across the ideological spectrum.

The fundamentals of logic, debate and the rich artistic heritage of western civilization need to be the central focus of an education. They help to create a well-rounded citizen that can deal with controversial political issues.

It has been found that in the abstract, college students generally support and endorse the first amendment, but there’s a catch when it comes to actually practicing it. This was explored in a Gallup survey titled: Free Expression on Campus: What college students think about First amendment issues.

In their findings the authors state:

“The vast majority say free speech is important to democracy and favor an open learning environment that promotes the airing of a wide variety of ideas. However, the actions of some students in recent years — from milder actions such as claiming to be threatened by messages written in chalk promoting Trump’s candidacy to the most extreme acts of engaging in violence to stop attempted speeches — raise issues of just how committed college students are to upholding First Amendment ideals. Most college students do not condone more aggressive actions to squelch speech, like violence and shouting down speakers, although there are some who do. However, students do support many policies or actions that place limits on speech, including free speech zones, speech codes and campus prohibitions on hate speech, suggesting that their commitment to free speech has limits. As one example, barely a majority think handing out literature on controversial issues is “always acceptable.”

With this in mind, the problems seen on college campuses are also being seen on a whole through other pockets of society and regular everyday civic discourse. Look no further than the dreaded and cliche prospect of political discussion at Thanksgiving dinner.

How to have those difficult conversations

As a result of this increased tribalization of views, it’s becoming increasingly more difficult to engage in polite conversation with people possessing opposing viewpoints. The authors of a recent Hidden Tribes study broke down the political “tribes” in which many find themselves in:

Understanding these different viewpoints and the hidden tribes we may belong to will be essential in having conversations with those we disagree with. This might just come to a head when it’s Thanksgiving and you have a mix of many different personalities, ages, and viewpoints.

It’s interesting to note the authors found that:

You’ll find that depending on what group you identify with, that nearly 100 percent of the time you’ll believe in the same way the rest of your group constituents do.

Here are some statistics on differing viewpoints according to political party:

Understanding the fact that tribal membership indicates what you believe, can help you return to the fundamentals for proper political engagement

Here are some guidelines for civic discourse that might come in handy:

Civic discourse in a divise age

Debate and civic discourse is inherently messy. Add into the mix an ignorance of history, rabid politicization and debased political discourse, you can see that it will be very difficult in mending this discursive staple of a functional civilization.

There is still hope that this great divide can be mended, because it has to be. The Hidden Tribes authors at one point state:

“In the era of social media and partisan news outlets, America’s differences have become dangerously tribal, fueled by a culture of outrage and taking offense. For the combatants, the other side can no longer be tolerated, and no price is too high to defeat them. These tensions are poisoning personal relationships, consuming our politics and putting our democracy in peril. Once a country has become tribalized, debates about contested issues from immigration and trade to economic management, climate change and national security, become shaped by larger tribal identities. Policy debate gives way to tribal conflicts. Polarization and tribalism are self-reinforcing and will likely continue to accelerate. The work of rebuilding our fragmented society needs to start now. It extends from re-connecting people across the lines of division in local communities all the way to building a renewed sense of national identity: a bigger story of us.”

We need to start teaching people how to approach subjects from less of an emotional or baseless educational bias or identity, especially in the event that the subject matter could be construed to be controversial or uncomfortable.

This will be the beginning of a new era of understanding, inclusion and the defeat of regressive philosophies that threaten the core of our nation and civilization.

A new AI-produced commercial from Lexus shows how AI might be particularly suited for the advertising industry.