The idea that “meat is manly” has been peddled for years – in commercials, on advertisements, in stories passed down the patriarchal line for generations. In 1999, Carol J. Adams released what would be the most well-known stab at this ideology with her book “The Sexual Politics of Meat”, which is an in-depth assessment of the relationship between masculinity and meat, often pointing to American media as a primary source of meat pandering towards “masculine” society. 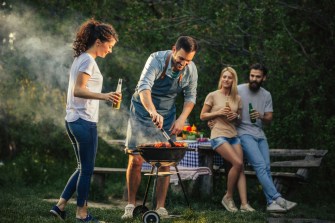 One 2018 study found that men routinely incorporate more red meat in their diet to preempt the negative emotions that are caused by threats to their masculinity.Photo by bbernard un Shutterstock

With the release of her book in 1999, Adams was able to highlight the idea that meat has become something of a symbol of masculinity, mainly by companies attempting to promote meat sales. Putting that theory to the test in today’s society, one simple search for “making salad” on a stock image site will give you countless photos of women making salads in their kitchens. Another search for “barbeque” will show dozens of men grilling meat outdoors.

This association between meat and masculinity is something that has been deemed a societal norm for decades, perhaps without many of us even realizing it. One 2018 study found that men routinely incorporate more red meat in their diet to preempt the negative emotions that are caused by threats to their masculinity.

A 2013 study argued Adams’ original theory on the sexual politics of meat with results that suggested men associate eating meat with animals being lower in a hierarchy system than humans, whereas the majority of women who eat meat try to disassociate animals from food and avoid thinking about the treatment of animals.

Alongside the narrative that meat is masculine comes the stigma around vegetarianism or veganism. These are both things that society deems “soft”, “sensitive” or “whiny”.

According to this Vegan Society survey, while the number of vegans is rapidly increasing (there were three and a half times more vegans in 2016 as there were in 2006), there is still a massive gender gap, with 63 percent of participants identifying as female and 37 percent identifying as male.

Researchers on this survey theorize that the main cause of this gap is the psychological link between meat and masculinity that is seemingly everywhere in today’s society. 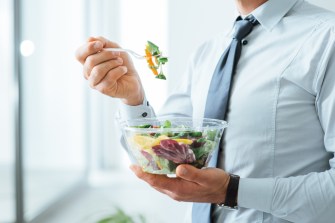 The results of a new 2020 study reveal that there are new forms of masculinity that are linked with less meat consumption and a more positive attitude towards vegetarianism. Photo by Stock-Asso on Shutterstock

A new study questions the stereotypical narrative of carnivores by taking a look at the variation in how men identify themselves and their values.

In the study, 309 male meat-eating participants were asked about their self-identification with new forms of masculinity, their attachment to eating meat, their willingness to reduce their meat intake, and their general attitudes towards vegetarians.

The results of this study suggest that men who identify more strongly with new forms of masculinity tend to consume less meat, have a weaker attachment to eating meat, and have a greater tendency to reduce their meat intake when possible. These men also showed more positive attitudes towards people who choose to be vegetarians.

This study is the first of it’s kind to underscore the idea that not all men think alike and that biological sex differences shouldn’t be taken into account when studying the consumption (or lack of consumption) of meat products.

Changing the way researchers conduct studies like this can help turn the tide.

Modern studies such as this are leaning more towards different tools that place less of a stigma on various types of masculinity. This study, for example, used the New Masculinity Inventory (NMI), where high scores can suggest holistic attentiveness, questioning of male norms, authenticity to self, and sensitivity to male privilege.

Studies like this, where not only the results but the tools used to conduct the study take into account the varying types of masculinity in the participants, can only offer more accurate results due to being more inclusive and less stereotypical.

Does vegetarianism stand a chance against meat-eating masculinity?

The sheer amount of information surrounding vegetarianism and all the attached benefits is astounding – so why is society having such a hard time keeping up? Why are men still less likely to decrease their meat consumption?

The “meat is manly” ideology will likely remain alive and well in today’s society due to advertisements and societal norms, however this study (and others that follow suit) can continue to challenge the narrative. We can continue to promote the idea that vegetarianism isn’t feminine and eating meat isn’t masculine – they are simply choices that we make based on our unique views and how we feel about the information that is presented to us.

From politics to culture, we blame “tribalism” for humanity’s problems. This explanation is entirely wrong.
13.8

Our inaugural special issue is focused on progress — the search for, the study of, and the project towards a better world.
Up Next
Neuropsych

To create wiser adults, add empathy to the school curriculum.