After being accused of abusing his power and obstructing Congress, President Donald Trump was impeached on Wednesday by the House of Representatives. The Senate is set to hold a trial early next year to determine whether the president should be removed from office. Trump is the third U.S. president to be impeached.

“We gather today under the dome of this temple of democracy to exercise one of the most solemn powers that this body can take: The impeachment of the President of the United States,” House Speaker Nancy Pelosi said Wednesday. “If we do not act now we would be derelict in our duty. It is tragic that the President’s reckless actions make impeachment necessary. He gave us no choice.”

Despite the House vote, Trump is still president, and it’s unlikely that two-thirds of the Republican-controlled Senate will vote to convict and remove him from office. For that to happen, 20 Republican senators would need to defy party and vote against Trump. 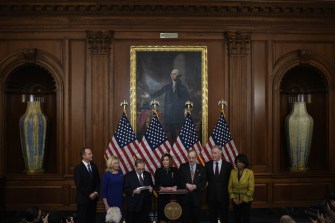 The road to impeachment has been controversial and polarized, to put it mildly. Democrats have generally framed the months-long impeachment inquiry as a necessary check on a clear abuse of presidential power and, subsequently, an obstruction of Congress.

Meanwhile, Trump has spearheaded the GOP’s strategy, which has been to flatly deny the claim that Trump withheld aid to Ukraine in exchange for personal political favors, and to paint the inquiry as the latest in a series of bad-faith attempts (or, in Trumpian terms: “witch hunt,” “scam,” “hoax“) by Democrats to bring down the president by any means necessary.

In short, it’s a mess — a sad mess. Both sides explicitly agreed on that much this week, though for different reasons, of course. To help make sense of it all, the Harvard Gazette asked some of the university’s expert alumni about what impeachment means for Trump and the state of our politics and media. Here’s what a few of them had to say.

“Based on the scorching letter that Trump just sent to Speaker Nancy Pelosi, it is clear that Trump is emerging from his impeachment more embittered than ever. Similarly, the way that he and aide Rudy Giuliani are thumbing their noses at the establishment, searching again in Ukraine for dirt against the Bidens, strongly suggests he will also emerge from this process feeling fully vindicated. An embittered, emboldened Trump will not only be a continuing threat to checks and balances as well as congressional oversight — he could become even more erratic and more destructive of our democratic norms.”

Who benefits most from impeachment?

“There are no winners or losers in impeachments, there are simply political consequences and collateral damage. The saga of the Democrat impeachment of President Donald Trump has been three years in the making: starting on election night in 2016, with the final chapter being written on Election Day of 2020.

The impeachment in the Democrat-led House of Representatives was predicted, an acquittal in the Republican-led Senate is expected, and the consequences for the 2020 election remain to be seen. If history is any guide, I expect the impeachment quest to ultimately be beneficial to President Trump and conservatives, and damaging to Democrats who sought to subvert the outcome of the 2016 election. The real damage will be in swing districts, congressional districts won by President Trump in 2016 that are currently held by Democrats. Their vote for impeachment is almost a certain first step to being voted out of office.”

Why we should differentiate between media and press

“The dramatic democratization of media since then has brought all kinds of benefits, but at a moment like this we are also weighing the costs. We are watching lawmakers talk past one another to distinct audiences who can’t hear each other; we’ve seen partisan identity, fueled by partisan media, become the defining division of our time, quite apart from differences over issues or ideology.

For more and more people, team red and team blue have become their church; the mainstream media is no longer gospel. So we should differentiate between media, which is arguably more powerful than ever, and the press, which still has a crucial civic obligation to fulfill and yet faces economic, political, and cultural challenges unlike any we’ve ever seen before.”

The scope of a president’s power to set foreign affairs

“In the role of commander in chief, presidents have a lot of leeway in foreign policy, but it is not unlimited. As Edward Corwin once wrote, the Constitution creates “an invitation to struggle” for control of foreign policy. President Trump had the right to define the American national interest in Ukraine as corruption rather than defense against Russia, but when he withheld, without explanation, funds that Congress had appropriated for the latter cause, Congress had the right to investigate, and Trump did not have the right to obstruct Congress.

President Trump also had the right to ask President [Volodymyr] Zelensky for a favor, but not one for personal gain that involved foreign involvement in our elections (which the Founders warned against). Corruption is the abuse of public power for personal gain, and that high immorality was at issue when Trump invited Zelensky to announce an investigation of a principal likely opponent in the 2020 election.”

How will impeachment affect Trump psychologically?

“Mr. Trump, caught in the humiliating spotlight of impeachment, will react as he always does: Deny any responsibility for his predicament and seek to degrade and vilify his accusers.

His disparagement of the truth-tellers who testified before Congress reliably predicts his response to impeachment: claims of victimization and a thirst for revenge.

From a psychological perspective, Trump’s impeachment has played out with the inevitability of a Greek tragedy. Arising from character flaws that were clearly evident at his inauguration, his impeachment inexorably has traced that classic arc. He remains blind to his offenses, insisting he wrote a “perfect” letter and has been subjected to a witch hunt. That is Mr. Trump’s hallmark: externalizing all blame as though his inflated self-image would be irreparably punctured by any acknowledgment of his own imperfection.”

To read the full questions and answers, head over to theHarvard Gazette.

You don’t need to completely automate a job to fundamentally change it.
Up Next
Starts With A Bang

It’s one of the two best meteor showers of the year. Don’t let the full Moon stop you.Every year, as the Earth intercepts the debris streams of comets and asteroids that […]