A new report by the nonprofit group Global Witness highlights the increasing dangers that environmentalists face around the world. At least 200 people were murdered last year for protecting the land, water and wildlife of their communities.

The report documents abuses in 24 countries, citing that these murders are rarely prosecuted.

One of the worst incidents involved the murder of park rangers in Virunga National Park in Africa’s Democratic Republic of the Congo. More than 150 rangers have been killed there in the past decade, as they try to guard against poaching. The park is home to some of the last remaining mountain gorillas in the world.

“We have strict criteria for documenting murders of land and water defenders but many other killings go unreported,” said Billy Kyte, campaign leader for Global Witness, to National Geographic. “Our report is just the tip of the iceberg for what’s really happening.”

He pointed out that there’s little data on similar travesties taking place in the Middle East, Asia, eastern Europe and Africa.

The report also points to the growing criminalization and harassment of protestors in the U.S. It specifically singles out the standoff at the Standing Rock Indian reservation in North Dakota last year for the number violent episodes involving militarized police and the National Guard. North Dakota is actually close to passing a law that would allow drivers to run over and kill environmental protesters without jail time. 18 other states are considering similar actions aimed at protestors. 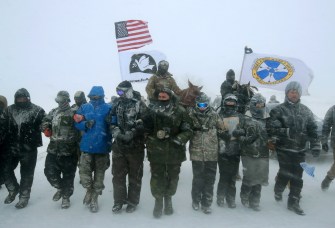 Military veterans march in support of the ‘water protectors’ at Oceti Sakowin Camp on the edge of the Standing Rock Sioux Reservation on December 5, 2016 outside Cannon Ball, North Dakota. (Photo by Scott Olson/Getty Images)

Globally, the killings of environmental activists fits into the picture of governments increasingly using violence to curb dissent. Countries with pro-business governments is where the murders of protestors can be found most commonly, with one of the worst being Brazil. Global Witness found that 49 people were murdered by loggers and large land owners in the Amazon last year. Other nations cited were Nicaragua, Colombia, India and the Democratic Republic of Congo.

In sn interview with National Geographic, Kyte called on governments, businesses and investors to stop supporting projects where the rights of protestors and local people are violated. He also called for tougher laws and prosecutions of those who carry out anti-protestor attacks.

One particular case Kyte highlighted was the assassination of the Honduran activist Berta Cáceres in 2016. She received dozens of death threats for her work to defend her land against the impact of a hydro dam that was being imposed on her community. The indigenous leader was killed in the middle of the night on March 2nd, 2016 when armed men broke into her house and shot her. She was one of 14 land and environmental activists killed in Honduras in 2016.

“Berta Cáceres endured years of threats and violence but investors said nothing, did nothing,” said Kyte.

The mission of Global Witness, the advocacy group based in London and Washington, D.C., is to end many of the worldwide environmental and human rights abuses that are driven by the “exploitation of natural resources and corruption in the global political and economic system.”

Learn more about what the organization does here:

EV charging stations are the most widespread alternative to gas and diesel pumps. Each alternative has its own hotspots and “deserts.”
Up Next
High Culture

Game of Thrones: Why Samwell Tarly Was the MVP of ‘Dragonstone’

Poop, soup, books — repeat. Who could forget that montage? Here are the key takeaways from the first episode of Game of Thrones season 7, which crashed the HBO website like wildfire taking down the Sept.