More employees are working remotely than ever before. A study published in May shows that about two-thirds of people around the world work away from the office at least one day a week. It seems they enjoy doing so; the polling agency Gallup “has found that flexible scheduling and work-from-home opportunities play a major role in an employee’s decision to take or leave a job,” it wrote in a report.

So, are brick-and-mortar offices destined to crumble if these trends continue? Maybe. Or they might be replaced by pixels.

A report from Business Insider shows how eXp Realty, a real estate brokerage company with 1,500 employees and a market cap of $610 million, has built its offices on a virtual island, doing away with physical spaces altogether, save for a legally required office in Bellingham, WA. 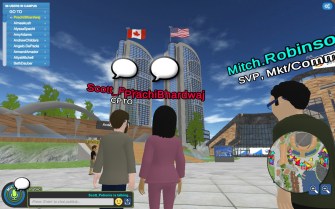 The company says its virtual offices bring some advantages, such as the ability to host 8,000 unique visitors per month and to hire full-time employees living in any part of the world. 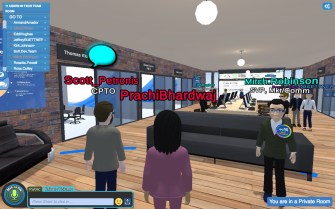 Reporter Prachi Bhardwaj took a tour of eXp Realty’s virtual island, which includes meeting rooms and offices modeled off traditional work spaces, but also the ability to meet and interact with colleagues on a beach, soccer field and speedboats. The program allows employees to interact in a variety of modes, as Bhardwaj described:

“Another small thing that I thought made a big difference was that, while we were in a virtual room, we were also in our own ‘private room,’ designated by that blue dotted circle surrounding us. That meant voices from other conversations didn’t interrupt ours, and everyone’s voices within our meeting could be heard equally clearly.” 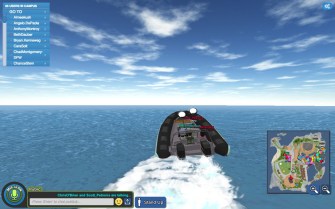 Surveys suggest that remote working brings some benefits to workers and companies, including increased productivity, lowered stress and decreased overhead. Of course, there are also drawbacks, such as remote workers feeling shunned and left out from the rest of the organization, as the Harvard Business Review reported last year.

What remains unclear, at least in the big picture, is what would happen if every worker of a company were remote. At eXp Realty, the results have been decidedly positive so far, at least according to CTO Scott Petronis. He might not have met one-third of his colleagues, but he said his colleagues are “more excited to meet one another in the real world—excited enough that they go out of their way to meet up during vacations when they’re in a coworker’s hometown or country.”

What if you didn’t go to work, but your avatar did?

Here’s how to design a work environment that gives control to employees and stimulates open conversation.
▸
with
Todd Rose
The Well

Margaret Atwood is writing a sequel to ‘The Handmaid’s Tale’

The renowned author plans to publish a follow-up to the 1985 bestseller in September 2019.