On January 20, 2017, white nationalist Richard Spencer was giving an interview during Donald Trump’s inauguration when he was punched in the face. In 1999, hundreds of protesters formed a human chain in Seattle to prevent world leaders from entering a convention center scheduled to host WTO talks. In 1987, a large group of anti-capitalist and anti-government West Germans assembled to protest police violence.

Though they varied in nature and purpose, each of these instances share several characteristics. Most notably, perhaps, is the fact that each of these moments featured a black bloc.

Generally associated with anarchists, the black bloc is a controversial protest tactic — you’ve probably seen it before on the news even if you weren’t aware of the term. It’s fairly straightforward tactic: Protesters cover themselves in black clothing and face coverings, masking their identities so that they can commit acts of often violent and illegal civil disobedience.

The origin of the black bloc

Despite being straightforward, the black bloc is a relatively new phenomenon. It was first deployed in West Germany in the 1970s and ’80s prior to the fall of the Berlin Wall. West Germany had been hit with an economic recession, preventing many young people from finding jobs. One viable method to find housing was to squat in the abandoned buildings of the inner city — due to the recession and increasing movement to the suburbs, large swathes of West German inner cities were abandoned. In these squatter communities, radical, grassroots movements sprung up that criticized the West German government’s policies, the use of nuclear power, and a mish-mash of other social and political issues.

Because they were squatting illegally and had developed some radical ideas, these anarchists clashed with police in a series of increasingly violent conflicts. Daniel Dylan Young, who writes for the anarchist site A-Infos, explains how the black bloc tactic evolved as a result. Note that Young refers to the anarchist squatters as “autonomen” in reference to their pursuit of autonomy from individuals and the state.

In response to violent state oppression radical activists developed the tactic of the Black Bloc: they went to protests and marches wearing black motorcycle helmets and ski masks and dressing in uniform black clothing (or, for the most prepared, wearing padding and steel-toed boots and bringing their own shields and truncheons). In Black Bloc, autonomen and other radicals could more effectively fend off police attacks, without being singled out as individuals for arrest and harassment later on. And, as everyone quickly figured out, having a massive group of people all dressed the same with their faces covered not only helps in defending against the police, but also makes it easier for saboteurs to take the offensive against storefronts, banks and any other material symbols and power centers of capitalism and the state. Masking up as a Black Bloc encouraged popular participation in public property destruction and violence against the state and capitalism. In this way the Black Bloc is a form of militance that mitigates the problematic dichotomy between popularly executed non-violent civil disobedience and elite, secretive guerilla terrorism and sabotage.

The tactic spread throughout Europe as the years went on. When Ronald Reagan visited West Germany in 1987 to deliver his “tear down this wall” speech, he was met by tens of thousands of protesters, about 2,000 of which were assembled in a black bloc. The reason for their uniform was made clear as they smashed store windows, flung bottles, fought police, and lit cars on fire. 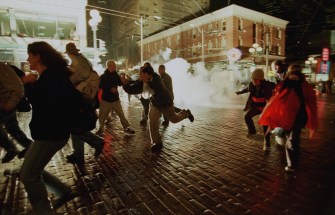 The black bloc in the “Battle for Seattle”

Today, the black bloc is seen in protests around the world, including the U.S. One of the first major instances of its use was in Seattle in 1999 at the WTO protests mentioned in earlier in this article. Forty thousand protesters arrived to demonstrate against the WTO’s trade policies, many of whom were prolabor, anticapitalist, or anarchists. The anarchists formed a black bloc, blocking streets, smashing windows, destroying cop cars, and other acts of vandalism and violence.

The “Battle for Seattle” works as an excellent example of why the black bloc tactic is controversial. Its purpose is to get away with violent, illegal acts of civil disobedience. Some would argue this isn’t the only time a black bloc is used, but historically, the tactic is deployed to commit violence and property damage. This is obviously not something the police would condone, but other, non-violent protesters often try to break up black blocs as well. After all, the use of violence can delegitimize a protest, making it easy to characterize the opposition as “thugs.” Throughout the WTO protests, black bloc anarchists were chased away by other protesters numerous times, sometimes shouting “no violence, no violence.” 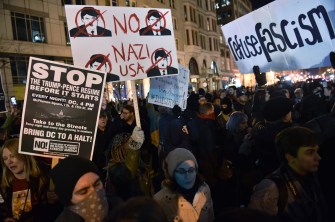 Since then, black bloc tactics have been deployed in the U.S. a number of times, and it seems like its use is ramping up. In the Occupy movement, a black bloc showed up in force, and their presence there was a serious bone of contention. In Occupy Oakland, black bloc’ers tried to set fire to a supermarket, only to be stopped by other protesters who linked their arms to protect the store. One Occupier said, “The Black Bloc anarchists, who have been active on the streets in Oakland and other cities, are the cancer of the Occupy movement.”

When the extremely controversial writer Milo Yiannopolous was scheduled to speak at UC Berkley, massive protests broke out, also featuring a black bloc. The anarchist and anti-fascist black bloc’ers threw Molotov cocktails, lit cars on fire, and ultimately caused around $800,000 in property damage. However, Yiannopolous’s speech was canceled, and while the vast majority of the student body condemned the violence, some supported the black bloc. Students wrote, “A peaceful protest was not going to cancel that event…. Only the destruction of glass and shooting of fireworks did that,” and “To people with platforms who decide when a protest should and should not be violent: You speak from a place of immense privilege.”

Do they have a point? Is violence and property damage a legitimate form of protest? Most would say no, and there’s research to suggest that the use of violence is ultimately counter-productive in any movement. In a 2015 study on the efficacy of using violence in resistance movements, professors Erica Chenoweth and Kurt Schock analyzed a data set of various violent and nonviolent movements and their outcomes. They write,

Our results suggest that the political effects [of violence] are beneficial only in the short term, with much more unpredictable and varied long-term outcomes. Alternately, violent flanks may have both positive and negative political impacts, which make the overall effect of violent flanks difficult to determine. We conclude that large-scale maximalist nonviolent campaigns often succeed despite intra- or extramovement violent flanks, but seldom because of them.

Though the UC Berkeley students managed to get Yiannopoulous’s speech canceled, they also opened themselves up to harsh criticism, likely turned public opinion away from them, and provided ammunition for the opposition. Essentially, the controversy behind black blocs boils down to the fact that winning a battle doesn’t win you the war; of course, a black bloc anarchist would say it’s hard to win a war without winning any battles.

Whatever your position on its use, understanding the black bloc, its purpose, and its likely outcomes can help in navigating the complexities of modern protest movements. The presence of violent fringes is inevitable in any sufficiently large protest. Recognizing their form can help protesters — radical or otherwise — prepare themselves for how to react.

“This is much deeper than just ‘let’s figure out how we can get both sides to get along.’”
▸
15 min
—
with
Ian Bremmer
High Culture

Detective fiction reveals how a particular society or time period looks at crime and criminal justice.

Scientology, QAnon, and Heaven’s Gate: why do we seek healing from cults?
▸
with
Jamie Wheal
Up Next
Life

Sounds wild, but it may well be so.