Mindfulness is one of Buddhism’s major contributions to the modern world. Yet as psychotherapist Mark Epstein writes, often missed by the modern adoption of mindfulness is the fact that it serves as a practice for insight development. Mindfulness by itself, or as a performance enhancement technique (as it’s often framed), misses the critical point that it is designed to teach the adherent about the transience of existence—and, as the Buddha espoused, the means for overcoming suffering associated with that fact.

While there are many religious doctrines and rituals associated with Buddhism, I find Stephen Batchelor’s secular approach refreshing. While admittedly a very basic synopsis, the groundwork of Buddha’s teachings are easy enough to understand: we suffer because we have taken a wrong view of existence; through training and society we are ignorant of nature. Nature, during Buddha’s time (and our own), means war, pestilence, politics, and greed, as well as disease.

Far from being a recluse meditating in a forest, Buddha ran a number of communes and constantly interacted with local lords. He was, first and foremost, a statesman. He knew how society operated and devised his principles based on the environment he lived within.

Buddha was also aware of the hopes we pin on transcendence and mysticism. He generally refused to address metaphysics, instead directing everyone’s attention to the present moment. The contemplative practice is not only for good times, but for all moments, including the roughest times. This is why the following Buddhist thinkers are so relevant right now.

A foundational Buddhist principle: the recognition that everything is transient. We hear it over and over right now: “I just want things to return back to normal.” Normal is relative; there is no chance of returning to what was before. A new challenge has been introduced. Even if we overcome COVID-19 with a vaccine or widespread treatment, flaws in our health care and political systems have been exposed.

There is no “going back.” There is only being where we are, as painful as that is for many. The Buddhist practice was designed with such moments in mind. And it is a practice, a hard-won one at that. Knowing that others have experienced such moments provide a sense of comfort as well as a framework for moving forward. The world has again changed. We must change with it.

Pema Chödrön: What to Do When You Lose It Completely

Pema Chödrön: What to Do When You Lose It Completely

“If we commit ourselves to staying right where we are, then our experience becomes very vivid. Things become very clear when there is nowhere to escape.” Pema Chödrön, When Things Fall Apart: Heart Advice for Difficult Times

One of the unique factors in this very politically polarized time is that a virus does not discriminate due to political beliefs. There is truly nowhere to escape during this public heath crisis, and so we are forced to confront what is right in front of us.

“Some people are content in the midst of deprivation and danger, while others are miserable despite having all the luck in the world. This is not to say that external circumstances do not matter. But it is your mind, rather than circumstances themselves, that determines the quality of your life. Your mind is the basis of everything you experience and of every contribution you make to the lives of others. Given this fact, it makes sense to train it.” — Sam Harris, Waking Up: A Guide to Spirituality Without Religion

Training includes meditation, something that Sam Harris knows well. Many of us are faced with suddenly being thrown back to the base of Maslow’s pyramid. Those working in the hospitality, entertainment, and numerous other industries have to pay bills. The survival instinct is kicking in. Yet mindset still matters.

“Even if the familiar is unsatisfactory, we tend to cling to it because we are afraid of the unknown.” Karen Armstrong, Buddha

The scariest aspect of the present moment is that no one knows. We can only speculate and hope experts provide the best guidance they can. That said, clinging to what was before will not help.

“If we can be open…we find that life’s unpredictability is full of interesting and invigorating challenges. These challenges engage us in unexpected and unanticipated ways and allow for the freedom of unscripted responsiveness. Right Action is more than just a reaction. It springs from an attunement to the moment that the confines of convention obscure.” Mark Epstein, Advice Not Given: A Guide to Getting Over Yourself

After Buddha developed his Four Noble Truths, he needed a prescriptive plan. This arrived in the form of The Noble Eightfold Path. Here, Epstein addresses one of these limbs, Right Action:

“To live on this shifting ground, one first needs to stop obsessing about what has happened before and what might happen later. One needs to be more vitally conscious of what is happening now. This not to deny the reality of past and future. It is about embarking on a new relationship with the impermanence and temporality of life. Instead of hankering after the past and speculating about the future, one sees the present as the fruit of what has been and the germ of what will be. Gotama did not encourage withdrawal to a timeless, mystical now, but an unflinching encounter with the contingent world as it unravels moment to moment.” Stephen Batchelor, Confessions of a Buddhist Atheist

What I’ve always appreciated about Buddhism is its initial refusal to discuss metaphysical concepts (thought that did come later). Here Batchelor sums up why we need to focus on what’s in front of us. 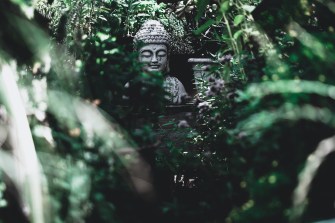 “We cannot attain true peace of mind merely by seeking our own salvation while remaining indifferent to the welfare of others.” Philip Kapleau, The Three Pillars of Zen: Teaching, Practice, and Enlightenment

If there is any singular lesson we can all learn right now, it’s the reality of another Buddhist principle: interdependence. We’re all in this together.

“The key, taught the Buddha, lies in not taking trauma personally. When it it seen as a natural reflection of the chaotic universe of which we are a part, it loses its edge and can become a deeper object of mindfulness.” Mark Epstein, The Trauma of Everyday Life

In an individualistic culture such as America, it is easy to take affronts personally. Again, disease does not discriminate. Yes, it is predominantly attacking people with compromised immune systems, but that has nothing to do with the usual markers we use to divide societies, such as race, class, or gender. The normal definitions of self are useless in the face of a pandemic, forcing us to reconsider what “self” implies.

“Each instance of craving involved an escape from the here and now, a desire for becoming or being something or someplace other than what the present moment offered. But to seek ceaselessly some new state of being while at the same time striving for permanence was to expose oneself to frustration.” Pankaj Mishra, An End to Suffering: The Buddha in the World

Attachment is one of the main forms of bondage. We are, as stated, in a new world. The sooner we recognize that, the better it will be for our mental health.

“Our pains are sufferings, obviously. Our ordinary pleasures seem the opposite, but the seeker of enlightenment knows that they bring suffering by being fleeting and addictive, leaving us more discontent when we lose them than if we never had them.” Robert Thurman, Inner Revolution: Life, Liberty, and the Pursuit of Real Happiness

The tendency to avoid pain at all costs and seek pleasure has always been flawed. Now we are being collectively forced to confront that fact.

“The practice of embodied attention challenges our habitual perceptions of self and world as permanent, satisfactory, and intrinsically ours. By stabilizing attention through mindfulness and concentration, we begin to see for ourselves how pleasurable and painful feelings trigger habitual patterns of reactivity and craving. These two insights not only undermine our inclinations to hold on to what we like and to push away what we fear but open up the possibility of thinking, speaking, and acting otherwise.” Stephen Batchelor, After Buddhism: Rethinking the Dharma for a Secular Age

In the end, how we act in the face of adversity reveals our true character. We can’t always change the external reality, but we can change how we react.

Being mortal makes life so much sweeter.
Up Next
Hard Science

Want to help design a moon robot? NASA needs you.

A NASA-sponsored competition asks participants to improve the design of a bucket drum for moon excavation.