Last week a group of over 1,200 pastors signed a petition to announce that their churches will be open for business beginning on May 31. This announcement defies California’s shelter-at-home orders—in fact, a federal court just backed Governor Newsom’s directives. Under the state’s four-stage reopening roadmap, churches are allowed to resume corporate worship in Stage 3. At the moment, California is early in Stage 2. Church leaders claim they need to open now.

This problem isn’t confined to California, as churches from Massachusetts to Texas are already open for business. This story doesn’t always have a happy ending. A Catholic church in Houston had to shut its doors again after five church leaders were diagnosed with COVID-19. Two weeks after reopening, a Georgia church closed after several families that attended discovered they had the virus.

In Sacramento County, California, 71 people that attended a service later learned they were infected. The virus has hit African Americans especially hard. So far, 33 bishops, pastors, and reverends have died from the disease. Epidemiologist Kimberly Powers says indoor religious services are a high risk for transmission.

An ongoing spreadsheet database by mathematical modeler Gwen Knight has linked around 220 different church events resulting in disease transmission. Her detailed report links to each case, which tracks religious services around the world.

But not all religious are rushing back to the pulpit. Father James Martin, Jesuit priest and consultant to the Vatican’s Secretariat for Communications, called for leaders to listen to the advice of public health officials and state orders. He said reopening early is “the opposite of pro-life.” California churches that have reopened are producing new clusters of cases. Martin is hosting services on his Facebook page instead of in person.

All of this makes you wonder: What is the rush to reopen really about?

Coronavirus: who is driving the US protests against lockdown?www.youtube.com

The U.S. government has been unprepared from day one. Are shut-downs the best idea? There are credible cases against it. This administration has gutted our health care system, which was already hemorrhaging from previous administrations supporting the for-profit model. Our response to this virus has been piecemeal because that’s exactly how health care has been dismantled. That trend leaves the onus to state and local governments.

The rebellion against state orders has largely been Christian, as mosques and temples have remained quiet. Religious believers claim their houses of worship are essential even though churches are not necessary for survival. Food stores, pharmacies, and laundromats, sure. Appliance repair and plumbing, understandable.

In California, questionable inclusions are on the list of essential businesses. Florists? Big Flower might rule yes, but that’s a strange one. Speaking of flower, a bit of an uproar ensued when marijuana dispensaries remained open. Yet my local dispensary only allows a handful of people to enter, masks are required, and social distancing is strictly enforced. Is that really possible in a church?

Perhaps. Smaller services, absolutely. Some of the stated reasons for reopening don’t add up, however. Over 12,000 Catholic Churches in the United States applied for small business loans after lockdowns began. In total, roughly 9,000 received them. Yet on the petition to reopen, the author opens with a Martin Luther King, Jr. quote which reads, “[The church] must be the guide and the critic of the state, and never its tool.”

How does an institution alleging to be the “guide of the state” claim it doesn’t have to play by the state’s rules, yet turn to the same governing body—one it doesn’t pay taxes to—and request money? This is a longstanding problem. Revenue from church taxes would equal $71 billion a year. A lot of heat is rightfully aimed at Amazon for not paying its fair share. Tax evasion from religious organizations is equally problematic. 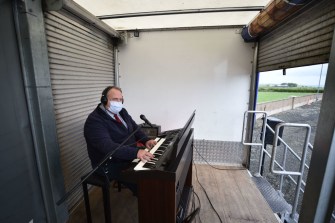 The church organist plays for the congregation during a drive-in Sunday church service at Dunseverick Baptist Church on May 24, 2020 in Bushmills, Northern Ireland.Photo by Charles McQuillan/Getty Images

Many churches are small and rely on member donations. While an understandable concern, the problem with church structure must be addressed. A 2018 investigation into the Catholic Church in Australia uncovered $30 billion in holdings in that country alone. The overall wealth of the Church is, according to one journalist, “impossible to calculate.” For an institution to claim independence (and even superiority) over government yet turn to the same government for taxpayer money needs to be addressed.

The social impact is hard on church communities, as it is on all communities. Increasing mental health distress due to isolation is a growing problem we need to reckon with as a society. We must also ask how a church service is different from other gatherings. Many religious will claim this to be the case, but plenty of Americans find solace in yoga studios, health clubs, and sporting events. There is no supremacy for one social circle over another. This is about transmission of disease, not personal preferences.

Prayer has long been a group activity, yet it is also an individual connection, as Matthew 6:5-6 states. Church goers are missing the feeling of being in a group. Severing this connection is painful. But we mustn’t confuse loss of group for loss of faith.

The loudest garner headlines. Fortunately, plenty of religious leaders are putting smart guidelines in place for reopening. As with every public event, vigilance is required. A number of churches appear ready to practice precaution for the health of their flock. They’re also listening to public health officials for a reopening timeline.

Finally, there’s a belief floating around that God will protect the faithful. We don’t have to spend too much time on this, except to shame anyone using the pulpit to make such a ridiculous claim. Viruses don’t pray. They only prey. Their followers deserve better than that.

What can your microwave tell you about your health?