Self-help books are consistently on the best-seller lists across the world. We can’t seem to get enough of happiness advice, wellness gurus, and life coaches. But, as the Book of Ecclesiastes says, there is nothing new under the sun. The Ancient Greeks were into the self-help business millennia before the likes of Dale Carnegie and Mark Manson.

From the 3rd century BCE until the birth of Jesus, Greek philosophy was locked into an ideological war. Four rival schools emerged, each proclaiming loudly that they — alone — had the secret to a happy and fulfilled life. These schools were: Stoicism, Cynicism, Skepticism, and Epicureanism. Each had their advocates and even had a kind of PR battle to get people to sign up to their side. They were trying to sell happiness.

Epicurus’s guide to living is noticeably different from a lot of modern self-help books in just how little day-to-day advice it gives.

Many of us are familiar with Stoicism, a topic I covered recently, because it forms the foundation of cognitive behavioral therapy. Skepticism and Cynicism have become watered down or warped variations of their original forms. (I will cover these in future articles.) Today, we focus on the most underappreciated of these schools, the Epicureans. In their philosophy, we can find a surprisingly modern and easy-to-follow “Four Part Remedy” to life.

The Epicureans were some of history’s first materialists. They believed that the world was made up only of atoms (and void), and that everything is simply a particular composition of these atoms. There were no gods, spirits, or souls (or, at most, they’re irrelevant to the world as we encounter it). They thought that there was no afterlife or immortality to be had, either. Death is just a relocation of atoms. This atheism and materialism was what the Christian Church would later come to despise, and after centuries of being villainized by priests, popes, and church doctrine, the Epicureans fell out of fashion.

In the atomistic, worldly philosophy of the Epicureans, all there is to life is to get as much pleasure as you can and avoid pain. This isn’t to become some rampant hedonist, staggering from opium dens to brothels, but concerns the higher pleasures of the mind.

Epicurus, himself, believed that pleasure was defined as the satisfying of a desire, such as when we drink a glass of water when we’re really thirsty. But, he also argued that desires themselves were painful since they, by definition, meant longing and anguish. Thirst is a desire, and we don’t like being thirsty. True contentment, then, could not come from creating and indulging pointless wants but must instead come from minimizing desire altogether. What would be the point of setting ourselves new targets? These are just new desires that we must make efforts to satisfy. Thus, minimizing pain meant minimizing desires, and the bare minimum desires were those required to live. 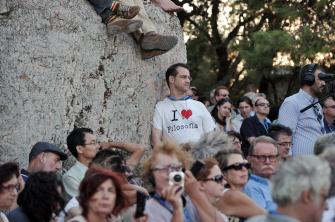 Given that Epicureans were determined to maximize pleasure and minimize pain, they developed a series of rituals and routines designed to help. One of the best known (not least because we’ve lost so much written by the Epicureans) was the so-called “Four Part Remedy.” These were four principles they believed we ought to accept so that we might find solace and be rid of existential and spiritual pain:

1. Don’t fear God. Remember, everything is just atoms. You won’t go to hell, and you won’t go to heaven. The “afterlife” will be nothingness, in just the same way as when you had no awareness whatsoever of the dinosaurs or Cleopatra. There was simply nothing before you existed, and death is a great expanse of the same timeless, painless void.

2. Don’t worry about death. This is a natural corollary of Step 1. With no body, there is no pain. In death, we lose all of our desires and, along with them, suffering and discontent. It’s striking how similar in tone this sounds to a lot of Eastern, especially Buddhist, philosophy at the time.

3. What is good is easy to get. Pleasure comes in satisfying desires, specifically the basic, biological desires required to keep us alive. Anything more complicated than this, or harder to achieve, just creates pain. There’s water to be drunk, food to be eaten, and beds to sleep in. That’s all you need.

4. What is terrible is easy to endure. Even if it is difficult to satisfy the basic necessities, remember that pain is short-lived. We’re rarely hungry for long, and sicknesses most often will be cured easily enough (and this was written 2300 years before antibiotics). All other pains often can be mitigated by pleasures to be had. If basic biological necessities can’t be met, then you die — but we already established there is nothing to fear from death.

Epicurus’s guide to living is noticeably different from a lot of modern self-help books in just how little day-to-day advice it gives. It doesn’t tell us “the five things you need to do before breakfast” or “visit these ten places, and you’ll never be sad again.” Just like it’s rival school of Stoicism, Epicureanism is all about a psychological shift of some kind.

Namely, that psychological shift is about recognizing that life doesn’t need to be as complicated as we make it. At the end of the day, we’re just animals with basic needs. We have the tools necessary to satisfy our desires, but when we don’t, we have huge reservoirs of strength and resilience capable of enduring it all. Failing that, we still have nothing to fear because there is nothing to fear about death. When we’re alive, death is nowhere near; when we’re dead, we won’t care.

When you hold yourself financially accountable, you’re likely to gain more than just some extra money.
Progress

Literature’s first utopia shows how far we’ve come.
Up Next
Starts With A Bang

Do they have real, observable effects, or are they merely calculational tools?When we think about the Universe on a fundamental level, we normally think about how to break up everything […]