Maria Konnikova is the author of two New York Times bestsellers: The Confidence Game , winner of the 2016 Robert P. Balles Prize in Critical Thinking, and Mastermind: How to[…]
Go to Profile
Videos

How con artists manipulate your emotions in genius (and evil) ways

The Ben Franklin effect is an oddly simple phenomenon. It was first discussed, as one could guess, by the man himself in his autobiographical writings. Benjamin Franklin used it on legislators that he was at odds with, to make them be more kind to him.

Franklin said, “He that has once done you a kindness will be more ready to do you another, than he whom you yourself have obliged.” What he was getting at is that if you ask someone for a pencil once and they oblige, it establishes a kindness pattern. They’re more likely to help you again later on and perhaps in a bigger capacity. That’s right, you might get a pen out of it next time. Whoa, Nelly. And the final part of his quote is not to be glossed over: this kind person may even be nicer to you than someone you have done a favor for, who technically owes you one back.

Maria Konnikova, psychologist, writer for The New Yorker, and author of The Confidence Game , explains that this same principle is also called ‘Foot in the Door’ and is a favorite tactic of con artists; they will start by asking you for a small favor first, and if you acquiesce, then they’ll go for a bigger request. The other tactic Konnikova describes is a bolder move, a strategy aptly called ‘Door in the Face’. Unlike the Ben Franklin effect, this goes overboard. Instead of asking for something small and manageable like $20 for example, they’ll ask if they can borrow your brand-new car for a weekend. The other person will freak out, say no, and slam the preverbal door in the con artist’s face, who backs off, apologizes, and says they understand. We’re all friends, after all. After this, they move on to what they really wanted. It’s not as bad as the first one, but since people want to stay on decent terms with each other, weighted by guilt, many people feel the need to say yes to the second favor. You just lost yourself $20.

These are two common psychological games that con artists use. These techniques allow them to become friends with their victims, ease them into the con, and play on their empathy. So it is best to always be on the lookout for red flags of deception, like a friendship moving too fast, followed by a request for a favor, or someone who mirrors all your interests or beliefs in an attempt to win you over (suspiciously) quickly. 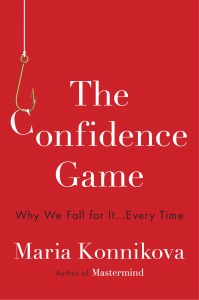 Maria Konnikova:  While there's really no way to tell if someone is lying, so there's no way to spot deception and say you're not telling the truth, and there's no such thing as the Pinocchio's nose of lying, no one sign that will tell you this person is not to be trusted. But we can learn to recognize some of the persuasive techniques that people might use to try to get us on their side. Unfortunately it starts with getting us to like them. And so once you like someone it's much more difficult to spot these things because you're already subjective. But how do people get you to like them? Well, we like people who are similar to us and we like people who like the things we like. We like people who are familiar to us, oh, I've seen you around. I know who you are. And people who are trying to sell us something, be they con artists or just softer sales people, they know this and so they latch onto characteristics about us that are pretty apparent. They might find out that I'm from the Boston area and say, "oh the Red Sox," and try to see my reaction. Am I an avid Red Sox fan? If I am the conversation will now go in that direction. All of a sudden we're bonding over baseball. This can't be a bad person. And now all of a sudden they're selling me something but now from a very different point of view, from a point of view of a friend of someone who's a buddy, of someone who's really cool rather than the point of view of someone who is a sales person.

So that's something to be on the lookout. Although it's terrible because I'm basically saying hey don't make new friends. But what I mean is if a friendship advances very, very quickly and on very superficial basis and is followed very soon there after by a request then that might be a red flag that the request might be something that you want to think twice about. Then there are ways of framing requests that we know are more likely to be successful. For instance, there's a technique that's called the foot in the door. Get your foot in the door and then you can ask for what you really want. So how do you get the foot in the door? First you ask for something really, really small. So I might ask you for just two minutes of your time. I want your opinion on a purchase I'm making. And I know that I really trust your opinion on cell phones so can you just help me out do you like your phone? What do you like about it? Okay. Wonderful. Thank you so much. We're done.

A few weeks later you might ask me to donate or rather I might ask you since I'm the one who is the con artist in this scenario, I might ask you to write me a letter of recommendation or donate an hour of your time to a volunteer organization I work for or whatever my real ask is. But because you've helped me in the past, even though it was a very, very small favor that you were asking, you're much more likely to help me now because we like to be consistent. And if we think that we're nice people who help others because we've already helped someone we're going to keep helping. Plus, if I'm the type of person who was worth helping once I'm worth helping again because clearly you didn't make the wrong decision the first time around. So repeat requests are really hard to say no to, but sometimes we have to. Sometimes you have to realize that you know what, just because I said yes once doesn't mean that I should say yes a second time and it doesn't make me a bad person to say no. It's one of those things that you have to give yourself permission to say no and you have to give yourself permission to exit situations that we don't feel comfortable in.

There's a technique called the door in the face, which is the opposite of the foot in the door. So you ask for something egregious. I don't really know you very well but I'm going to ask you to spend a day at the zoo with my students. And you're going to say are you insane, in your mind, you probably wouldn't say this to my face, but you're certainly going to say no because that's something that's really a huge amount of time. So then a few weeks later I'll say, "Oh no course I totally understand. It's a huge imposition. I totally get it. Don't worry about it." A few weeks later I come back to you and say, "Hey, would you be willing to come in and talk to my class for an hour and then answer some questions?" You're going to say yes, even though that's a huge request still. And if I had just asked you that you probably would have said no but you're still feeling so guilty about saying no the first time around, even though I said that I really didn't mind and that I totally understood, you're going to be feeling so guilty that you're going to say yes. Door in the face. First you make them slam the door in your face because slamming the door in someone's face feels terrible and we hate feeling like bad human beings so then we'll try to redeem ourselves and then we'll become your best friend; we'll keep helping you.

Once again, something that uses human emotions and our perception ourselves against us. We want to feel like good people. Con artists know this and they take advantage of it by making us do things that will make us feel like good people. And putting us in situations where it's really difficult to refuse because refusing would mean we're not good people and that's not a feeling that we're comfortable with at all. They also love using, you know, if we talk about other argumentative strategies a lot of it has to do with scarcity, you know, get it while it's hot; this isn't going to last. When ever anyone puts time pressure on you that's a really bad sign. Now I know that certain companies when they're making you a job offer they'll make it an exploding offer, so this job offer is only on the table for the next 48 hours and if you don't take it it's gone.

A lot of people will take that job offer, whereas if they had a moment to cool down and to think about it they would have realized that it's not good for them. Well, you would think that employers aren't con artists, but that is a page right out of the con artist playbook. How do you pressure people into doing something that they might not otherwise do for your own ends because you want that person to take this job? Well, if you really wanted them but you were playing by the rulebook you would give them time to think about it. Making it an exploding offer puts them in a situation where, again, they're emotionally hot, they can't reflect and so they feel like they can't say no. Because what happens, you know, we're right back with uncertainty, what happens if I have no job? What happens if nothing else comes up and I say no? I can't run that risk. This might not be quite right for me but I'm just going to accept it. Con artists put us in that situation all the time. They just fill the world with exploding job offers.

Hey Bill Nye! Can We Bridge the Gap Between Science and Religion?