Much has been said and written about Rowling’s inauspicious beginnings. In 1995, she was a divorced single mother working several jobs and surviving on state’s assistance. A few years later, she was the most famous fantasy author of all time and a multi-millionaire. Today, she is very active in charitable and political activism. She has continually been rated as one of the world’s most powerful and influential celebrities.

Today’s words of wisdom are excerpted from her 2008 commencement speech at Harvard. Rowling created one of the most famous villains in the entirety of the English-language literary pantheon: the nefarious and genocidal Lord Voldemort. The evil wizard was an entity of his own though the influence and inspiration for the character from real-life despots is undeniable. In the following quote, Rowling explains how figures like Voldemort are able to take power when the masses languish in the sea of their own apathy: 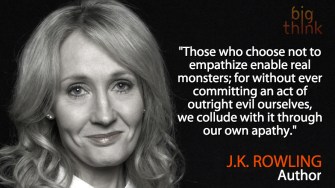 Words of wisdom from J.K. Rowling: “Those who choose not to empathize enable real monsters; for without ever committing an act of outright evil ourselves, we collude with it through our own apathy.”

Science and Buddhism agree: There is no “you” there

As neuroscience has begun studying the mind, they have looked to those who have mastered the mind. University of British Columbia researchers have verified the Buddhist belief of anatta, or not-self.