Charles Robert Darwin (1809 – 1882) was an English naturalist and geologist, best known for his contributions to evolutionary theory. He established that all species of life have descended over time from common ancestors, and introduced the scientific theory that this branching pattern of evolution resulted from a process that he called natural selection, in which the struggle for existence has a similar effect to the artificial selection involved in selective breeding. In modified form, Darwin’s scientific discovery is the unifying theory of the life sciences, explaining the diversity of life.

More than any other person in history, Darwin shaped our fundamental view of life. Species diversification through natural selection is the principle through which we understand the great diversity of life on our planet, as well as the genesis of our own species.

But the forces at work in nature, as Darwin observed them, are sometimes misapplied to human society under the term of Social Darwinism. In its mildest form, Social Darwinism describes how companies rise and fall in a free-market system. But history is littered with prejudiced ideas that use Darwin to claim legitimacy. 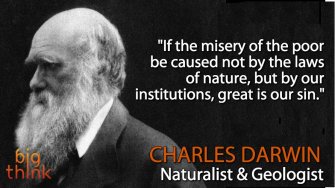 Darwin himself cautioned that the strong logic of evolution should not come at the cost of human sympathy. He foresaw a time when slavery would be justified through naturalistic explanations, but Darwin refused to submit to them. In Darwin’s journal, today published under the title The Voyage of the Beagle, he writes:

“It is often attempted to palliate slavery by comparing the state of slaves with our poorer countrymen: if the misery of our poor be caused not by the laws of nature, but by our institutions, great is our sin; but how this bears on slavery, I cannot see… Those who look tenderly at the slave owner, and with a cold heart at the slave, never seem to put themselves into the position of the latter; what a cheerless prospect, with not even a hope of change! [P]icture to yourself the chance, ever hanging over you, of you wife and your little children — those objects which nature urges even the slave to call his own — being torn from you and sold like beasts to the first bidder! And these deeds are done and palliated by men, who profess to love their neighbours as themselves, who believe in God, and pray that his Will be done on Earth! It makes one’s blood boil, yet heart tremble, to think that we Englishmen and our American descendants, with their boastful cry of liberty, have been and are so guilty.”

Karen Armstrong, a TED Prize-winning scholar of comparative religion best known for her bestselling 1993 volume A History of God, shares Darwin’s opinion. She argues that passive worship and dry theological study accomplish nothing. True religion is the active “discipline” of compassion.

Is Pluto A Planet Now?

Now that New Horizons has flown by the Plutonian system, can it be considered a planet after all?“Words are the source of misunderstandings.” –Antoine de Saint-ExupéryBack in 1930, Clyde Tombaugh […]