J.K. Rowling (b. 1965) is author of the Harry Potter series of books, the best-selling book series of all-time as well as the source material for one of the highest-grossing film series of all time. So she’s sort of a big deal.

Much has been said and written about Rowling’s inauspicious beginnings. In 1995, she was a divorced single mother working several jobs and surviving on state’s assistance. A few years later, she was the most famous fantasy author of all time and a multi-millionaire. Today, she is very active in charitable and political activism. She has continually been rated as one of the world’s most powerful and influential celebrities.

Today’s words of wisdom are excerpted from her 2008 commencement speech at Harvard. Before Harry Potter, Rowling considered herself a failure. Her future success came about because she gave herself the opportunity to fail once more… and then didn’t. Rowling, like so many successes before her, knew that risk was the fountain from which happiness flows. 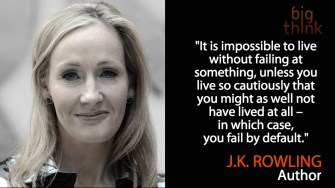 “It is impossible to live without failing at something, unless you live so cautiously that you might as well not have lived at all — in which case, you fail by default.”

It’s able to see patterns rather than all possible solutions.