Franklin Delano Roosevelt (1882-1945) was the 32nd president of the United States and longest-serving president, serving from 1933 until his death in 1945. He was president throughout much of the Great Depression of the 1930s and the United States’ involvement in World War II during the 1940s. He is also well-known for the New Deal, a set of programs for relief, recovery, and reform that expanded the U.S. government’s role in managing the economy. 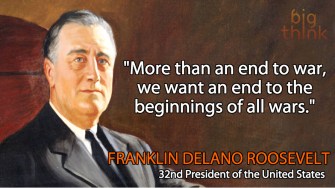 We’re currently entrenched in year 15 of the Global War on the Boogeyman Terror. There are conflicts raging in the Middle East, Eastern Ukraine, and parts of Africa. It’s safe to say that FDR’s vision has not been fully realized.

To approach such a question, one must pinpoint what FDR meant by “the beginnings of all wars,” as well as gauge whether the range of rationales for conflict have evolved since his time. Knowing the major conflicts Roosevelt lived through, he would probably chalk the following up as main causes of war: Nationalism, regionalism, sectarianism, obtaining resources, global influence, maintaining economic dominance, colonization/annexation, internal revolution, civil war, and fighting off an oppressor.

Have any of those ceased to be the stuff that start wars? You could argue that our globalized world has made full-out war a less-desirable approach for achieving some of those goals. Yet taken altogether, groups of people are still taking up arms for many of the reasons above.

To achieve an “end to the beginnings of all wars,” the world would need to do away with tribalism and hegemony. That’s not the sort of thing anyone should be betting their life’s savings on.

Like it or not, these scenarios are part of what makes us human, and they’re not going away anytime soon.

Why look for rare, precious metals on Earth when you can find them here?“Well, this is a thing unheard of. An Elf would go underground, where a Dwarf dare not. […]