Søren Kierkegaard (1813-1855) was an influential Danish writer, theologian, and social critic who is widely regarded as one of the very first existentialist philosophers. His notable works include Fear and Trembling, The Sickness Unto Death, and Either/Or. While respected during his day, Kierkegaard’s popularity grew largest among the philosophers and social thinkers of the mid- to late-20th century.

With the first televised debate of the 2016 campaign being held tonight, we thought we’d share one of Kierkegaard’s more cutting social critiques of free society types who speak without thinking. Sound familiar? 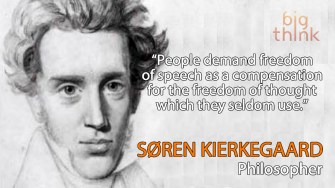 “People demand freedom of speech as a compensation for the freedom of thought which they seldom use.”

Want to know more about Kierkegaard and other giants of classic literature and thought? Check out the video below via Floating University featuring Jeffrey Brenzel.

Throwback Thursday: The Science Of The Cosmic Microwave Background