Maya Angelou (1928-2014) was an African-American poet and author most famous for her landmark 1969 book I Know Why the Caged Bird Sings, the first of seven autobiographical accounts of her incredible life.

Angelou was and still is revered for her sage wisdom and keen insights into race, class, and self-determination. The quote below reflects her belief that a well-lived life relies upon the courageous dedication to lead that life. It takes bravery to dedicate oneself to virtue; you can’t have the latter without a whole lot of the former. 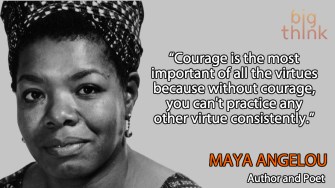 We are fortunate to have author and talk show host Tavis Smiley among our many Big Think Experts. Smiley recently published a book titled My Journey with Maya, a recollection of his 30-year friendship with the iconic American poet. Below, Smiley discusses some of Angelou’s most helpful pieces of advice:

Does Living Near a Nuclear Plant Increase Cancer Risk? The NRC Was Right to Cancel a Study to Find Out.

The Nuclear Regulatory Commission has dropped a study on whether living near a nuclear plant increases the risk of cancer. Criticism of this decision is predictable, but unwarranted. The study would only have found what other research has shown. There is no link