Oliver Wolf Sacks (1933 – 2015), a British neurologist and writer, was professor of neurology at New York University School of Medicine and professor of neurology and psychiatry at Columbia University. He also held the position of “Columbia Artist,” which recognized his contributions to art and science. Sacks was diagnosed with terminal metastatic liver cancer in January 2015. He died on 30 August 2015 in his home in Manhattan at the age of 82 from the disease. 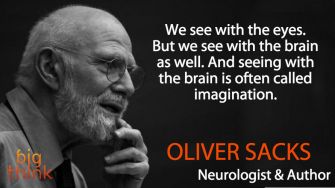 The New York Times said of his passing this morning:

“Describing his patients’ struggles and sometimes uncanny gifts, Dr. Sacks helped introduce syndromes like Tourette’s or Asperger’s to a general audience. But he illuminated their characters as much as their conditions; he humanized and demystified them.

In his emphasis on case histories, Dr. Sacks modeled himself after a questing breed of 19th-century physicians, who well understood how little they and their peers knew about the workings of the human animal and who saw medical science as a vast, largely uncharted wilderness to be tamed.”

The Map as Persuader

Some maps would rather make a point than give directions.