Béla Bartók (1881–1945) was a Hungarian composer, pianist and collector of Eastern European and Middle Eastern folk music. He is considered one of the greatest composers of the 20th century and was also one of the founders of the field of ethnomusicology. Ethnomusicologists examine the many musics of the world within the contexts of culture, society, cognition, biology, and other dimensions.

The following words of wisdom communicate his thoughts on the non-competitiveness of art: 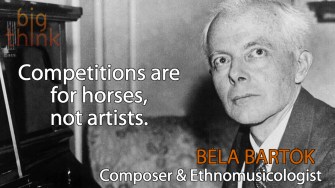 “Competitions are for horses, not artists.”

Below, composer and conductor Leon Botstein examines music through a lens of peace and war:

Art Is a Process of Evolution, Not Revolution

Words of wisdom from Hungarian composer Béla Bartók, the founder of ethnomusicology: “In art there are only fast or slow developments. Essentially it is a matter of evolution, not revolution.”