In 1915, the 36-year-old Albert Einstein submitted his revolutionary description of gravity to the Berlin Academy of Sciences, a masterpiece of the human intellect that became known as the general theory of relativity. The journey had been long and hard, ten years in total, with many false starts and wrong turns. From then on, gravity, the universe, the nature of space and time, and their relation to matter and energy would never be the same.

Until then, the prevalent theory of gravity was devised by Isaac Newton in 1687, just 192 years before Einstein’s birth. The theory, incredibly powerful, described gravity in a somewhat mysterious way, positing that any two massive bodies attract each other with a force proportional to their masses and inversely proportional to the square of their distance. This action-at-a-distance bothered Newton, who did not venture an explanation of the fact that his force was an instantaneous interaction across space. How could the sun attract Earth and you attract your computer without touching? How could this interaction be instantaneous? Still, the theory worked, and that is what mattered.

Until it didn’t. By the late 19th century, anomalies in the orbit of Mercury could not be explained applying Newton’s force. Einstein was convinced that nothing could be instantaneous in the universe. The limited speed was that of light, and correcting for this changed everything. In 1905, he showed that for two observers moving at constant speeds with respect to each other, they would measure distances and times differently. A moving stick was shorter, a moving clock ticked slower. This was his special theory of relativity, special for being confined to motion at constant speeds. The next step, he quickly realized, was to generalize this theory to objects that could accelerate, like pretty much everything. And here came the surprise.

In what Einstein deemed “the happiest thought of my life,” he realized that a freely falling body would not feel its own weight. (That is why you feel “lighter” when going down a fast elevator. The downward acceleration changes the net pull from Earth’s gravity. If the elevator falls, you just float, albeit with a tragic outcome.) From this vision, Einstein concluded that gravity and acceleration are indistinguishable. The pushing and pulling of accelerated motion could, in principle, be mimicked by placing masses in front of or behind you.

Now, imagine a cannonball shot from the top of a hill. It will trace a parabolic curve until it hits its target down below. That is gravity accelerating the cannonball downward. Following his vision, Einstein turned things upside-down.

What if, instead of thinking of the cannonball describing a curved path in an inert flat space, we imagined space itself being curved? The larger the mass concentration, the more it would bend space, corresponding to a larger acceleration due to gravity. Mercury, being the planet closest to the sun, would have its orbit distorted by the curved space around it. When Einstein applied his theory to Mercury, he discovered that the planet’s orbital anomaly could be described beautifully. 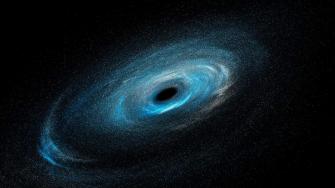 So, Einstein’s theory served as a correction to Newton’s for objects with large enough masses. Although every massive body distorts space around its vicinity (including you), the effect is tiny. But stars, large agglomerates of mass, and most dramatically, black holes, can bend space in very noticeable ways.

The most immediate consequence of a bent space is that light, always searching for the shortest path between two points, will follow the spatial curvature: a ray of light will curve along a bent space. So, Einstein predicted that mass would bend space that would bend light itself. Amazing.

This bending of light was confirmed in 1919 during a solar eclipse, catapulting Einstein to international stardom overnight. Just as a lens, a piece of curved glass, bends light so that people can see better, space will also act as a lens, distorting the paths of light from distant stars and other sources of light visible and invisible to the human eye.

This effect, known as gravitational lensing, is well-known and already documented in many spectacular images, from the bending of light from distant stars as they pass by the sun to Einstein’s prediction of spectacular bright arcs surrounding galaxies. Light beams from a distant source are bent mid-course by a massive object or objects. Einstein predicted such arcs or rings in 1936. This is how, for example, it is possible to estimate how much dark matter there is in a galaxy cluster. Since dark matter only interacts with normal matter (stuff made of atoms like we are) through gravity, it will bend space around it. The amount of bending can then be used to estimate how much invisible dark matter is hiding in the galaxy or galaxy cluster.

Einstein continues to amaze us

A few weeks back, a new spectacular effect due to the bending of light was observed by a group led by Dan Wilkins from Stanford University. Not only visible light can be bent by gravity; any kind of electromagnetic radiation will follow the curved path of space around a mass. Of course, nothing could be more dramatic than what happens around a giant black hole; light gets severely bent to the point that we can even see what is behind the black hole itself. Imagine that, seeing what is behind a body.

In the recent discovery, the swirling matter being sucked into the black hole superheats, separating electrons from atoms. This spinning disk of hot plasma generates powerful magnetic fields that arc around the black hole and split in places. The light seen is in the form of X-rays, appearing as fainter echoes of the more dramatic action in front of the hole.

Once again, Einstein’s happiest thought generated something spectacular and fully in agreement with the predictions from his theory. Although he was not a fan of black holes — or of any object or phenomenon that hinted at the breakdown of the laws of nature, as happens inside a black hole — he certainly would celebrate one more goal scored by his remarkable theory. After 106 years, general relativity continues to amaze us every day.

The upcoming launch of the James Webb Space Telescope is the event of a lifetime.
Starts With A Bang

Mathematically, it is a monster, but we can understand it in plain English.
Starts With A Bang

Could fundamental physical constants not be constant across space and time?

Signals from across the universe point toward a fascinating possibility.
13.8

HR diagram: how we learned that stars evolve

After 100 million nights of people asking, “What are those twinkly lights?” it is pretty remarkable that we happen to live in one of the first generations that actually knows the answer.
Hard Science

Researchers hypothesize that these exoplanets could support the development of alien life.
Up Next
The Present

Three cutting-edge techniques – the gene-editing tool CRISPR, fluorescent proteins and optogenetics – were all inspired by nature.