You only know how hard it is to be a responsible consumer after you’ve tried it – running laps around isles trying to find that one brand you know is free-trade, reading labels to avoid carcinogenic ingredients, or looking for the organic produce sticker (5 digit code starting with 9 means organic, while 5 digit code starting with 8 means GMO). Still, after every anti-GMO petition you sign and every documentary on food you watch, the feeling of not doing enough doesn’t go away.

Buycott is an app that’s here to help you. It’s “a platform that empowers consumers to make well-informed purchasing decisions” and saves their precious dollars from getting into the bank accounts of the companies whose business practices they resent. It reveals the corporate ownership structures behind the multitude of brands on the market and makes it easier to trace whether the chips you’re about to buy has anything to do with Monsanto.

Here’s how it works. After scanning a barcode Buycott traces the brand to the parent company that owns it and then let’s you know if it’s in conflict with the campaigns you’ve joined or created. A campaign has a goal (“Avoid Sweatshop and Child Labor” or “Support Veterans”, for example) and a list of companies that it aims to support (buycott) or avoid (boycott). So, if you support gun control, for example, the App will tell you that it’s a good idea to buycott Ben and Jerry’s ice cream, and boycott Starbucks coffee. 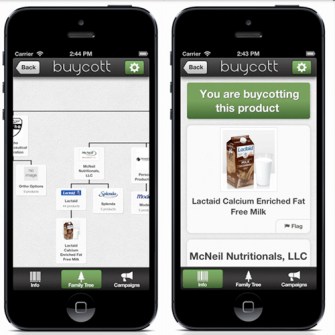 Buycott’s database is not complete and relies on its users to help maintain and improve its integrity. Still, the app could become a formidable ally in our efforts to become responsible consumers.

What Exactly Do We Owe to Our Children?

“I believe the children are our future.”  Never has a more brazen tautology graced the opening line of a Top 40 song. But when Whitney Houston popularized these words in […]