In the midst of Soccermania Grips America! you may not have heard about that hugely important ruling for the health of the planet, a recent decision by a federal judge blocking a coal mining project in Colorado because it failed to take into account the future impacts on climate change of burning fossil fuels. If it stands that ruling would make a tax on carbon look like chump change in the effort to get the U.S. to convert to cleaner forms of energy.

In the midst of Soccermania Grips America! you probably have not heard about a new ‘super’ banana that has just begun human health testing in the U.S. It’s bred by taking a gene that produces beta carotene (vitamin a) from a rare species of banana, and using genetic engineering to add that gene to the kind of banana most people eat, which could save millions from blindness and death from vitamin a deficiency. Especially in places like Uganda, where this is also being field tested. But Uganda bans foods made by genetic engineering, so whether the ‘super banana’ will be allowed there has global implications for the use of biotechnology to improve the availability and nutrition of our food.

Even with Soccermania Grips America!, you may have heard about the U.S. Supreme Court ruling that some corporations can impose the morals of their owners on their employees. It’s another of the poisonous decisions this corporation-friendly 5 person conservative majority on the Supreme Court has made, decisions that fuel the tribal polarization and value-based warfare gripping American and precluding progress on nearly every major issue we face.

What got me thinking about all this was Soccermania Grips America and the World Cup, and futbol. What a fascinating display of nationalism in the United States for a game the more popular local version of which is spelled with two Os, in which you can use your hands, points are frequent, and the ball is not round. What’s up with that!?

Actually, the same phenomenon that explains Soccermania explains the passions about those other three issues too. They all illustrate how the human cognitive system is driven much more by subconscious emotions than by a conscious objective analysis of the facts alone. And a lot of the underlying subconscious instincts that inform our feelings have to do with survival…which for us social animals depends, a lot, on the groups – the tribes – we belong to.

We are social animals. We have evolved to depend on our groups, our tribes, for our safety and well being, to help protect us from things we can’t protect ourselves from as individuals. The better our tribe is doing, the safer that makes us. Regardless of the various tribes we affiliate with at various times – our nation, local community, political party, gender, race, age, profession – belonging to a tribe, and being a member in good standing, is closely connected with how safe we feel. And that matters all the moreso these days, as a growing number of people feel that either the wealthy One Percent, or government, are taking away control over our personal lives. If we don’t feel personal control, we turn to our tribe for empowerment and a sense of control.

This hardly seems like it was in the minds of millions of Americans chanting “U.S.A., U.S.A.” following a team, or even a sport, that few follow normally. But chants of “U.S.A.” are actually chants of “Go US!”, which is just the plural of “Go ME” and MY chances of health and success and survival, because my tribe is succeeding in conflict with other tribes.

It’s the same phenomenon with the issues of climate change, or abortion, or genetically modified foods, where distinct groups have established positions based on values and worldviews, and people in those groups treat those who agree as members-of-the-tribe-in-good-standing…and treat those who disagree as the enemy.

So we root for our team, we feel connected to them, and we viscerally experience the emotions of winning or losing, even though we’re not actually playing and it seems the competition doesn’t actually mean anything to our real lives. But we root so hard and care so much (millions more Americans watched the last two U.S. games in the World Cup than watched the NBA or NFL finals) because in fact it does matter, a lot. In fact, it matters so much that seemingly bright people boldly distort or deny overwhelming evidence? U.S. Soccermania notwithstanding, the U.S. team didn’t play well against Belgium, except for keeper Tim Howard, temporarily earning him this promotion; 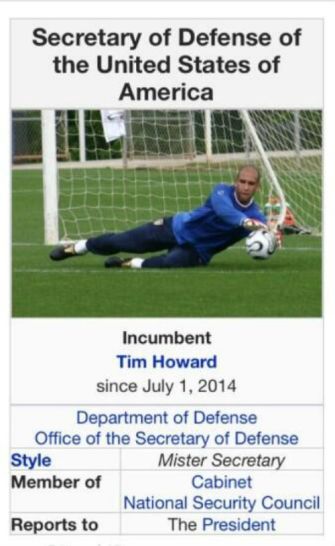 The reason is the same in each case. We depend on our tribe(s) for safety and survival. When our tribe wins we feel safer. When our tribe loses we feel less safe, less in control, more vulnerable. So we adopt views of the facts, or cheer for our teams, to establish ourselves as members of our tribe, to keep ourselves safe.

So go U.S.A! or Go Brazil/Belgium/France/Germany/Netherlands! Go Right to Life, or Right to Choose! Go “We Need to Act on Climate Change” or “Climate Change is a Hoax”! Go GMOs are Dangerous” or “GMOs are safe.” Go OUR SIDE!!! GO US! GO ME, and staying safe. Powerful stuff indeed 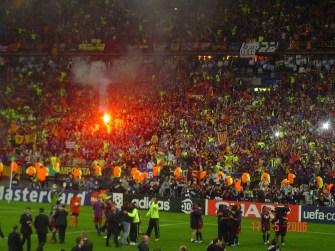 “One of the greatest challenges to the engineering of large tissues and organs is growing a network of blood vessels and capillaries,” said the scientist leading current research efforts.