If you’re anything like me, you can’t wait for summer to finally start. The Chicago winter dragged on forever and now the weather just can’t seem to make up its mind. As each day passes I get more and more impatient for beaches and ice cream and eating outdoors. However, some surprising research by Ayelet Fishbach, Professor of Behavioral Science and Marketing at the Booth School of Business, shows that, in some cases, waiting can actually make people more patient. Our intuition tells us, as does previous research, that waiting makes us more impatient–so how can this be?

Behavioral scientists find that people are pretty good at handling delays that will happen far off in the future. Given the choice between one cookie in 14 weeks or two cookies in 15 weeks, people are happy to wait the extra week for the bigger reward. But ask them to choose between one cookie rightnow or two cookies in a week – the exact same period of delay – and you may have trouble hearing their answer, given that they have probably just crammed an entire cookie in their mouth.

Researchers call this phenomenon present bias; people value things more in the here-and-now and discount their value in the future. Generally speaking, the closer the object of people’s desire, the less patient they become – although people are, perhaps unsurprisingly, willing to be more patient when the reward for waiting is higher. All this suggests that the longer people wait for something, the more impatient they should get – and this squares with our intuitions about how our impatience grows as we wait for our plane to take off or for that website to finally load.

New research by Ayelet Fishbach reveals that there are circumstances under which waiting can actually make people more patient. In work done in collaboration with Xianchi Dai to be published next month in the journal, Organizational Behavior and Human Decision Processes, Fishbach finds that when people have to wait before making a decision, they become more likely to make a patient choice (wait for a larger reward instead of getting a smaller reward sooner). 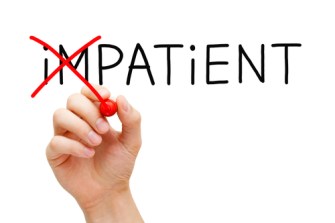 In a series of studies, Fishbach gave people a choice between a chance to win a smaller prize soon, or wait patiently for a chance to win a larger prize after a delay. In some studies the prizes were cash, while in others they included things like iPod shuffles and Godiva chocolates. Participants in the studies were divided into three groups. In the iPod study, for example, the first group could win a regular iPod that would be delivered in 2 days, or an upgraded model delivered in 27 days. The second group faced the same two options and the same 25-day wait for the upgraded iPod, but their decision was farther in the future; they could get the regular iPod in 15 days or the upgraded model in 40 days. As expected, an immediate wait made people more impatient than a delayed wait – among people who could win the regular iPod in just 2 days, only 26% opted to wait the extra 25 days for a chance at the upgraded model; among people for whom the wait was delayed the proportion of people who waited patiently rose to 37%.

The findings from the first two groups replicated previous research, but the key question was, how patient would people in a third group be? People in this third group were forced to wait before making a choice. They were presented with the same initial options as the people in the “delayed wait” group – the regular iPod in 15 days or the upgraded model in 40 days. Critically, though, they weren’t allowed to make a choice immediately. Instead, they were contacted 13 days later – at this point, they made the same choice as people in the “immediate wait” group: the regular iPod in two days or the upgraded model in 27 days. How did waiting to choose affect their patience? Among people in this group, almost 60 percent decided to wait for the upgraded iPod, almost as many as in the other two groups combined. Even though they could have won the regular iPod in just two days, people who waited to choose behaved much more patiently than people who chose immediately.

Why does this happen? According to Fishbach the answer is that waiting to decide leads people to value the choices more. That is, the mere experience of waiting to choose leads people to make the inference that the choices must be more valuable. The tendency for people to infer their preferences by observing their own behavior is known as self-perception, and companies seem to be aware of it. That’s why Apple announces upcoming products before they’re available – because having to wait for the new iPhone 6 leads people to believe that it’s more valuable, otherwise why would they be waiting for it? Indeed, when Fishbach asked participants how much they would be willing to pay for each of the iPods, people who had to wait to choose valued them more highly than those who chose right away.

*For more on this research, including a video-interview with Ayelet Fishbach, you can check out this article I wrote for the summer issue of Capital Ideas, the Chicago Booth research magazine. You can also read some of my earlier pieces on the Capital Ideas blog, including pieces on research by Nick Epley on the psychology of gift giving, and Wilhelm Hoffman on keeping New Year’s resolutions.

Turkey’s Standing Man is inspiring protesters across the country.