He had been in France working on an episode of his CNN show “Parts Unknown” when he hanged himself in a hotel room.

“It is with extraordinary sadness we can confirm the death of our friend and colleague, Anthony Bourdain,” the network said in a statement. “His love of great adventure, new friends, fine food and drink and the remarkable stories of the world made him a unique storyteller.”

The news prompted an outpouring of grief from friends and fans.

Just saw the sad news that Anthony Bourdain has died. I watched his show when I was in space. It made me feel more connected to the planet, its people and cultures and made my time there more palatable. He inspired me to see the world up close. #RIPAnthonyBourdainpic.twitter.com/Cb6IfmzylN
— Scott Kelly (@StationCDRKelly) June 8, 2018

I met Anthony Bourdain only once, while waiting in line at a food festival. Instead of hello he said “hey kid, you hungry?” and it was like I’d bumped into an old friend.
— shivana (to scale) (@toastasaurus) June 8, 2018

Stunned and saddened by the loss of Anthony Bourdain. He brought the world into our homes and inspired so many people to explore cultures and cities through their food. Remember that help is a phone call away US:1-800-273-TALK UK: 116 123
— Gordon Ramsay (@GordonRamsay) June 8, 2018 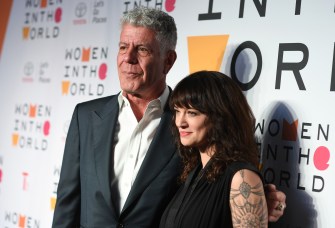 Bourdain’s rebellious, subversive spirit came through in everything he did.

Decades before he became a culinary rockstar, Bourdain dropped out of college and entered the Culinary Institute of America, turning his back on the prospect of a regular 9-to-5 life. He wanted it all: “the cuts and burns on hands and wrists, the ghoulish kitchen humor, the free food, the pilfered booze, the camaraderie that flourished within rigid order and nerve-shattering chaos.”

He started in the industry at a time when cooks still wore bandanas and smoked cigarettes on the line. They became his tribe. Bourdain characterized kitchen workers as misfits, vulgar renegades, and, sometimes, criminals. He likened them to pirates, or a submarine crew driven half-mad by adrenaline and claustrophobia, or members of “a secret society whose ancient rituals derive from the principles of stoicism in the face of humiliation, injury, fatigue, and the threat of illness.”

Throughout the 1980s, Bourdain worked as a dishwasher, line cook, and sous-chef in a slew of New York City kitchens. He lived fast and relished excess. Here’s how he described night outs with friends:

“When the clubs closed it was off to after-hours where we’d drink and do more drugs until, weather permitting, we’d hit the seven o’clock train to Long Beach. We’d finish the last of our smack on the train, then pass out on the beach. Whichever one of us woke from the nod would roll the others over to avoid an uneven burn. When we finally arrived back at work, sand in our hair, we looked tanned, rested and ready.”

The proverbial enemy of his tribe was always the customer. In his writing, which nods to the more adventurous and masculine writers of the 20th century, like Hemingway, Thompson, and Orwell, Bourdain earned the respect of fellow restaurant workers worldwide by brutally and hilariously trashing vegetarians, the Brunch People, and the “well-done-ordering pretheatre hordes,” as he wrote in a 1999 New Yorker piece, which he submitted unsolicited and was surprised the magazine ran.

In 2000, Bourdain shot to fame with his bestseller “Kitchen Confidential”, a testosterone-pumped memoir and gritty, behind-the-kitchen-doors look at the New York City restaurant scene. The book revealed how restaurant workers actually speak to each other when out of earshot of the diners: in a vulgar language of gallows humor he called “Kitchenese”. He said his goal was to accurately represent the restaurant subculture.

Soon, chefs he once idolized were asking him to come visit their restaurants. He’d “never had so many free meals and free drinks” in his life.

By the 2000s, Bourdain had given up most drugs, though he still smoked cigarettes and drank alcohol. In 2002, the Food Network premiered his first TV show “A Cook’s Tour“. The show’s format would be the basic blueprint for the rest of his TV ventures: Bourdain travels across the world, ingratiates himself with the locals, and eats dishes that reveal secrets and history of the culture.

In 2005, he joined the Travel Channel to produce “No Reservations“, which ran almost continuously until 2012 when he switched to CNN to begin working on “Parts Unknown“.

In a 2016 episode of the show, former President Barack Obama met Bourdain in Hanoi, Vietnam for a local meal.

“For whatever reason, [President Obama] seemed willing to play, and my feeling was, if we’re going to do this, we should do it right,” Bourdain said. “I mean, we shouldn’t be sitting in a banquet room at the Hilton. We should do what we do, which was hang out in some working-class place.”

“Low plastic stool, cheap but delicious noodles, cold Hanoi beer.” This is how I’ll remember Tony. He taught us about food — but more importantly, about its ability to bring us together. To make us a little less afraid of the unknown. We’ll miss him. pic.twitter.com/orEXIaEMZM
— Barack Obama (@BarackObama) June 8, 2018

In 2013, Peabody Award judges honored Bourdain’s show for “expanding our palates and horizons in equal measure.”

“He’s irreverent, honest, curious, never condescending, never obsequious,” they said. “People open up to him and, in doing so, often reveal more about their hometowns or homelands than a traditional reporter could hope to document.”

In the past year, Bourdain became a vocal supporter of the #MeToo movement, in part because his girlfriend, Italian actress Asia Argento, came forward as a victim of Harvey Weinstein. Bourdain, never short on opinions, made clear what he thought of Hollywood actors who failed to use their inside knowledge and platforms to do the same.

“I should’ve died in my 20s,” he told Biography.com in 2016. “I became successful in my 40s. I became a dad in my 50s. I feel like I’ve stolen a car—a really nice car—and I keep looking in the rearview mirror for flashing lights.”

He once said that most people who choose his kind of lifestyle are in some way dysfunctional.

“I love the sheer weirdness of the kitchen life: the dreamers, the crackpots, the refugees, and the sociopaths with whom I continue to work; the ever-present smells of roasting bones, searing fish, and simmering liquids; the noise and clatter, the hiss and spray, the flames, the smoke, and the steam. Admittedly, it’s a life that grinds you down. Most of us who live and operate in the culinary underworld are in some fundamental way dysfunctional. We’ve all chosen to turn our backs on the nine-to-five, on ever having a Friday or Saturday night off, on ever having a normal relationship with a non-cook.”

Bourdain, who’s been married twice, is survived by his 11-year-old daughter named Ariane.

The warning sides of suicide include feelings of hopelessness, talking about being a burden to others, sleeping too little or too much, withdrawing or feeling isolated, and talking about wanting to die. If you or someone you know is having suicidal thoughts, please call the U.S. National Suicide Prevention Lifeline at 800-273-TALK (8255). It’s a free, 24-7 resource.

A study of 15,582 elderly Hong Kong community residents suggests a link between robust intellectual activity and avoiding the onset of dementia.