These are just some of the accomplishments of the singer, who died August 16 at age 76 of pancreatic cancer. 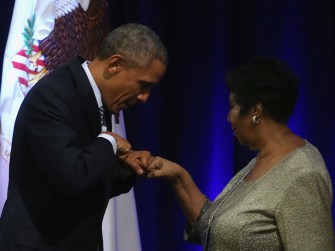 Her parents split when she was seven years old, her mother dying of a heart attack when she was 10. It was soon after that Franklin began to play piano by ear, almost as if she turned that grief into something that transcended.

Beginning with gospel songs, she started to make a name for herself. This brought her to California with her father, and a fateful meeting with Sam Cooke.

When she turned 18, she told her father that she wanted to follow in Cooke’s footsteps, and moved to New York to begin charting her success in the music industry. 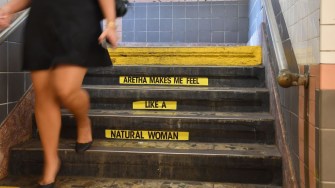 The words ‘Aretha Makes Me Feel Like A Natural Woman’ are seen at the stairwell leading to the Franklin Street subway station in New York on August 16, 2018. – ‘Queen of Soul’ Aretha Franklin passed away August 16, 2018 in Detroit at the age of 76. (Photo by Angela Weiss / AFP/ Getty Images)

Memorable and meaningful moments in her life were plenty. She toured with Dr. Martin Luther King, Jr. and sang at his funeral; offered to post bail for African American political activist Angela Davis when she was arrested, citing, “I know you got to disturb the peace when you can’t get no peace,”; she sang ‘My Country, ’Tis of Thee’ at Barack Obama’s first inauguration

There’s so much more about her, and her life, that has been recounted and told in the form of stories, that there’s no way to do it all justice.

So here are some of the quotes on Twitter from various people and organizations in recognition of who she was:

We’re very sad to hear about the #QueenofSoul passing. Rock Steady Aretha.
From your steady rock out in space. pic.twitter.com/1rbBRlRUW7

ROCK. STEADY!! Honoring #ApolloLegend Aretha Franklin and paying R-E-S-P-E-C-T to the #QueenOfSoul in the way only #Harlem can! pic.twitter.com/LR8CIppHUx

Aretha Franklin is the reason why I sing from that part deep inside of me that few could ever reach. She was my favorite and will always be. What a gift she has left all of us with her musical footprints. There will never be another like her. She was truly special. #QueenOfSoul — Kelly Clarkson (@kelly_clarkson) August 16, 2018

Finally, there is the time, in 2015, when she sang, 'A Natural Woman' at the Kennedy Center in celebration of Carole King’s official medal from the White House. Barack Obama himself commented on it later. You can see him wiping a tear from his eye early on in the below clip.

"American history wells up when Aretha sings," President Obama explained. "Nobody embodies more fully the connection between the African-American spiritual, the blues, R&B, rock and roll—the way that hardship and sorrow were transformed into something full of beauty and vitality and hope.”

NYU School of Medicine: ‘Free tuition for all students.’

Citing increasing student debt and the desire to see more family and pediatric physicians, the school might have started a trend.