After comedian Roseanne Barr described former Obama advisor Valerie Jarrett in racist terms on Twitter, ABC swiftly cancelled her sitcom, a revival of her popular 1980s show. Jarrett  has described Roseanne’s tweet as a teachable moment about race in America.

Roseanne’s “defense” — if you could call it that — was to blame the racist tirade on Ambien. It doesn’t take a rocket scientist to figure out that Ambien in and of itself doesn’t make you racist. The drug company Sanofi, who makes Ambien, even went so far as to release a statement this morning saying that racism isn’t a side-effect of Ambien. Roseanne’s defense that she didn’t know what she was doing is pretty far from the actual truth: in actual fact, Ambien has been shown to improve mental recall, but only for memories linked to negative emotions. Meaning that it may dredge up your subconscious and makes you uninhibited.

Taken correctly, Ambien helps you sleep, as it is a depressant. You’re supposed to fall asleep to it, but most recreational users have figured out that if you ride out that initial wave of tiredness you get to enjoy — the word ‘enjoy’ here is relative — a period of loopiness and silliness. In short: it’s a drug that gets you high. You shouldn’t be taking it recreationally, as it is directly messing with your hippocampus. 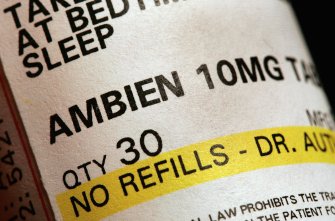 A prescription of bottle of Ambien is shown May 5, 2006 in Des Plaines, Illinois. (Photo by Tim Boyle/Getty Images)

Blacking out on any depressant drug (be it alcohol or Ambien) has an effect which some have dubbed a ‘truth serum’ and there’s actually scientific evidence to back it up: when you’re blacked out, you’re more likely to not care about what you’re saying. Your brain is still working, you’re still “you”, just a louder and worse version.

Being blacked-out stops the immediate memory, located in your hippocampus, from recording. Hence the waking up to the “what have I done?” feeling. Combine this with an un-inhibitor like Ambien and you have a recipe for disaster.

So, does Ambien make you racist? No, that’d be stupid to say. But it may incline you say racist things if you’re already racist. Ambien will dredge up those things you’ve been holding on to but don’t want to say out loud. So, in that regard, perhaps there’s an ounce of credence to Roseanne’s “I was on Ambien!” defense. Did she mean to say horribly racist things? Most likely not. But blaming racism on Ambien is like getting mad at Mrs Butterworth for not being able to fit into your jeans. Maybe Roseanne should stick to marijuana.

If you ignored FBI advice to reboot your router, don’t. It’s already a massive problem.

Common routers include devices made by Netgear and Linksys; this is a major malware outbreak.