Edgar Degas, known best publicly today as the painter of those pretty ballerinas on Impressionists calendars and museum souvenirs worldwide, earned a powerful reputation for draftsmanship during his day. Degas nearly re-legitimized pastel as a serious medium after a long period it was considered the domain of women and children.

He tried and mastered every medium he touched, including the new, inky medium of monotype. Writing years after Degas’ death, French poet-critic Stéphane Mallarmé remarked that despite being already a “master of drawing,” Degas still pursued “delicate lines and movements exquisite or grotesque” in his late monotypes, arriving at “a strange new beauty.” At the 2016 exhibition Edgar Degas: A Strange New Beauty, the Museum of Modern Art, New York, inadvertently raises the “exquisite or grotesque” question of just how strange that “strange new beauty” was. How dark was Degas dark side? 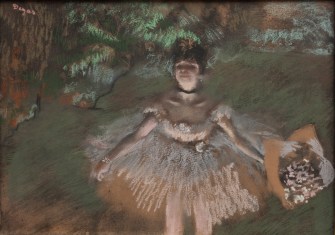 Of all the Impressionists, Degas seems the most puzzling in some ways. Immensely talented, everything seemed to come forth with ease, although his draftsmanship clearly came from years and years of intense study and experimentation. Technological innovations in monotype, a centuries-old process of printing from an etched plate, intrigued Degas late in his career with new possibilities. Throwing off the academic style of drawing, Degas took to monotype with radical zest, scraping, scratching, wiping, removing, and even fingerprinting parts of the images freshly pulled from the printing press. Perhaps Degas’ similar infatuation with photography — still in its infancy of blurs and accidents — inspired Degas to do similar things with monotypes.

Exhibition curator Jodi Hauptman describes Degas’ “mania for monotype” circa 1876 in the exhibition’s catalogue‘s introduction and pictures him “black ink to his elbows, staining his suit, dripping onto his shoes.” But how down and dirty was Degas willing to take such classic Degas’ images as the Dancer Onstage with a Bouquet (shown above)? 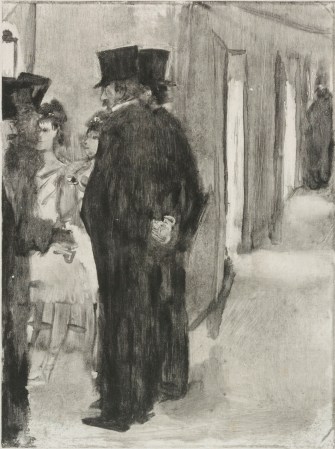 There’s always been a dark side to Degas’ subject matter. Behind the scenes of the beautiful onstage pictures of graceful ballerinas are the backstage images of practice (where young female bodies endured debilitating pain in the name of perfection) and pursuit (where young female bodies endured the desiring gaze of men). In Pauline and Virginie Conversing with Admirers (shown above), we get another scene of wealthy and influential men gaining access to the exclusive backstage area to meet the performers. Such images hold a sexual charge when painted in color, but there’s a different vibe coming across in the monotypes.

Aside from the fact that the dark-suited men physically obscure the dancers from the perspective of the viewer, there’s an overall feeling of darkness falling upon the scene. The pretense of pleasant conversation and admiration of the dance drowns in the inky blackness of the monotype. We know exactly what these men are after in these prints, whereas the paintings and pastels of the same subject literally color it over with nicer possibilities. 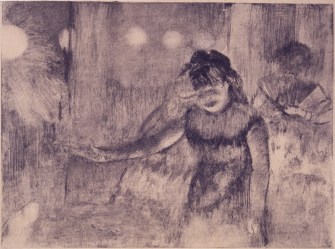 Elsewhere in the catalogue, Richard Kendall quotes Camille Pissarro writing to his son Lucien in 1891 that the politically conservative Degas was “such an anarchist! In art, of course, and without knowing it!” Degas held all the conservative views of his contemporaries on women, race, and politics despite working on the cutting edge of art. Popular art forms, such as ballet and café shows, provided material for “anarchist” Degas to comment on subtly. Or not so subtly, as in his monotype Café Singer (shown above). Whereas Degas’ contemporary Henri de Toulouse-Lautrec could capture the participatory vibrancy and fun of the café, there’s always an outsider-looking-in feel to Degas’ pictures, made more so by the ominous looking singer here, who is faceless and almost monstrous beneath a fog of distorting scratching and wiping away that nearly obliterates her.

There’s a strange beauty, yes, but also a violence to Degas’ technique. Where did that violence come from? 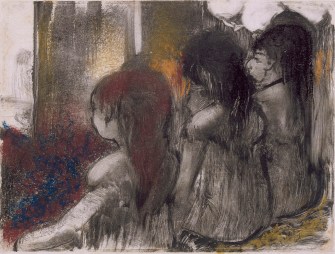 Plenty of ink’s been spilled over Degas’ misogyny. (A fuller, balanced run-down can be read here.) Degas never married because he hated women — a misogynist born into the misogynist society of late 19th-century France — goes one side. Degas reflected his times, but he also respected and encouraged the talents of some female artists, including Mary Cassatt, goes the other side. Judging solely by the pictures, however, it’s hard not to see a dark side to Degas’ view of women, as in Three Women in a Brothel, Seen from Behind (shown above).

Nameless and faceless, identified solely by their sexual profession, these women lack all humanity. The acid-colored pastel highlights dashed across the scratched surface make them seem almost monstrous. Where prostitution is subtly hinted to some degree in the backstage ballet pictures, here you see the profession unmasked. In the medium of monotype, Degas visually links ballerinas, singers, and prostitutes more clearly (albeit through murky ink and distortions) than anywhere else in his oeuvre. 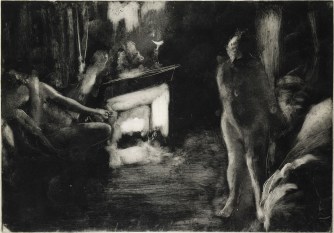 Hauptman links Degas’ infatuation with monotype to the combination of Degas having to give in to the accidents of the monotype medium while trying to control them with his own rule-breaking innovations, calling it a “combination of submission and transgression that constitutes his ‘untidy intimacy,’ this relationship between creator and what he uses to create that fuels his production.” Such “untidy intimacy” appears in works such as The Fireside (shown above). A naked woman clearly appears in the room, seen from behind on the right. Is the nude figure seated at left another woman? Is it a man observing the nude woman, but from the front? It’s hard to tell. Also, it’s a room, a place of intimacy, but the darkness broken by the light streaming from the fireplace renders the scene literally hellish.

“Degas made his most daring application of the monotype medium in depicting these female subjects,” Hauptman suggests. “The private acts of bathing and grooming became an opportunity to portray bodies in unusual and awkward positions — bones and muscles stretched, heads and limbs obscured — and to dramatically illuminate their environs.” Yet, whereas Renoir, for example, shows an affiliation for the female form in his distortions—a continuous exploration of possibilities of the flesh in paint—Degas’ experimentation seems a rejection of the flesh, a condemnation to hell. 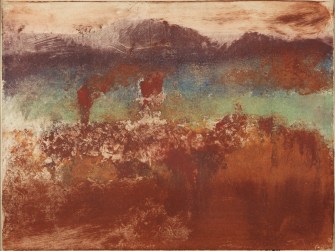 Degas’ “monotypes represent the area of his work in which he was most free, most alive, and most reckless,” critic Arsene Alexandre wrote shortly after Degas’ death, “not hampered by any rule.” Such freedom via monotype led to fascinating experiments such as Autumn Landscape (shown above), which seem decades before their time in their abstraction, as if Degas could time travel to the 1950s of the Abstract Expressionists and hang out with Jackson Pollock. Yet, as Edgar Degas: A Strange New Beauty shows, for all the strange beauty Degas could wring from the landscape with monotypes, when it came to people—especially women—the works can tell a different, more disturbing story. Looking at these monotypes anew (and this is the first U.S. show in 50 years of Degas’ monotypes) may have you looking at that Impressionists calendar in a whole different light.

Think Saturn is the only ringed world? The story is far better than that!“The phenomena of nature, especially those that fall under the inspection of the astronomer, are to be viewed, […]