Before Hipsters, there were Hippies. Whereas Hipsters in our age live a gentrifying, alternative lifestyle, Hippies dug into a whole counterculture of rebellion in search of a utopian “Age of Aquarius.” A new exhibition at the Walker Art Center, Minneapolis, titled Hippie Modernism: The Struggle for Utopia revisits the search of the ‘60s and asks if it has any meaning for 2015 and beyond. In an era where Whole Foods replaces Whole Earth, can we make the ideals of the Hippie generation sing again and “let the sunshine in”?

What exactly is “hippie modernism”? Andrew Blauvelt, the exhibition curator, explains in his preface to the catalog: “Hippie modernism marks the tension between the modern characterized as universal, timeless, rational, and progressive, and its countercultural other, which adopts a more local, timely, emotive and often irreverent, and radical disposition.” In other words, hippie modernism takes modernism’s composed futurist hope and applies it to the present, losing none of those dreams while passionately thumbing its nose at the establishment status quo. Blauvelt sees the late 1960s as “a momentary reconciliation of these seemingly opposed values as a way of resolving the impasse that faced postwar cultural modernity.” Unfortunately, that “reconciliation” of the hippie years ran into the conservatism of the post-Watergate 1970s and Reaganite 1980s. Fortunately, however, that hippie modernist reconciliation might rise again today.

Blauvelt arranges the show along the lines of ‘60s guru Timothy Leary’s famous directive to “Turn On, Tune In, Drop Out.” It’s as good as any start for the dizzying assemblage of experimental furniture, alternative living structures, immersive environments, media installations, alternative magazines, experimental books, printed ephemera, and archival films. In Turn On, Hippie Modernism hopes to blow your mind by examining the hippie fascination with expanding individual consciousness and the struggle to visualize it in images such as Ira Cohen’s 1968 photograph of Jimi Hendrix taken in a mylar chamber to distort and bend reality like a drug trip. 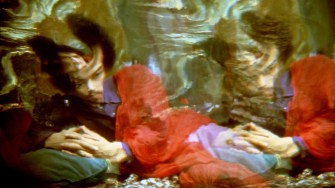 Once you’re “experienced,” you move on to Tune In, which tackles the social consciousness of the hippie movement in the face of global war and pollution.  In the final section, Drop Out, Blauvelt examines how hippies “dropped out” of mainstream society to form their own social structures that blurred boundaries between art and life, specifically the politics ruling over their lives. Starting with Ken Kesey and the Merry Pranksters’ 1964 cross-country acid trip (that got things going) and ending with the 1973-1974 OPEC oil crisis (that stopped the long, strange trip of Western progress), Hippie Modernism packs a lot of ideas into a small window, like the time period itself. 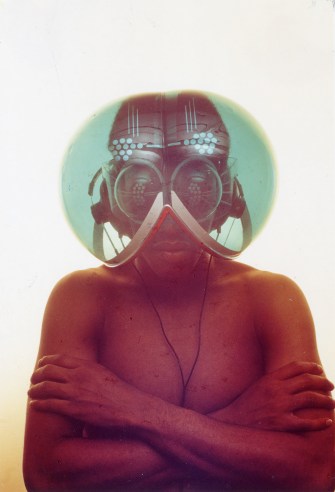 Although hippie modernism’s most striking form — psychedelic art — has won attention from its beginnings, it hasn’t always won respect. Blauvelt counters that “psychedelia follows Impressionism, not chronologically but philosophically, as the artist depicts an altered sense of reality and the objects and spaces within it.” If Impressionism belongs at the beginning of modern art, then ‘60s-style psychedelia belongs right beside it. With that in mind, much of the puzzling art of the period snaps into conception clarity. For example, Haus-Rucker-Co’s Environment Transformer/Flyhead Helmet (shown above), one of the many bubble-related (sometimes inflatable) designs of theirs, transforms from an elaborate joke into a symbol of a new way of seeing. Esther Choi sees these bubbles as “a more nuanced and pliant framework for resistance” in keeping with the peace and love times and the hoped-for “Pneu world.” “Operating like a meme,” Choi argues, “the inflatable’s elastic configuration could absorb a range of intents, associations, and purposes evolving and self-replicating virally across genres, periods, and geographies.”  Inside the bubble of hippie modernism, the whole world could unite as one. 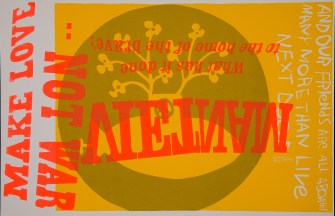 For many, hippie imagery consists mainly of the trippy concert posters crammed to the borders with text and symbolic imagery. In their essay “Agency and Urgency: The Medium and Its Message,” Lorraine Wild and David Karwan argue for a method behind that hippie madness. They see hippie modernism’s graphic design as content-driven into content-overdrive and “focused primarily on the urgency of their communication (and not, for the most part, on contemporary professional graphic design).” Underground graphic artists shunned by the “professionals” found themselves with too much to say in too little room and broke all the rules in the name of message. (The exhibition catalog designers copied this aesthetic in their choice of font, paper, etc., to convey its jam-packed messages.)  Corita Kent’s yellow submarine (shown above) belongs to this order. Kent, a Catholic nun, took the Beatles’ song and turned it into an “infographic” of love full of text that makes you scurry visually about the page. “The revolution could not be boiled down to a corporate-style logo or a simplified presentation,” Wild and Karwan conclude. “The ideas were multivalent, hypothetical, experimental, and the visual ‘argument’ of underground graphics signifies all that tumult.” 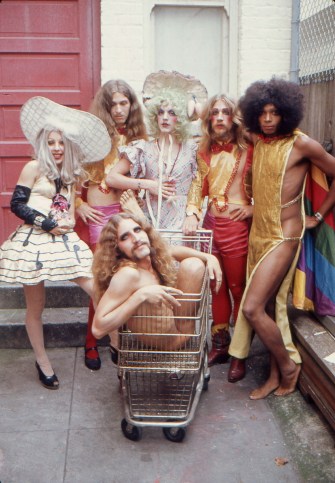 Much of the 1960s debates raged over freedom, usually individual freedoms versus the “freedom” of the free market. As Craig J. Peariso points out, Hippies saw freedom as “something like an ethos” rather than a commodity that could be traded or, dangerously, assimilated. A theater group calling itself the “Diggers” staged “The Death of Hippie” when they felt the idea of the hippie had become too mainstream and just another pose of mass culture marketing. Another theater group, The Cockettes (shown above), took those freedoms even further, asserting the freedom of sexual orientation. The Cockettes “unapologetic amateurism, their emphasis on fun over profit, and their persistent rejection of the boundaries of normative genders and sexualities made them seem like the perfect distillation of the various countercultural forces and ideas that had come together in the Bay Area at the end of the 1960s,” Peariso writes. If one image captures hippie modernism at its purest, The Cockettes might be it. 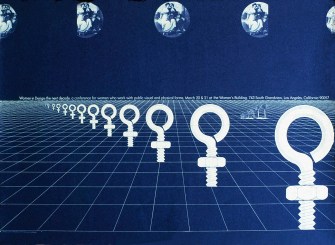 But can we recover that fun, hopeful, boundary-busting hippie modernism today? When Sheila Levrant de Bretteville made Women in Design: The Next Decade (shown above) in 1975, she probably envisioned greater progress four decades later. Perhaps the greatest attribute of hippie modernism, and the one we need most now, is the hippie power of imagination, of thinking of the unthought. Felicity D. Scott points out that some of the earliest computer visionaries of the 1970s were the longhair hippies fighting to wrest control of early computer technology from the military-industrial complex to put it into the hands of the people.

“Countercultural engagements with computer research and communications media during the early 1970s were often motivated by a utopian faith that science and technology heralded a better and more united world,” Scott writes. Hippie Modernism: The Struggle for Utopia holds that we can find that faith once again. Social media can once again be more “social” than “media,” in the spirit of GlobalCitizen.org and like-minded, “hippie” movements. Hippie Modernism strikes you with stunning utopian images of the past, but should also inspire you to dream up your own utopias for the present. “That such radical social change did not come to pass at that time does not equate to ultimate failure or an affirmation of the neoconservative backlash that followed,” Blauvelt writes in defense of the often belittled hippie, “anymore than winning a battle constitutes winning the war.” Hippie Modernism calls us to pick up the hippie “freak” flag and let it fly once more.

Want to Be Successful? Don’t Act Like a Lady.

Women are being told that competing with one another isn’t very lady-like. Nature begs to differ.