On Wednesday, Forbes published images of a new cover showing Kylie Jenner with a subhead predicting the 20-year-old is “set to be the youngest-ever self-made billionaire.”

The magazine reports that Jenner is likely worth about $900 million, considering her company, Kylie Cosmetics, has sold more than $630 million in makeup to date, and she’s likely earned millions more from TV and other media appearances.

“What her half-sister Kim Kardashian West did for booty, Jenner has done for full lips,” Natalie Robehmed wrote for Forbes. 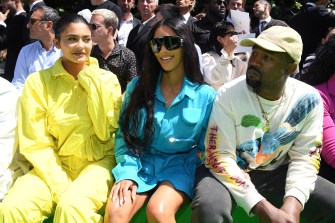 “Basically, all Jenner does to make all that money is leverage her social media following,” Robehmed wrote. “Almost hourly, she takes to Instagram and Snapchat, pouting for selfies with captions about which Kylie Cosmetics shades she’s wearing, takes videos of forthcoming products and announces new launches.”

It’s a business model that couldn’t have existed two decades ago.

“Social media is an amazing platform,” Jenner told Forbes. “I have such easy access to my fans and my customers…It’s really my only passion. I learned a lot though and just have experienced things that people my age do not even know how to handle. I do feel like people don’t take me seriously as a businesswoman because of my age and my reputation. But I do think they’re starting to.”

Forbes tweeted the story on Wednesday with the hashtag #SelfMadeWomen, prompting many to question whether “self-made” is an accurate description of Jenner’s fortune.

Jenner grew up in one of America’s richest and most-followed celebrity families. The daughter of Caitlyn and Kris Jenner, Kylie got a taste of celebrity at a young age from starring on the hit show Keeping Up with the Kardashians alongside her sister, Kendall; her half-sisters, Kourtney, Kim and Khloé Kardashian; and her half-brother, Rob.

“Calling Kylie Jenner self-made without acknowledging anywhere the incredible headstart she had is what allows people to turn around and look at poor people and ask them why they haven't become billionaires yet,” one person tweeted. “Her story is not inspiring or motivating for anyone.”

Although the show’s success can be attributed in part to each of the children, it’s clear that its existence was predicated on the already-established celebrity of their parents, both of whom have been public figures for decades.

Used in a sentence: Forbes says that Kylie Jenner is a self-made woman. https://t.co/sr8Ncd7s5A https://t.co/ehEL7Cf6KV

On Wednesday, People published a story claiming that Dictionary.com was “shading” Forbes for its cover story, causing yet another disagreement on the correct use of a word.

It is not shade to point out that Kylie Jenner isn’t self-made. She grew up in a wealthy, famous family. Her success is commendable but it comes by virtue of her privilege. Words have meanings and it behooves a dictionary to remind us of that. https://t.co/2HzIJbLb8q

Elon Musk pledges to give every home in Flint, MI clean drinking water

“Please consider this a commitment that I will fund fixing the water in any house in Flint that has water contamination,” Musk tweeted.