When Thomas Carlyle first referred to economics as “the dismal science” in the 19th century, he meant the dismal, end-of-the-world predictions economists often made.  Today, economics inspires dread not just with apocalyptic predictions, but also with deadeningly dull, distressingly dense complexity.  If economics bores or frustrates you to tears, turn them into tears of laughter with former Monty Python member Terry Jones’ new documentary Boom Bust Boom—a  look back at the 2008 world financial crisis and forward (perhaps) to the next one.  Jones (shown above) demonstrates with humor, talking heads, animation, and puppet economists how the cycle of boom, bust, and boom’s rolled over people for centuries and how we might stop it from rolling over us again. 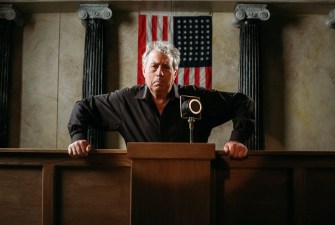 What, you may ask, qualifies a comedian to talk about economics?  In the past, Jones used his Oxford history degree and antiauthoritarian comedy to delve into medieval lives, question who really were the barbarians in the days of the Roman Empire, and ask if heroic knights of yore were just cold-blooded mercenaries.  All fine and well, you may say, but that’s history, not economics.  If you listen to Nobel Prize-winning economist, New York Times columnist, and Boom Bust Boom talking head Paul Krugman, however, economics really should be a branch of history, not the hard science that economists enamored with theoretical models would like you to believe. As Krugman and other economists point out in the film, even the most beautifully elegant model can’t reproduce real life the way history can.  Jones rides that history all the way up to the present day as a lesson in past mistakes and a warning not to repeat them, if at all possible. 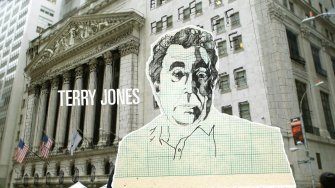 Starting with the Tulip Mania that gripped 17th century Dutchmen, to the 1720 South Sea Bubble maddening Englishmen, to the more recent 1929 Wall Street Crash insanity, Jones shows how each case followed the same mind-blowing pattern:  cautious investing gives way to euphoric speculation, which blows each bubble to unsustainable proportions, resulting in devastating busts exacerbated by mass pessimism, which leads to protective regulation, which leads to periods of stability that inspire a false sense of economic security ripe for (you guessed it) euphoric speculation, and on and on the cycle goes.  The particulars may change, but the basic story remains the same.  Using Maisie Noble’s imaginative animation (shown above), Jonny Sabbagh and Will Harper’s hilarious (sometimes musical) puppetry, a selection of economist talking heads such as Krugman known for their smarts and accessibility to the general public, and Jones’ guiding spirit of Pythonesque irreverence, Boom Bust Boom makes economics simple and interesting enough for anyone. 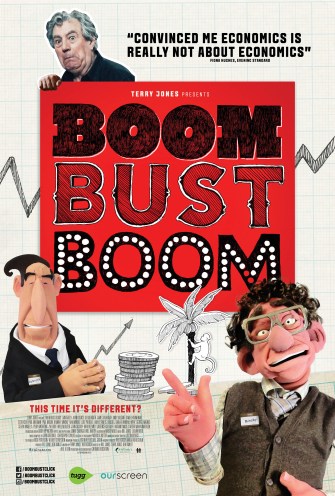 But if we know this cycle rolls on, why can’t we stop it?  Why don’t economists warn us?  One reason is that many economists make their predictions while relying on economic models that leave out “inconveniences” such as debt, which Irish economist Steven Kinsella calls the equivalent of a doctor presented with a bleeding patient who refuses to acknowledge the blood.  One economist who did see the blood and who emerges as the forgotten hero of Boom Bust Boom is Hyman Minsky (who died in 1996, but appears in puppet form in the film and above). Minsky’s “financial instability hypothesis” argues the paradox that economic stability is economically destabilizing.  In other words, when we feel too good about the economy, we tend to go crazy and ruin it.  Alas, Minsky’s ideas proved too “inconvenient” for more optimistic economists such as Alan Greenspan, who are lauded as geniuses in good times, but helplessly clueless during the inevitable crashes. 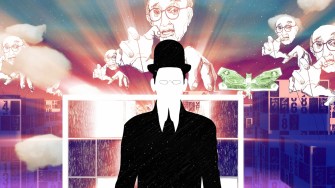 This mass magical thinking (imaginatively illustrated above) plagues economic experts and novices alike, so how can we stop it?  Boom Bust Boom even visits Yale psychologist Laurie Santos on Puerto Rico’s “Monkey Island” to show how our evolutionary forebears make the same irrational economic choices we do and argue that we may be neurologically hardwired to boom, bust, and boom again, if left to our own devices. How can we be saved from our evolutionarily irrational brains?  One answer is protective regulations, but sticking to those regulations in good times has proven impossible in the past.  The real answer lies in the study of history, something few economics students learn today.  Students from the global education initiative Rethinking Economics express on camera their frustration over this crucial gap in their learning while providing hope that the next generation of economists will remember the lessons of history and stop the cycle of financial bloodletting that bleeds the world dry. 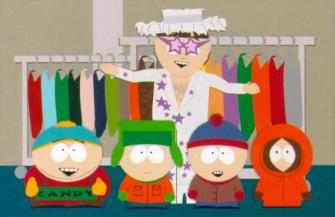 Monty Python lives on deep in the DNA of American comedy in figures such as Jon Stewart, Stephen Colbert, John Oliver, and Trey Parker and Matt Stone, the creators of South Park (shown above). Boom Bust Boom taps into that same vein of smart, smart-ass, socially conscious humor to tell an important story while offering a hopeful glimpse into a more aware, better educated, crash-free future.  When Boom Bust Boom uses South Park’s “And it’s gone…” and “Bailout” bits, you know the climate’s already there for the word to spread fast and furious to those still reeling from the “great recession” and already flinching at the next economic failure. In this election year 2016, Boom Bust Boom should be required viewing for every candidate and every voter, because we all need to learn and we all need a laugh.

Why Apple and the FBI Won’t Compromise over iPhone Security

Apple and the FBI sat before the House Judiciary Committee. The group heard testimonies from both sides about the issue, including the Director of the Federal Bureau of Investigation James Comey and Apple’s Senior Vice President and General Counsel Bruce Sewell.