It wasn’t long ago that many Americans took vacations and looked forward to them. Summer sojourns were very common — road trips, in particular. Swarms of families would take long driving excursions to the Grand Canyon, the Grand Tetons, Yellowstone, and Yosemite. These vacations frequently included several destinations and lasted at least a week, sometimes two.

For whatever reasons, perhaps more economic than anything else, fewer American workers are taking their vacation time. The 2008 Great Recession was nearly a depression and its after-effects lasted for years when the official economic downturn ended. The recession around the year 2001 wasn’t nearly as severe, but having two economic declines in a row didn’t help us Americans feel comfortable in taking time off.In fact, there has been some research conducted demonstrating that too many American workers are not taking off the time they need to relax and rejuvenate. A survey conducted by Kimble of 1,200 full-time employees who work for companies offering paid vacation time generated some concerning insights. One was that about 47% had not used their full vacation time last year. Slightly over 20% had more than five days of vacation banked. Some of the reasons for these behaviors identified by the survey were:-Having too much work to complete to take time off (27%)

-Fearing there will be too much work after returning (13%) 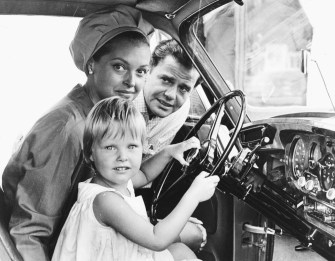 Actress Nadja Tiller at the wheel of a car with her daughter Natascha, as her husband Walter Giller looks on, during their vacation at the Lido in Venice, August 23rd 1962. (Photo by Keystone/Hulton Archive/Getty Images)

Even for the ones who said they did take some vacation time, there were some significant issues. Almost half said they check in on work while on vacation — almost 20% said they do this every day. Nearly 30% said they do so periodically. In a sense, these choices defeat the purpose of going on vacation.

Some of the beliefs the surveyed employees had which contributed to such vacation-related attitudes and behaviors were:-Believing that not taking time off would be good for their careers (14%)

-Believing that giving up vacation time for a year would be right to get a promotion (19%)Some of the more unfortunate insights were that about 7% were nervous their vacation requests would not be approved and 29% were expected to be on call for emergencies. Employers themselves can inadvertently contribute to employee expectations and fears about vacation time by the kind of company cultures they have. Broadly speaking, company culture is a combination of values, communication styles, management styles, discourse, organizational structure, roles, objectives, strategy, goals and products or services.

“It is a very simple thing but reminding employees to set up an email auto-reply which tells people the dates of their vacation and offers another contact for urgent queries makes a big difference,” said Robinson. “It sets expectations and reduces the amount of email that is likely to be waiting for them when they return.

It may be an idea to set different protocols for different methods of communication – for instance, texting people who are on vacation about work issues should be avoided. It may be OK to send some emails – as long as it is understood there may not be a reply for a few days.”

The results of a single survey perhaps are not all that meaningful in identifying a larger trend for tens of millions of American workers. However, a prior study of 7,000 America workers called Project: Time Off’s 2017 State of American Vacation report found that 43% said they didn’t take time off because they were afraid of how much work they would return to when it was over — the same fear identified by the Kimble survey, though in this case far more reported it. Also mentioned in the report from this larger survey, was the fact about 32% said they could not afford a vacation. 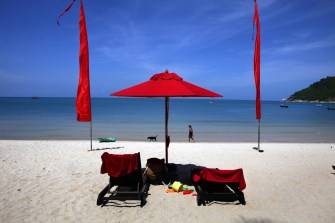 A white sand beach decorated by red umbrellas at the Anantara Rasananda resort June 18, 2012 on the island of Koh Phangan off the coast of Koh Samui. (Photo by Paula Bronstein/Getty Images)

While taking vacations may seem trivial or unnecessary, not taking time off from work could be hazardous to one’s health. A research study published in Psychosomatic Medicine concluded“The frequency of annual vacations by middle-aged men at high risk for CHD is associated with a reduced risk of all-cause mortality and, more specifically, mortality attributed to CHD. Vacationing may be good for your health.”In other words, middle-aged men with a high risk for coronary heart disease in the study had a lower risk of mortality if they took annual vacations.“Vacations are important because they not only replenish the mind, they also reduce the physical effects of stress on the body. The most important thing is that it becomes regular and you don’t start skipping. The major negative effects have been shown for people who don’t take a vacation for several years,” said University of Michigan School of Nursing professor Kathleen Potempa.Facebook Vacations Too?Because of the ubiquitousness of smart phones, ipads, laptops and free wi-fi we may be more digitally tethered than ever. Checking our phones, texting, and sharing on social media can consume a lot of time and attention. Digital screen time has become so common that concerns about its healthiness have been raised.

The research focused on social media has been conducted and these concerns have been validated. A study published in the Journal of Social Psychology came up with the term ‘Facebook vacations’ to describe the deliberate non-use of the social media network, “Our results suggest that the typical Facebook user may occasionally find the large amount of social information available to be taxing, and Facebook vacations could ameliorate this stress-at least in the short term.”

It appears that vacations today are not just getting away from work. It may also be helpful to completely unplug from all electronic devices, including the Internet, to reap the benefits of getting away from it all.Alternative medicine physician and author Andrew Weil goes even further with his idea of periodic news fasts, “A number of studies have shown that images and reports of violence, death, and disaster can promote undesirable changes in mood and aggravate anxiety, sadness, and depression, which in turn can have deleterious effects on physical health.”

So, while we are on vacation it will probably be helpful to some of us to stay away from the disturbing news, or any news for a brief period if we want the full health benefits of getting away from it all.Of course, it also matters what we choose to do on vacation because being away from work sometimes results in getting injured, sick or engaging in unhealthy behaviors. If we go on vacation when we are very stressed there may be a temptation to overeat and over-consume alcoholic beverages to compensate. We might also let go of our healthier routines and suffer the consequences.

One research study found that going on vacation could result in unhealthy weight gain, concluding that “vacations resulted in significant weight gain (0.32kg), and this weight gain persisted at the 6-week follow-up period. The weight gain appeared to be driven by increased energy intake above energy requirements. This gain could be a significant contributor to yearly weight gain in adults and therefore affect obesity prevalence.” To sum up, vacations today are not what they were even thirty years ago. We not only need to get away from the workplace, it is important to have the intention to relax, rest and sleep because doing so is essential for our health. Everyone can afford to take some time off each year, and it isn’t necessary to travel to exotic destinations. Additionally, we may benefit from taking ‘media vacations’ — deliberately reducing our screen time or eliminating it for a while.

Four cups of coffee a day protects against heart disease

We knew that coffee is good for us. Now we know why.